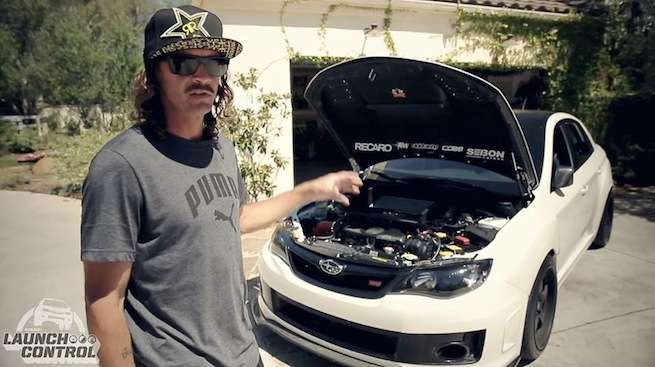 Global Rally Cross heads to Charlotte Motor Speedway this weekend and Bucky Lasek is ready to push his 2013 Subaru WRX STI to the limit.
Advertisement

Bucky Lasek has been getting some valuable “seat time” in his 2013 Subaru WRX STI RallyCross car, but he says it’s time to start banging. The 2013 Rally Cross season has been challenging for the Subaru RallyCross Team USA, but there have been some small victories. There has been some bad luck and close calls, but progress is clearly visible and Team Subaru moves closer to their goal of a number one finish.

We were wondering why Bucky Lasek didn’t seem to be competing this season in the previous RallyCross races. Bu the new episode 12 of Launch Control gives us a better idea of what’s been going on. Sverre Isachsen took a Bronze medal in the last race at X Games Los Angeles, but Lasek has been nowhere to be found. Although he was beset with a mechanical problem at X Games and was unable to advance in the rounds.

When Bucky Lasek is away from the track likes to spend time with his family, but he is always thinking about racing. His motorsport background goes back to when he tuned Volkswagens and did track days back in the 80’s and early 90’s. At home, he can be found working on his 2012 Subaru WRX STI street car that he has modified with a carbon fiber hood and set up for track time. He says it’s more fun than his twin-turbo 996 Porsche he used to own before this.

But Bucky’s has a passion for motorsports and is only passed by his desire to prove himself. With nearly two years of Rally Cross experience behind him, he is ready to make the shift from development, to fighting for a spot on the podium. According to Lasek, he’s been holding back learning the tough sport of Rally Cross.

Global RallyCross is extremely competitive and the drivers fight for every inch of track they can get. The cars literally are “banging” and hitting each other throughout the race and especially in the tight corners. The motorsport is gaining in popularity because of this intense and exciting action that takes place at every race.

Global RallyCross heads to Charlotte Motor Speedway this weekend and it sounds like Bucky Lasek is ready to push his 600 horsepower 2013 Subaru WRX STI RallyCross car to the limit. We’ll see if he can get close to favorite Toomas Heikkinnen and starts banging hard this weekend.