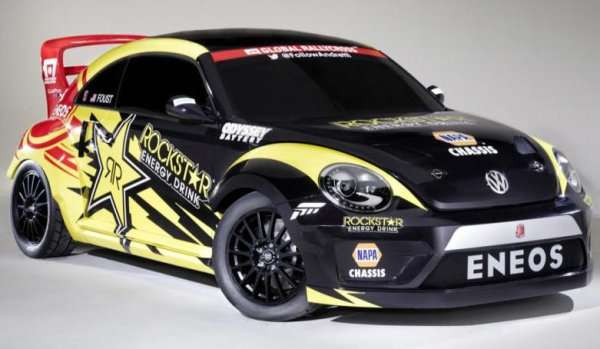 Ford Racing’s RallyCross program took another huge hit this morning when it was announced that 2-time GRC champion Tanner Foust was leaving Ford to race in an Andretti Autosport Volkswagen Polo for the 2014 Global RallyCross season. Whoa is right.
Advertisement

Andretti Autosport announced a few weeks ago that they would be entering the Global RallyCross Championship for the 2014 season and honestly, I didn’t give them much chance headed into the season after the level of dominance displayed by the Ford OMSE drivers like Tanner Foust in 2013. Andretti didn’t offer much information about their entry into the world of rallycross racing but they did say that they would be relying on Volkswagen race cars. I figured that the Andretti teams would be running a similar Volkswagen Polo to what we saw from Marklund Motorsports in 2013, but unless they got themselves some very good drivers – Andretti’s VWs would have a hard time keeping pace with the dominating Ford Fiesta rally cars built by OlsbergsMSE.

Well, Andretti Autosport’s chances are looking a whole lot better headed into the 2014 Global RallyCross Championship season as not only have they gotten a very good driver – they have gotten themselves one of the best in the sport with Tanner Foust. Foust finished second in the 2013 GRC championship standings after dominating championship wins in both 2011 and 2012. With Topi Heikkinen leaving the GRC to go racing in Europe (also in a VW), Foust and his Rockstar Energy Ford Fiesta were the early favorites to claim another title but this year’s title could go to Foust or Ford – but not both.

Joining Tanner Foust in the Volkswagen Polo and later the new Volkswagen Beetle rally car is Scott Speed…another driver snatched away from Ford and the OlsbergsMSE team. Speed is only entering his second year in the GRC but he was very strong in his 2013 rookie season with wins in Brazil and Charlotte en route to a 5th place finish in the championship standings. Speed caught some tough breaks in his first year in the GRC but when he didn’t – he was one of the stronger drivers in the field. Although Tanner Foust is the bigger news due to his previous championships in the sport, Scott Speed emerged last year as one of the league’s best drivers.

As part of their new rides with Andretti Autosport, Tanner Foust and Scott Speed will both begin the season in the same Volkswagen Polo rally car that won the 2013 World Rally Championship when the season opens in Barbados but when Foust and Speed hit the track for the X Games in Austin Texas – they will both be piloting brand new Volkswagen Beetle rally cars for the duration of the season. Foust will continue to fly the colors of Rockstar Energy Drink and Eneos lubricants while Speed’s VDub will be sponsored by 7UP.

Honestly, I am blown away by this news as both a fan and someone who closely covers the world of GRC. While I was pretty surprised that Topi left Ford to run VW over in Europe, I wouldn’t have imagined that Foust would leave a very successful Ford team for a new VW team. I would have been less surprised to wake up this morning and learn that the Olympics were cancelled than I am by the news that both Tanner Foust and Scott Speed have left Ford for the Andretti VW team. Mind – Blown. I would have to call this the biggest Global RallyCross news ever.

So Andretti Autosport has acquired one of the most successful drivers in the short history of the Global RallyCross Championship as well as one of the best new drivers but these two VW rally cars will need to prove their abilities on this new stage. The VW Polo has been very successful in Europe but they didn’t do all that well in the GRC in 2013. It is unclear who Ford and OlsbergsMSE will get to fill Foust and Speed’s positions but we know that the OMSE Fiesta rally car is very, very good. It will be very interesting to see if Foust can be as successful in this new, unproven VW Beetle as he was in the Ford Fiesta over the past three years. Should these new Andretti VWs be at least even with the Ford teams – we could very well see big things from Team VDub in 2014.