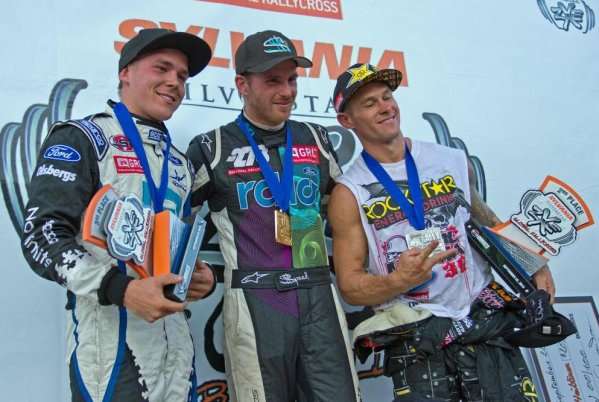 The drivers of the Global RallyCross championship headed to Charlotte this past weekend for the second to last race of the 2013 season and in a day packed full of crashes and red flags – Scott Speed took his second win of the season while Toomas Topi Heikkinen official wrapped up the 2013 GRC Driver’s Championship.
Advertisement

Unlike a great many of the venues at which the Global RallyCross series competes, this past weekend’s race at the Dirt Track at Charlotte put the drives on an actual dirt race track – as opposed to their usual venues of dirt covering an asphalt surface. This made for a better track and better racing…or least that was what many expected. Instead, fans saw a day of sloppy driving, lots of wrecks, red flags and even a temper tantrum by Dave Mirra. In the end, Scott Speed claimed his second win of the season (also his second GRC win ever) while Topi Heikkinen finished third en route to wrapping up the 2013 GRC Driver’s Championship.

The first heat race of the day saw Topi Heikkinen, Steve Arpin, Ken Block, Nelson Piquet Jr and Bucky Lasek take to the track. Topi got a great launch but appeared to have some problems as Arpin and Block passed the series point leader shortly before Lasek and Piquet also got around him. As Block pulled out to a healthy lead, Lasek and Arpin battled for second until Lasek took a poor line and ran across the track as Arpin t-boned him. During this whole mess, Heikkinen was able to battle up to second spot but when he lost a right front tire – Topi dropped out of contention and was forced to rely on the Last Chance Qualifier. In the meantime, Ken Block drove to an easy win as Bucky Lasek grabbed the second spot for his third advance to the final race over the past two seasons. In the second heat race of the Charlotte GRC event, Scott Speed, Travis Pastrana, Bryce Menzies, Dave Mirra and Patrik Sandell lined up to battle for two guaranteed spots in the finals. Dave Mirra jumped the start and took an early lead with Scott Speed second, Travis Pastrana third and Patrik Sandell was fourth. Bryce Menzies tangled with his teammate Travis Pastrana and lost the right front tire – putting him out of the race. After Mirra got the jump on the start, he misunderstood the penalty box system and rather than pulling into the designated area, Mirra pulled back onto the starting grid at the end of the first lap and came to a stop. Mirra then rocketed back onto the track but during his self-assessed penalty, the former Subaru driver dropped to the back of the field while Scott Speed took the lead with Pastrana in second. Patrik Sandell would almost get close enough to challenge Pastrana’s Dodge Dart but when his Ford lost a tire, he also dropped out of contention. Speed took the easy win while Pastrana grabbed the second transfer spot. The third heat race of the day brought out Brian Deegan, Tanner Foust, Stephan Verdier, Sverre Isachsen and Patrick Moro (in the new Chevrolet Sonic race car) to fight for the next two spots in the final race. The start was clean but as the drivers entered the first turn, Tanner Foust got too aggressive on the inside of Deegan and when he had nowhere to go, his Fiesta ST rally car hit the hydro barriers and flipped onto his roof. This brought out the red flag, took Foust out of the race and forced the other four drivers to line up for a restart. On the restart, Deegan jumped out to a lead with Isachsen close behind and while the two would battle throughout the 6 lap heat, Sverre was never able to get around Deegan’s Ford. 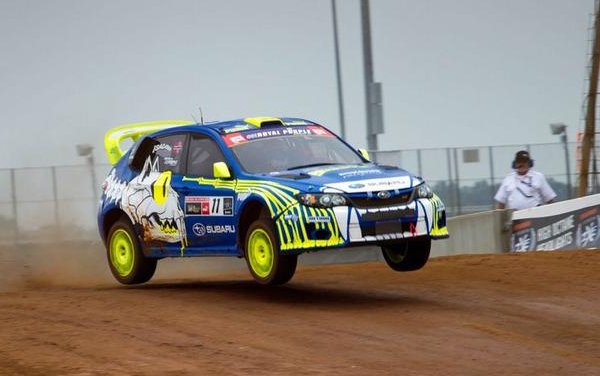 The Last Chance Qualifier saw Steve Arpin, Dave Mirra, Patrick Moro, Topi Heikkinen, Patrik Sandell, Stephan Verdier, Tanner Foust and Bryce Menzies fighting for the final three transfer spots into the final race. After a messy start with lots of bumping, Steve Arpin climbed into the lead with Verdier, Mirra and Foust following. As the field neared the first hard turn that lead into an uphill climb, Tanner Foust made a strong move inside of both Mirra and Verdier, forcing him to collide with Verdier’s Hyundai. As Dave Mirra tried to sneak beneath the other two racers, Verdier came back across the track and hit Mirra on the driver’s side – forcing him off of the track where his car would reside until the entire event was complete. AS Foust continued on, he found that the throttle was hanging and as neared the finish line, he was unable to make the turn and he crashed into the outside wall. Seeing Foust spin, Bryce Menzies and Patrik Sandell got into each other and also slammed into the outside wall where Foust’s Ford was parked. After the dust cleared, Menzies, Mirra, Foust and Sandell were all wrecked out and unable to continue so the GRC officials decided to cancel the LCQ and send the top three in the running order (Heikkinen, Verdier, Arpin) onto the finals. In the final race of the Charlotte Global RallyCross event, nine drivers were set to do battle for GRC gold. The front row was comprised of the winners from the three heat races including Scott Speed, Brian Deegan and Ken Block. Row 2 featured Bucky Lasek, Sverre Isachsen and Travis Pastrana while the back row included Topi Heikkinen, Steve Arpin and Stephan Verdier. On yet another restart with plenty of bumping and bashing, Brian Deegan pulled out to an early lead but when he got a little too far sideways in the first turn, Scott Speed gave him enough of a bump to get him too sideways to keep the car going forward and Speed was able to grab the lead but it would be short lived. As the field entered the uphill turn, Isachsen spun and pretty much everyone behind him hit his Subaru. This included Travis Pastrana, who spun on the hill as a result of the wreck and with both Pastrana’s Dart and Isachsen’s Subaru spun out in the racing line, we saw another red flag to clean up the mess.

The restart for the final race was much cleaner than many of the other starts of the day with Scott Speed jumping out to a lead with Brian Deegan in second and Ken Block in third. Topi sat in the fourth spot with Lasek fifth, Arpin sixth and Verdier in the seventh and final running spot. This was the order until Ken Block lost a tire on the third lap, which allowed Topi to sneak into the third spot. Without the left front tire, Block slowly fell back to the seventh spot but there wasn’t much other racing in the final run of the day. Speed was able to run away with the win, followed by Deegan in second and Topi in third.

This gave Scott Speed the second win of his debut season but more importantly in the grand scheme of things - that third place finish officially locked up the 2013 Global RallyCross Driver’s Championship for Heikkinen.