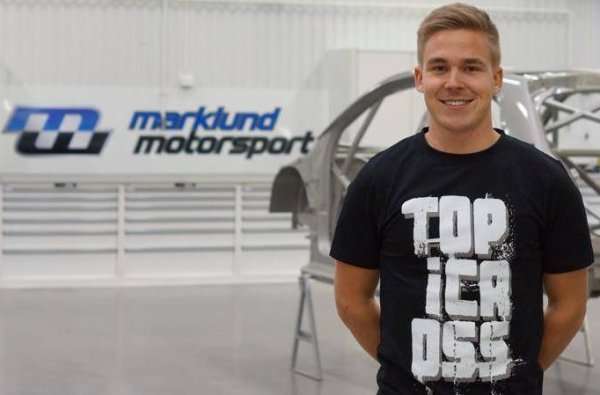 Toomas Topi Heikkinen was a major part of Ford’s complete dominance of the 2013 Global RallyCross schedule with 5 wins and the season driver’s championship but Topi has announced that he will race with Marklund Motorsports for the new 2014 World RallyCross Championship and the 2014 X Games in Austin Texas – ditching Ford to race a Volkswagen Polo.
Advertisement

Topi Heikkinen was hurt during practice for the 2012 X Games and that injury knocked him out for the season but he returned with a furious vengeance in 2013, winning 5 races, finishing on the podium in 3 others and his worst finish of the year was a 4th at the Vegas season finale. Not surprisingly, success like that allowed Topi to secure the driver’s championship ahead of the final event and Ford had the manufacturer’s championship locked up a couple weeks before the end of the season. Heikkinen displayed dominance like few other drivers have displayed in the entire world of motorsports and it was widely expected that Topi would come into the 2014 Global RallyCross season with his aim on a second driver’s championship behind the wheel of his OlsbergsMSE Ford Fiesta.

“After a successful year winning the 2013 GRC title, my goal now is to win the new FIA World Rallycross Championship with Marklund Motorsport – and nothing less,” Heikkinen asserts. “I’m confident that together we can develop a winning car and team. I want to thank Jan Marklund for this great opportunity to join Marklund Motorsport. I’m pumped for the season ahead!” He plans to do this by winning the 2014 World Rallycross Championship with Marklund Motorsports in a Volkswagen Polo RX Supercars – not the Ford Fiesta in which he crushed the competition last year in the GRC ranks.

It is unclear whether or not Topi Heikkinen will compete with his new team in the world of Global RallyCross but considering the busy schedule of the World RallyCross series and the fact that Marklund Motorsports intends to compete in the 2014 X Games in Austin Texas, it seems that Topi has left his ride with Ford and will not attempt to win a second straight GRC driver’s championship. Heikkinen will field one of the two Marklund Motorsports VW Polos in the World RallyCross (WRX) series with 21 year old Anton Marklund, the son of team owner Jan Marklund.

This new partnership with Marklund Motorsports could allow Topi Heikkinen a chance of winning the 2014 World RallyCross Championship but the young Finn could run into trouble when he hits American soil for the X Games. That race will feature the dominating Ford Fiesta teams which controlled the GRC in 2013 with Heikkinen’s help but the success of Ken Block, Tanner Foust and Brian Deegan could continue into 2014 without Topi. Even if you took Heikkinen’s #57 Fiesta out of the mix, Ford still dominated every single race with only Liam Doran’s Mini snagging a win in Germany.

On the other hand, Marklund Motorsports had a subpar 2013 Global RallyCross effort. Anton Marklund competed in the 1st, 2nd, 3rd and 6th GRC events with a best finish of 4th in the first Munich race while Buddy Rice, Mattias Ekstrom and Timur Timerzyanov filled in for those same four events with a best finish of 4th at the second of the two Munich races by Ekstrom. In other words, it wasn’t a great season for the Marklund VW Polos so if Topi wants to hang with the OMSE Fords in the X Games the team will need to squeeze a little more performance from their cars in 2014.

Aaron Turpen wrote on January 22, 2014 - 2:59pm Permalink
I think he's hoping to be top driver at a team instead of just another of several great drivers like he was at Ford.
Patrick Rall wrote on January 22, 2014 - 4:57pm Permalink
Good point. Even though he was the best driver for Ford last year in the GRC, he got less press attention than Foust, Block or Deegan...partially because his English is a little tough to follow but more so because those guys all have big followings from other activities. No doubt that he has the skills...but those Fords are awfully hard to beat.
Aaron Turpen wrote on January 22, 2014 - 5:09pm Permalink
Ya, I would wonder what VW had that can really compete with the Focus rally. Subaru and Peugeot seem to be the only real competition in that regard.