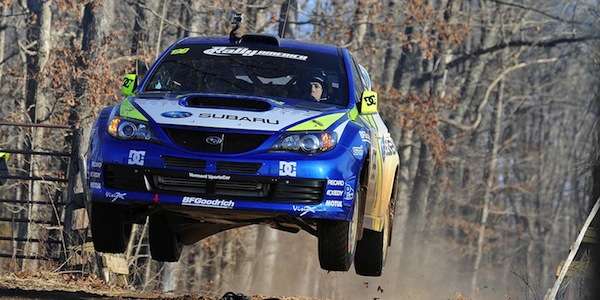 Travis Pastrana returns to driving a 2014 Subaru WRX STI at the 100 Acre Wood, the second round of the Rally America National Championship. Here’s a Q&A with Rally America.
Advertisement

It’s shaping up to be an even more exciting Rally America season and Travis Pastrana is back driving a 2014 Subaru WRX STI. Pastrana will begin his Rally America season at the Rally in the 100 Acre Wood in Salem, Missouri on February 21-22 with veteran co-driver Chrissie Beavis. He is expected to contest six rounds this year.

Pastrana joins five-time U.S. rally champion Subaru Rally Team USA teammate David Higgins who took first place at Sno*Drift Rally held in January to open the season. Higgins returns to Missouri as the man to beat, where he took the overall win the previous year. It will be a battle with Ken Block from Hoonigan Racing, beginning the season at Rally in the 100 Acre Wood to try for his seventh event overall victory. Block holds the most Rally in the Acre Wood wins of any driver.

Everyone will be watching to see how X Games action sports icon and star of the Nitro Circus television show, Travis Pastrana, will do this season. He returns to Rally Racing after trying his hand in NASCAR the last few years. Pastrana is no stranger to Rally racing and is a four-time Rally America Champion. He last competed with Rally America at this very event in 2011, but suffered a stage one crash that ended his event early.

Here is an unedited Q&A interview with Travis Pastrana and Rally America on his return to Rally racing.

RA: How much have you missed stage rally since you last stepped away in 2011? What do you want to achieve this season?

TP: Stage rally is where I always wanted to go when I was a kid. Watching WRC and seeing the drivers deal with all the different elements was something that reminded me a lot of motocross. In stage rally, it's not about being perfect, it's about making the best of the worst situations, and for me, that's a lot of fun!

(Rally in the 100 Acre Wood) will be a learning season for me. New co-driver. Faster cars. Stiffer competition. I missed Sno*Drift due to conflicts with the Nitro Circus Live tour this year, which probably takes me out of any chance at the championship. This is probably good for Vermont SportsCar and SRT USA, because I will truly be able to focus on learning and not drive over my head to chase down the leaders!

RA: You are paired back up with Subaru Rally Team USA, do you expect to be immediately competitive or do you think you will have some rust to knock off?

TP: Winning the Rally America Championship in my last full rally season (2009), there will be a lot of expectations. I’ll be driving an equally prepared Subaru as the defending champion and current Rally America points leader, and that means my car is the best of the best.

Having said that, it will take some time adjusting to my new co-driver, Chrissie Beavis, and for her to adjust to me. The new speeds of these Subarus will mean that I will have to do more then knock the rust off. I will have to improve if I want to keep up. The team is hoping that I can keep the car on the road, log the miles and be competitive by the end of the year. It won't be easy.

RA: You will have a new teammate and competitor at Subaru Rally Team USA. Do you consider David Higgins and Craig Drew your #1 competition? What about the return of Ken Block at the Rally in the 100 Acre Wood?

TP: I've never won the Rally in the 100 Acre Wood and that's been mostly due to the dominance on those fast stages by Ken Block and Alex Gelsomino.  Knowing that David and Craig beat Block there last year is impressive and I expect nothing less from them this year. I'm pretty sure I would put the car deep in the woods if Chrissie and I were to go for the win… Our main goal is to learn the car, the speed, and each other… but no one lines up without wanting to win.

RA: You had a severe leg injury this last month. Are you healing well and will be in full attack mode at the Rally in the 100 Acre Wood?

TP: I broke the two bones in my lower leg but after getting a little extra hardware, they are solid. The biggest problem is my ankle, which got dislocated. I'm not sure that I will be walking by the race but I have been given the green light to compete with a fairly stout brace. It's not ideal, but I've raced and won with worse!

RA: I'm sure many asked you how your rally skills would help your NASCAR career. Now that you've raced stock cars, did that motorsport better prepare you for rally racing?

TP: Racing is racing. It all helps but I belong on the dirt. Rally is my sport and Subaru is my car.