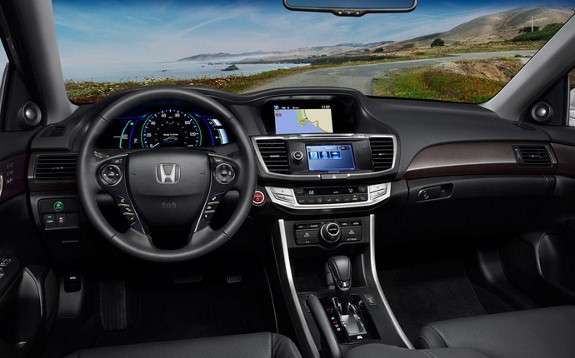 As Honda records historical Accord and Civic sales in North America, Toyota heats up the competition with the introduction of the Prius “C”. Today we explore the base root of the Hybrid equation with a closer look at Honda’s Superior iMMD technology Vs. Toyota Synergy Drive.
Advertisement

Soon to be North America’s "Car Of The Year," the 2014 Honda Accord has blown the doors off of the competition with a stated 50 mpg EPA Highway rating. Weighing in at over 3,000 lbs, this 5 passenger midsize automobile is a “true Hybrid,” meaning that the car can be driven in EV ( electric motor) only mode.

While Toyota does hold title to the best selling Hybrid in the United States through the expanded Prius line, the 2 Japan based automotive giants take a different mechanical and electronic engine/motor management approach to the Hybrid. And there lies the difference.

As of 2014 the Civic Hybrid, CV-R and the Honda Accord can launch off of the light in EV ( electric car) mode. Through Honda’s iMMD “Earth Dreams”( intelligent multi- mode drive) the car offers the driver 3 distinct driving modes, but always comes off the light in EV. It also has the capacity for extended electric only driving mode. And as with the Prius, shuts down when sitting in a stationary position. In driving the Accord we find the car to be eerily quiet, torque happy and road responsive. The gasoline powered generator/ helper engine rarely engages under 40 mph. In EV mode the gasoline engine is disengaged from the CVT, then reengaged for brake regeneration when decelerating to a stop.

Other than a very minor electric drive noise and seamless CVT engine/ transmission interaction, the Hybrid Accord is twin- similar to your gas powered model.

When not cruising down the Freeway at high speeds, unless you select engine mode, the car is effectively a full time electric vehicle. Due to Honda’s advanced automotive technology, Accord is the first mid size sedan in North America to surpass 50 mpg.

Toyota has opted for a small displacement gasoline powered engine working in tandem with an E-CVT. Their version of the CVT utilizes a split drive variable gear set that transfers engine or motor generated propulsion to the drive wheel. You can find the specifications here.

While both systems are complicated, Honda’s computer controlled infinitely variable transmission coupled to a variable valve timed low friction near zero emissions engine, appears to be the winner in the Hybrid competition for 2014.

As Honda outsells Toyota in Japan, we’re confident that it will only be a matter of months before the Japan based giant counters Honda with a new generation of super efficient EVs and Hybrids.

Eric King wrote on January 31, 2014 - 1:04am Permalink
I am hoping that this will become the standard for all motor production across the board for all makes and models of the future.
sipho Frank Siphanga wrote on September 29, 2017 - 3:42pm Permalink
helo,pls give me the price cz i need the Honda Accord.