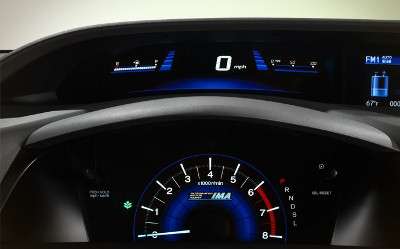 Civic Hybrid vs Prius a matter of style and brand loyalty

In comparing the Civic Hybrid to the Toyota Prius we discover a coin toss as to price, fuel efficiency and overall car quality. For most, the decision will be one of body design and brand loyalty; something that both marks depend on.
Advertisement

There’s no arguing the fact that the Toyota Prius is the mass manufactured hybrid that first captured the imagination of the driving public. Although an absolute dog when it came to off the line performance, the little hatchback offered 40+ mpg on regular gasoline while seating 5 (small) adults in relative comfort.

But, it isn't the only player on the field and Honda delivered a small but viable “Insight” to the public first; years before Toyota’s introduction of the Prius. Tuesday found American Honda Motors releasing price and EPA data for the 2014 Civic. This information compelled me to compare the two Hybrids as Honda contemplates the death of the Insight.

The question... Which car offers the most value for your dollar spent?

For the Honda loyal, Civic is the logical replacement for the undersold and under-powered original modern Hybrid. We're not finding promotion coming from Honda as to a new and improved 2015 Insight. Many in the industry believe that the Insight will go the way of the Prelude.

As to the Prius design, either you like a hatchback or you don’t. It doesn't come in a coupe or sedan configuration. This is where Honda enters the competition with the 2014 Civic Hybrid.
For those that prefer the conventional look and driving characteristics of a sedan, the Civic or Accord Hybrid may be the Eco- answer for you.

While Honda and Toyota’s engineering approach to achieving unprecedented fuel economy varies, it appears that the Honda Civic offers a handful of standard features that the Toyota does not. Of-course this is underplayed by Toyota in their side by side comparison of the two vehicles.

For those wishing to squeeze every mile out of their gas dollar, Toyota wins the average mpg contest.

While Honda rates the Civic Hybrid @ 44/44, the standard Prius claims 51 mpg city, 48 mpg highway. These numbers indicate that the Toyota runs in the electric motor or regenerative brake mode a greater percentage of road time than the Civic does. Toyota’s a bit tight lipped about how they do this. Part of the equation is the under 3,000 lb weight of the Prius, body aerodynamics, hard tire compounds and engine fuel management.

Looking to Honda’s Eco-assist propulsion platform we find that a secondary electric “helper” motor attached to the CVT transmission assists a very small 110 hp 1.5 liter SOHC i-VTEC 4 cylinder engine, producing adequate yet less than impressive torque. Neither car is known for stellar performance. For that you can upgrade to the Accord or Tesla S.

None the less, the owners of the Civic Hybrid as well as the Prius that I've questioned express an undying love for their chosen brand. Where I find the greatest value for the dollar is when we compare the fully loaded Civic Hybrid leather interior with navigation against the Prius 4 or 5.

We find that the “big” Prius 5’s mpg falls to 40 city and costs no less than $3,000 more than the loaded Civic. But then again, the current Civic doesn't offer the utility of a hatchback. To go there in a Honda one may wish to consider the Hybrid C.R.-V.

Several of my associates drive a Prius. They like the car for its utility and great mileage. The most common complaint is a general lack of passing and grade speed on the Freeway. While the Civic is not comparable to a Honda CR-Z Hybrid Coupe in performance, it does hold its own in city and Highway traffic.

The Eco-assist is effective during high speed Highway passing, and grade down sifts. Although you won't sense much acceleration change through the CVT transmission. And, while I do find the overall ride of the Civic to be a bit stiff, I like the handling as well as the fit and finish of the affordable Honda Hybrid. However, with 4 Prius models plus the tiny Prius “C” to chose from, #1 Toyota is not handing the Hybrid title to Honda any time in the near future.

Bob wrote on January 9, 2014 - 10:49am Permalink
I'm not sure how you can compare a Prius or especially a Prius V to a Civic. The normal Prius has 21CtFt of trunk compared to the Civic's 10, so a family of 4 couldn't really ever take a family trip in a Civic. And the Prius V has 34 CuFt, similar to a CRV. The thing is that if a Prius is what meets your needs in terms of space, then it's unlikely you'd be in the market for a Civic-sized vehicle. If you were, then you'd compare it to a Prius C that costs about $20k.
Parks McCants wrote on January 9, 2014 - 5:18pm Permalink
Good day Bob. You've made a handful of thought provoking points. Thanks for that. As with most cars, I find them to be often populated by 1 or 2. But I do acknowledge the advantage of the Prius over the Civic as to 4 person and luggage capacity. I believe the "C" to be smaller than the Civic... Tell us about the over-all performance of your Prius. Thanks.
JohnQ wrote on January 10, 2014 - 9:56am Permalink
One might also note that historically, the Prius has been much more reliable than the Honda Civic Hybrid. A few years ago Civic hybrid batteries were failing, and Honda responded by pushing out new IMA hybrid system control software that decreased fuel efficiency in an attempt to preserve battery life, which led to multiple lawsuits from dissatisfied owners. Toyota on the other hand never had major problems like that with their hybrid batteries. The toyota HSD drivetrain is also mechanically much simpler than the Honda IMA drivetrain. Whereas Honda IMA uses a conventional belt-and-pulley CVT transmission and fluid-coupling torque converter, Toyota HSD uses a simple planetary gearset. Prius HSD has a total of just 27 moving parts, it is simpler with far fewer potential failure points. Any wonder why one sees so many hybrids with planetary drive used as taxis (Toyota Camry, Prius, Ford Escape Hybrid, Nissan Altima Hybrid) while hardly any Civic hybrids were seen in such use.
Sean wrote on January 10, 2014 - 11:47am Permalink
I bought my Prius in 2009 and couldn't be happier. I now have just over 100,000 miles on it, including a cross country move from California to Illinois where the car was loaded with 2 people, 3 dogs (12, 22, and 45lbs) and everything I needed to live for a 2 month period while I waited for my belongings to be delivered. The only issue I've had with my car is that the stereo went haywire around 60,000 miles and needed to be replaced. I'm eagerly awaiting the arrival of the 2015's!
Joe wrote on January 10, 2014 - 12:48pm Permalink
The Civic is unable to run in EV-only mode, the Prius can. Thus depending on driving conditions, the fuel efficiency is VERY different….also very different driving experiences between the two vehicles. For example try driving the civic in stop-and-go traffic. The gasoline engine will kick-on every time you take your foot off the break. Gets a bit jerky. The prius does not, it stays in electric more often than not, until you get moving. I've met several Honda loyalists who note the civic hybrid was a disappointment. If/when Honda switches to their completely redesigned Hybrid power-train for the 2015 civic hybrid, this might be a different discussion…but until then, I find more Honda fans looking for Hybrids choosing prius over civic. The Accord hybrid might finally change that theme, but it just came out…to soon to tell.
Parks McCants wrote on January 10, 2014 - 2:54pm Permalink
Good points all... The extended EV mode of the Prius explains the higher mpg rating. It appears that Honda has remedied a handful of mechanical, transmission, engine and motor management short falls with the Japan only Fit Hybrid; claiming an average mpg of 80+. It does take off the light in EV only mode. Perhaps the latest generation Civic will share common drive attributes. Will see.
Rajan wrote on April 30, 2016 - 12:10pm Permalink
i wanna buy a car in usa.. which one should i prefer toyota prius or honda civic or honda fit
Rakesh Sharma wrote on February 10, 2018 - 8:55pm Permalink
Toyota and please only Toyota. Because east and west Toyota is the best.
Parks McCants wrote on February 12, 2018 - 5:48pm Permalink
Much has changed since this article was written in 2014. However, a used Civic hybrid can be a good choice for those buyers on a budget that prefer a conventional 4-door sedan layout, Cheers Rakesh!