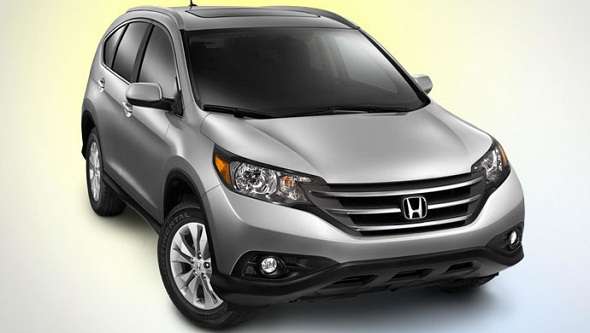 As a clean diesel technology Honda City goes on sale today in India, I am reminded that in a not too distant future the Honda CR-V will average 70+ mpg on diesel fuel.
Advertisement

On January 3 Honda announced that the very successful 2013 CR-V crossover had joined the Accord and Civic in the over 300,000 cars sold per year segment of American Honda Motor Company. Not a small accomplishment in a very crowded small SUV segment.

Honda recorded the second best sales year in the company’s North American history and came in just behind Chrysler with 1.5 million units sold in 2013.

What appears to be driving CR-V sales is not only an increase in new buyers but the return of satisfied owners looking to upgrade to a 2014 model. According to owners interviewed, while the interior and exterior dimension of the 2014 remains unchanged, the vehicle has an improved ride, reduced road noise and upgraded satellite linked navigation and personal communications interface.

In speaking with Paul Casey of the Kendall Auto Group, Eugene, Oregon, buyers are very happy with the overall quality and performance of the CR-V and love the new 7” phone- navigation touch screen monitor.

While the 2014 CR-V is the most fuel efficient cross-over in its class, claiming 31 mpg highway on gasoline, I propose that Honda take it a step further by offering the 1.6 i-CID-1 inline 4 “clean diesel” as an engine option.

Currently available in Europe, I believe it’s time for North America to enjoy the economy, efficiency, and torque of diesel power.

Honda has announced that an EPA Tier 2, B 5 compliant direct injected clean diesel will be available in North America no later than model year 2016. Honda will meet stringent EPA emission standards by utilizing a 3 stage catalytic converter proprietary to Honda. Currently offered in Europe and Asia as an “Earth Dreams” option, versions of the 1.6 and 2.2 liter diesel engine can be found in the Accord, CR-V and City.

Although the “City” is a smaller car based on a Fit platform claiming 26 kmpl, it gives us a glimpse at the future, as Honda and other manufactures flirt with 70 and 80 mpg fuel efficiency.

Think of this... A 2016 CR-V diesel hybrid, featuring Honda “Earth Dreams” propulsion technology and "smart" 4 wheel drive control management. Now that would be worth waiting for.

Parks McCants wrote on January 6, 2014 - 9:52pm Permalink
Looks like the future in the fuel efficient small cross-over SUV segment will be lead by Honda.. Thoughts?
Jack wrote on January 31, 2014 - 12:40am Permalink
Honda should do it before Hyundai gets the idea, whoever does it first im buying.
Cidusa wrote on April 26, 2014 - 5:37pm Permalink
Honda diesel is the most awaited engine in USA and if comes in a hybrid form too all the better
Parks McCants wrote on April 26, 2014 - 7:29pm Permalink
Thank you Jack and Cidusa. We know that Honda reads our column. It will be interesting to watch the propulsion development in the quest for greater fuel efficiency.
Mike wrote on November 13, 2014 - 9:27pm Permalink
Please keep it simple Honda, no need to hybrid a diesel.
Greg wrote on October 10, 2014 - 10:33am Permalink
I have been waiting for Mazda to roll out their diesels, and the lack of communication about the continuing delay has me pulling my hair out. I would gladly buy a diesel CR-V if Honda can get it to market soon
CIDPUSA wrote on October 10, 2014 - 12:02pm Permalink
The diesel Honda CRV is selling in India , I think USA is a much larger market for this vehicle.
Jerzy Szyr wrote on February 7, 2015 - 7:47pm Permalink
I like to know more about diesel Honda CRV, and when it will be available.
Will wrote on April 6, 2015 - 5:54pm Permalink
Honda has had the diesel for years around the world but Oil and money keep it off our shores. We will never get the diesel Honda in the US. If we were to get it, the line would be out the door for months.
CIDPUSA.org wrote on April 7, 2015 - 11:01pm Permalink
I hope the Diesel CRV shows up in USA , I am waiting for a Diesel
Jean Rene joseph wrote on April 24, 2016 - 9:45pm Permalink
I will like to buy one of the new crv diesel. Please send them in
Parks McCants wrote on April 26, 2016 - 9:41am Permalink
Welcome Jean Rene. We won't see a diesel CR-V introduced to North America. The 2017 CR-V will be released with a fuel efficient small displacement turbocharged gasoline engine. Hybrid? maybe. I'll keep you posted on updates here.
jean rene wrote on April 13, 2017 - 6:09pm Permalink
I understand that 2017 diesel model won't be coming to the USA. But what about for future years? Are you aware if the 2018 diesel model might be coming to North America?
Joseph J Pillitiere wrote on April 24, 2015 - 8:54pm Permalink
Honda CRV diesel When
Andre Lisee wrote on February 22, 2016 - 5:12pm Permalink
Diesel is the only way to go, I have a VW jetta and it is by far the best car I ever own. If honda CR-V diesel is available I will be the first in line to buy one.
Parks McCants wrote on February 24, 2016 - 10:17am Permalink
Thank you Andre for your comment. 200,000 trouble-free miles is not uncommon for Jetta, I like that.
Imran Khan wrote on February 23, 2016 - 6:03pm Permalink
What keeps the diesel away from USA? The largest highway system in the world would love to have a honda diesel running arpound the country specially California, where the unoffical driving speed is 80 MPH.
Parks McCants wrote on February 24, 2016 - 10:14am Permalink
I agree! Unfortunately due to the recent Volkswagen emissions blunder, it will be years before the buying public embraces diesel power (once again) as the preferred car or light truck engine.
Andy B wrote on May 3, 2016 - 6:53pm Permalink
I too want to see that Honda CR-V Diesel in the states. I'm under the impression that the automaker paradigm doesn't want to see it. They like us spending at the pumps... Very Very unfortunate about VW ... best little diesel around for years... big blunder... shucks, who's to say.