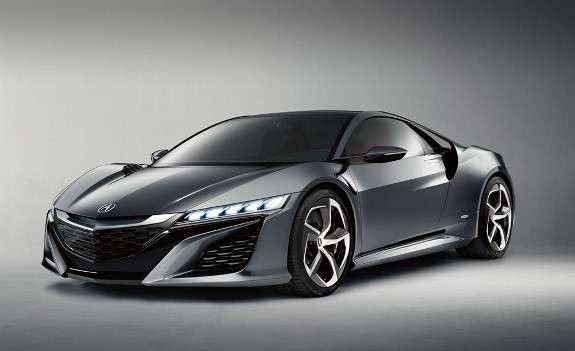 NSX didn’t return to Super GT in 2014 and won’t be competing in World Challenge Tour Class. Lost in the design room since 2006, the NSX loyal ponder the return of what could prove to be the most advanced hybrid production Supercar on the planet.
Advertisement

Supercar: “A very expensive and fast sports car.” According to the English Oxford dictionary, the term Supercar was first coined in 1920 in reference to a Bentley Speed 6.

The Honda NSX, branded as an Acura in Hong Kong and the United States was introduced to the world in 1989 at the Chicago Auto Show; and has enjoyed a cult status ever since. This author drove one in 92.’ Back in the day of the Ford GT, Lotus Elan and Mangusta, the NSX stood out as a rare bird in a cage a gilded excess.

The car was by import sports class standard was exceptional in its performance, understated style and trouble free reliability.

The original (NS-X) was developed by Honda to take on the then formidable Ferrari 328. The F1 inspired 2712 lb aluminum bodied 3.0 liter VTEC V6, captured the imaginations of a burgeoning tech savvy society; ready to embrace a trouble free Japanese built street legal supercar.

Despite a relatively low horsepower and torque output, the aluminum bodied NSX recorded 0-60 mph times of 5.7 seconds, fast, even by today’s standards.

The NSX would be manufactured with several cosmetic and mechanical upgrades for 15 years, but would leave the market in 2005; with promises of a 2nd generation always within arms length of those wishing for one.

Honda’s 2007 announced return of the supercar for model year 2010, was retracted due to the world recession of that decade.

Although a NSX replacement( HSV-010) would race the GT500 class in 2010, the Honda loyal would not hear of a new Ohio built NSX until the unveiling of a concept car at the 2012 North American Auto Show.

If Acura holds true to the concept, the next NSX will be like nothing else on the planet, if in-fact it ever comes to market on planet Earth.

John Goreham wrote on March 17, 2014 - 1:55pm Permalink
Always a year away... I lost interest in Honda/Acura as any kind of sports car company after the Integra and S2000 were killed off. An NSX hybrid is not going to make me want a CRZ.
Raymond Max wrote on March 17, 2014 - 5:31pm Permalink
True enough. Honda/ Acura is good at flashing the concept card. How about an affordable low-tech 2 seat roadster with an obtainable price point/
AZVTEC2015 wrote on March 18, 2014 - 3:25am Permalink
2015 will be different, We will have the Nsx, the 280+ hp civic type R, and a return to Formula 1.. I see an exciting trend happening here..
Parks McCants wrote on March 18, 2014 - 12:54pm Permalink
AZVTEC2015. Welcome. Yes, I see the handwriting on the wall. Honda/Acura is absolutely dancing on the edge or innovation and Hybrid development across the line.