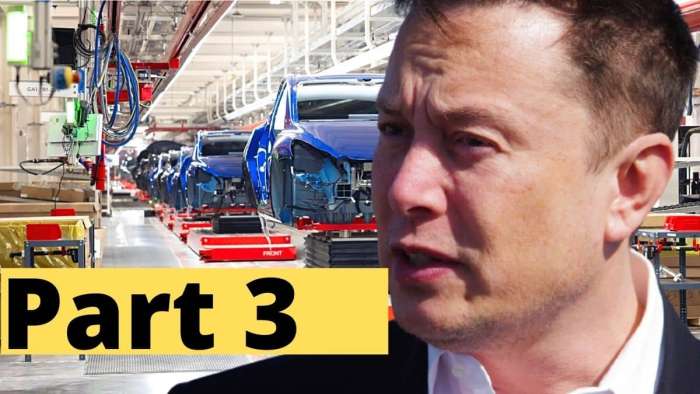 Tesla's Secret Master Plans Are About to Have a Part 3

Elon Musk has made two master plans for Tesla since being involved with the company. Master plan part 1 is this:

Tesla succeeded in this plan and thus, Elon Musk made a master plan part 2 that goes like so:

Some of these are still in progress. Tesla has yet to release the Cybertruck, a compact car, and a Tesla Van to address all major vehicle segments. Tesla Energy is complete and solar roofs with integrated battery storage are now available. Tesla FSD is not quite 10x safer than a human, but is on the way. And lastly, having your car make money for you is still a few years away most likely.

My guess is that Elon Musk sees the road to achieve all of these goals and no longer needs to be involved in the day-to-day operations in order to get there. That's why I think his attention is now on a master plan part 3.

There's been quite a few people trying to predict what Elon Musk's master plan part 3 might be. Here's two predictions, followed by what I think it will be:

Converting the world to sustainable energy means all energy - for vehicles, for homes, for everything. Dramatically expanding the global economy will largely be driven by Tesla Bot and its solving human labor that is mundane and/or dangerous. And lastly, solving artificial general intelligence will be one of the biggest human breakthroughs ever - if not the biggest. I think these are good predictions.

* Develop the best AI training supercomputer in the world
* Solve real-world AI with billions and billions of training cycles
* Build hundreds of millions of Tesla Bots to eliminate the need for dangerous, boring, and repetitive jobs
* Remove labor as the fundamental limiting factor of the world wide economy

I think these are good predictions as well and there is some definite overlap with Steven Mark Ryan's predictions. I do think Tesla Bot and AI will be a big part of Tesla's secret master plan part 3.

Here's what I think Tesla's secret master plan part 3 will be and I'll explain why after:

I believe this 3rd master plan will be much more focused on artificial intelligence and less so on sustainable energy. I think the sustainable energy portion of things is a train that cannot be stopped at this point - it is going to happen barring a world-wide catastrophe.

The next great task is Tesla Bot and the solving of human labor. I think this is what Elon is focusing on more and more. The AI for FSD is likely part of this, but I think with Dojo and Tesla continuing to train with more and more data and cars with FSD, this will be solved without much intervention from him.

If Elon is able to pull off solving labor and creating artificial general intelligence, it's going to create a world the likes of which most people cannot imagine. Imagine having everything you need - a Star Trek world - what then becomes your life's purpose? What is the meaning of life if you don't need to have a day job? It's a very profound question worth pondering.

What will Elon Musk put in his Master Plan Part 3? Will artificial general intelligence be part of it? Can Tesla solve human labor and expand the global economy?