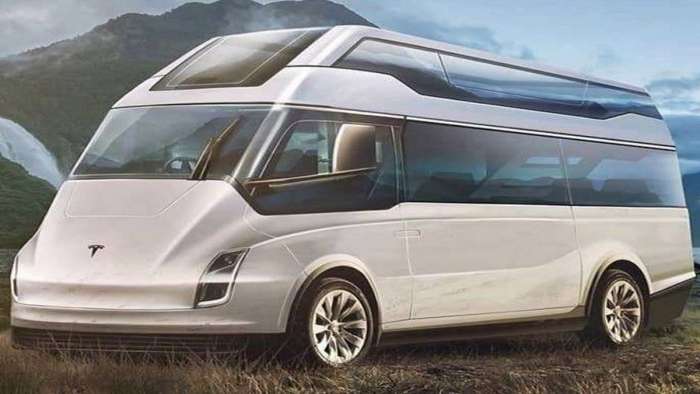 The Tesla Robovan - A Van Designed for Those With Disabilities

We heard that Elon Musk was mentioning the Tesla van - a robovan, that would be designed to be convenient for those having disabilities and solar charging. This was at an all-hands meeting at Tesla recently.
Advertisement

Maybe interesting to work with Daimler/Mercedes on an electric Sprinter. That’s a great van. We will inquire.

Elon Musk has given some perspective on the Tesla van over the years. There is one Tweet about it and he's talked about it on Tesla earnings calls in the past. He also talked to Joe Rogan about it in an interview. Elon Musk told Joe Rogan that the van's design would be more favorable for solar panels for stationary charging.

I believe the van is good for solar panels because it will just be bigger and have more surface area - more room for solar panels. There is a group of people who live in vans like nomads and the Tesla van would appeal to this group of people. If Tesla made it so that you could have a van with and without seats, I think there are those that would pay for just a base van with a driver and passenger seat where the owner could put whatever they want in the van - for those who live the "van life".

Elon Musk has also stated in earnings calls that Tesla is definitely going to make an electric van at some point. And I like the idea of having solar panels on it. With the large surface area on the roof and even some fold out wings, you could get 30, 40, maybe even 50 miles a day of charging.

Serving Those With Disabilities

Have an area in the van that has a lot of space where 1 or 2 wheelchairs with someone in them could easily fit.

Have the ability to extend a ramp out of the van that is already built in, that a wheel chair can go up. There could even be a device that hooks on the wheelchair and pulls it up the ramp into the van.

Have a back entrance to the van with an open area that make it easy for someone with a wheel chair to go up and in the van with the same ramp or some kind of lift that operates electronically. There could even be some kind of strap or easy to use clamps that keeps the wheel chair in place and has seat belts for it.

When Will We See the Robovan?

With the CyberTruck not going to start production until late 2022, I think we are seeing a pattern of Tesla releases. And that is that no more than 1 vehicle type is getting released a year. Unless Tesla builds more Giga factories, I think this is going to be the case.

In 2023, we will see the Model A - Tesla's compact car that may or may not have a steering wheel and pedals. We could see the Tesla Roadster that same year because the Roadster won't have to get to huge numbers of volume production.

In 2024, I believe we will see the beginnings of the Tesla van. Tesla needs to do some market research and figure out what the needs are for this vehicle. It certainly could be used as a robotaxi for transport and to assist those who are disabled in being transported - like a medical transport.

I expect that we'll hear about the Tesla van in about a year's time and the expected date, which I think will be the second half of 2024. The cost will likely be less than the CyberTruck if Tesla can make the design very simple with just 4 edges and not many parts being put together.

What do you think of the Tesla Robovan? Will Tesla release this before 2024? How will it help those with disabilities?

Mark A Farris wrote on September 7, 2021 - 1:11am Permalink
The Robovan I think would be a great idea for those like me in a wheelchair. I would like to see a lift instead of a ramp. My arms and legs are to weak to get my wheelchair up a ramp. Great idea, just worried about the price. Most in wheelchairs are on a fixed income like disability. Thank you in advance,God bless.
Jane Hastings wrote on October 4, 2021 - 10:18pm Permalink
There is a system where there is a pin fixed beneath an electric wheelchair. It locks into a lockdown device that sturdily holds it in place. With the push of a button, it releases. The ramp deploys and retracts with a button push. Two family members simultaneously made us have such a van, but Tesla's would have been better.