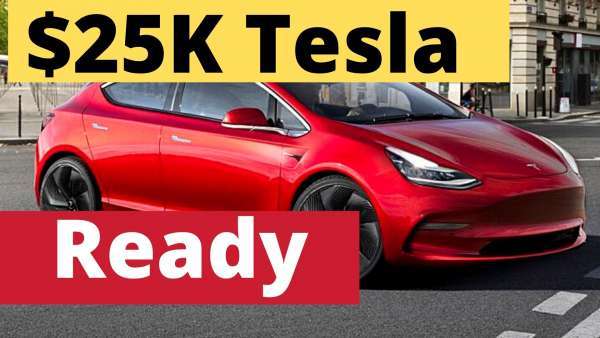 According to an insider report, Tesla is already preparing for the production of the cheap Tesla Model 2. According to this, test production will start in China in the coming weeks. The new vehicle will be offered for around $ 25,000.

Twitter user Ray, who tweets at Ray4Tesla handle, writes “The elusive cheaper compact Model Whatever may come sooner than you think. The prototype is said to have been completed & most component suppliers have been lined up. Trial production has been planned for the end of 2021.” He also says, “I would put some weight on this rumor as it comes from a pretty reliable source (不是郑小康). He brought several leaks to surface before, which later turned out to be true. However, like anything else, past performance is no guarantee of future results. Take it w/ a grain of salt.”

The CEO commented in the announcement:

Tesla will make a compelling $25,000 electric vehicle that is also fully autonomous.

He made it clear that this new price point is achieved through Tesla’s new battery cell and battery manufacturing effort, which could reduce battery costs by over 50%.

At the moment it is still completely unclear in what time frame the new electric car will come onto the market. Last year, however, Tesla cautiously announced that a vehicle developed in the new Tesla center in China would also be sold there as early as 2023. If the rumors about the production test run come true, it could be as early as 2022 that the new model will hit the market.

The Tesla Model 2 should cause a stir in the compact class. The Model 2 will be an absolute price breaker at a price of around 25,000 dollars and thus a perfect vehicle for entry into e-mobility.

Now here are a few more thoughts. One of them says The only $25,000 USD Tesla you'll be able to buy in the near and distance futures will be pre-owned/used.

Tesla are raising prices across the line due to supply chain issues and the raw materials and natural resources needed are not going to get any cheaper over time as all manufacturers ramp up their BEV offerings.

Should Tesla state it's their goal to produce a smaller vehicle? Yes. But they should refrain from mentioning a price. They already went through this with the $35,000 USD Model 3 debacle. Today, the least expensive new Model 3 you can buy in the United States costs $41,190 before taxes.

The other line of thought in the Tesla and EV Community is that if it really is 25K, it will put a nail into the $20K on up LICE, such as Honda's, Toyota, etc. But Not if Tesla doesn't solve the parts, quality, service, etc. problem.
Plus, it depends on what you actually GET for $20K, how durable and reliable it is, etc.

But keep dreaming. I'm rooting for Toyota's solid state battery efforts re more range, less fire and explosion risk, etc. But, from what I have read, you can look for the first prototype models with solid state batteries from Toyota by 2025.

Do you wonder what Tesla will be doing four years from now?