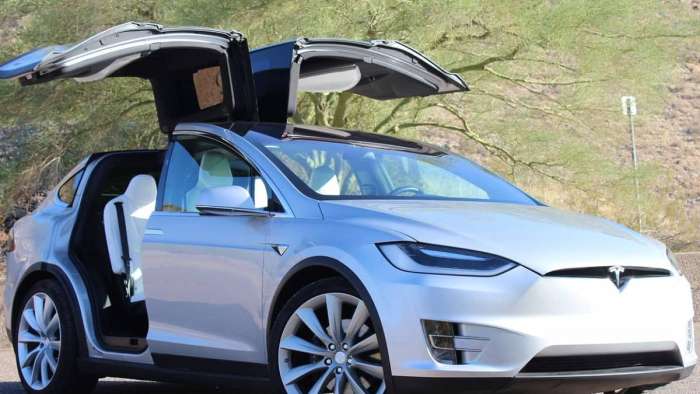 The Tesla Model X is a highly capable family SUV. It is Tesla’s entry point into the very tasteful demand that Americans love: SUV/Crossovers. While some could say that the model 3 is similar to crossover, let’s be honest the Model X is an all out small SUV and is probably more of a crossover than the model 3.
Advertisement

The Most Important Aspects of Tesla Model X

To begin with, let’s talk about the most important aspect that an electric car brings to the table: its efficiency. The Model X when converted to outputs that a gasoline car produces equals out to 99mpg in the city and 93 on the highway. Let’s start off by saying: that’s awesome. My WRX on a great day will max out at 35mpg and it’s a 4 cylinder with boost. I’ve seen it into the 40s but I’ve got to be in sixth gear going 55mph for that to happen. The caveat of the Model X is the range. While it produces very appealing numbers in terms of MPG it does not use gasoline, so it’s comparing apples to oranges.

The “Long Range” version of the Model X starts off at $84,990 and with just a $3,990 bump up from already 80 grand, it seems very likely that a buyer would purchase this spec. The Tesla Model X Long Range has a range of up to 328 miles battery only, which is pretty impressive for what you get and considering how big, heavy, and sluggish this car is. It’s heaviest version weighs in at just shy of 5,600lbs or 2,540 kilos.

The weight of this car is all but limiting, with 518hp and instant torque, this car hardly feels heavy. With that being said, it actually beats out my Subaru WRX with a 10.8lb/hp conversion, which could suggest its faster than my WRX. An electric, family sized SUV/Crossover that’s faster than my track inspired WRX. That is just absurd but not surprising when you look at Tesla’s history.

The Model X levels all the way up to just shy of $140,000 for the P100D model which absolutely absurd. You could buy a Porsche 911 GT3RS and other super cars with that kind of money. The Model X isn’t trying to be a supercar, though it’s supposed to be a top of the line high tech, all electric, reliable family sedan and so far it’s fitting the build.

I am interested to see the longevity of the brand especially as Tesla begins to inch it’s way toward the magic “$6,000” price target that big boy investors have attached to it. I’ve only had TSLA in my portfolio and watch list for 3 years now and I just can’t see that happening, but that doesn’t mean I’m not bullish. Tesla has an unmatched product that needs to be explored from their state of the infotainment system to their state of the art batteries.

At the moment the only competition to the Tesla is Porsche as the public gets their hands on the race inspired slippery Porsche Taycan. Would I buy the Tesla Model X? I wouldn’t buy the P100D, I will tell you that, but I would however consider a Long Range on the used market if the price is right.

Also, please check out my yesterday's story discussing the Model 3 Performance as a beginning of an era in automotive industry. See you in my next story discussing why it's very cheap to manufacture the Tesla Cybertruck.

DeanMcManis wrote on January 17, 2020 - 9:22pm Permalink
Kind of an odd pairing, considering that cost and amazing acceleration are probably the only two similarities between the Model X and GT 500. A closer candidate would be the Audi E-Tron. It's 0-60 time of 5.5 sec is quick, but slower than the base Tesla's 4.4 sec time, it's storage is roomy at 57 cu ft with the rear seats folded, with is better that the Jaguar iPace BEV's storage of 52 cu ft, but it is smallish compared to the Model X's 87 cu ft. Lastly it's EV range of 204 mi falls a little short of the iPace's 234 mi, but well short of the Model X at 328 mi. Now the Model X Performance (at $105K) is not cheap, but you won't find any other SUV that goes 0-60 in 2.7 sec, and runs 11.2 in the 1/4 mile. Except maybe the Lamborghini Urus, priced at $208K. The Model S Performance EV range is lower than the base Model X at 305 mi but that still gives it a 79 MPGe combined rating, which compares well to the Lambo Urus 14MPG, which matches the Shelby GT500's combined EPA mileage rating. Maybe you should have compared the GT500 to the Lamborghini Urus. And soon in the comparative running with be the Model Y Performance at $57K with a 280 mi EV range and getting to 60MPH in 3.5 sec.
John Goreham wrote on January 18, 2020 - 12:28pm Permalink
If the Model X is an SUV, where do the kayaks go? I submit that the Model X is a minivan. It is amazing, but it is a minivan. The least expensive U.S. Model X is presently priced at $84,990 plus the mandatory $1,200 destination fee, totaling $86,190. At least according to Tesla's public pricing configurator page. Have you ever seen a Model X in person for sale new at $81K?
DeanMcManis wrote on January 18, 2020 - 4:54pm Permalink
Kayaks? Seriously? I do not know if I have EVER seen a SUV with a kayak on the roof, and I definitely would not change it's designation from a sports utility vehicle to a minivan because of any roof storage issues. The Model X is easily big enough to fit any normal camping, traveling, hiking gear inside with it's 87cu ft interior space. Every single competing automaker also have tons of options available that bring their prices up from MSRP, and it is very easy for the European models to exceed $100K without even getting to the top performance models. The BMW X7 M50i starts at $100K before options and is almost as quick as the base Model X. Also the Lincoln Navigator and Cadillac Escalade SUVs easily top $100K with mild options, but they are not nearly as quick as the entry level Model X, and they have NO performance models available that begin to approach the Model X Performance's acceleration capabilities which surprisingly rival some supercars.
Jay.D wrote on January 24, 2020 - 5:36pm Permalink
That Tesla is one ugly car. I’ll take a GT500 Shelby SVT Cobra any day over any Tesla. My brother owns a Shelby GT500, awesome car!