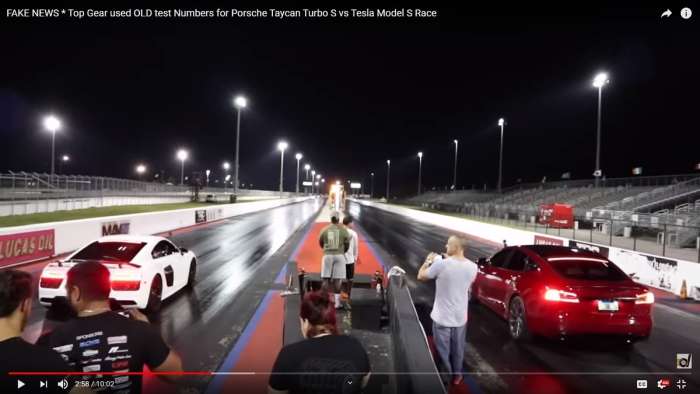 Top Gear (British car show) recently ran a drag race on a dry road between the two quickest/fastest EVs in the world. And in their video the Porsche Taycan Turbo S won over the Tesla Model S Performance. However, there are some notable problems with the video. First, it looks like they were NOT racing against the current Model S Performance (Raven) version, but the previous Model S, and even so the race was very close.
Advertisement

Top Gear's VBox recorded the Porsche Taycan at 0-60: 2.61, 0-100, 6.12, and 1/4 mi [email protected], with the older Tesla P100D managing 0-60 in 2.68, 0-100 in 6.46, and 1/4 mi in [email protected] Now following history Porsche often underrates their cars, and understates the performance. And even though the Porsche's 2nd gear at 60MPH could explain better performance on the top half of the 1/4 mile, the 132MPH trap speed says that the Taycan is making a lot of power. It is quite possible that the $187K Porsche Taycan Turbo S is quicker than a 2016 P100D, and maybe even quicker than the $99K (Raven) Model S Performance. But Top Gear is not doing Porsche any favors publishing inaccurate information.

When I first saw the video I immediately thought that the Tesla acceleration numbers were wrong because so many Model S owners regular ran MUCH faster than Top Gear did. Several owner YouTube drag tests of the new Raven Model S Performance have clocked 0-60 in 2.4, 1/4 mile in 10.5 at 127 MPH both at the dragstrip and on the street. So a race between the most powerful Taycan and newest Model S would put them neck and neck and my bet is that the Tesla would win the 1/4 mile race, but just barely, with the Porsche catching up in the end.

Overall the Top Gear video seemed to be a fair review, so I kept an open mind. But now it comes out that it's probably not the current Model S Performance (Raven), they didn't use launch control on the Tesla, but they did on the Porsche, they used the Top Gear test numbers from a 2016 P100D (also not using Launch Control), and on top of that they played down the fact that the Porsche Taycan Turbo S costs almost TWICE as much as the Tesla Model S Performance.

Plus an analysis of the Top Gear video reveals that the Tesla was in Range Mode, which trades power for longer range, and the video also shows that Launch mode is not enabled because the dash graphics always change in Launch mode.
For me it highlights a big problem with the internet and TV shows is that their primary goal is the get attention and entertain to make money, and the ideas of accuracy and integrity are brushed aside. It seems to be a big gamble to publish video programs that are based on fundamental lies, because one thing that the internet does do is review videos and criticize faults.

Ultimately, Top Gear admitted that the acceleration numbers that Top Gear posted in the video were not even from this Taycan race. They were actually from an earlier race with a 2016 Model S P100D against a Mercedes E63.

But in a later reply article, Top Gear's response was that their test results for the Model S on that day were actually slower, so they used the faster test numbers from the earlier test. They said that the best figures recorded for the Tesla Model S Performance during its races with the Taycan were a 0-60 mph time of 2.83 seconds, a 0-100 mph time of 6.64 seconds, and a quarter-mile time of 11.23 seconds at 123.2 mph. Which raises even more questions, seeing that the racing clips do not show the Taycan with a half second (4 car length) lead at the end of the race.

This whole Top Gear video mess brings back memories of their review of the original Tesla Roadster. Where they showed a scene of two men pushing the disabled Roadster into a garage after it broke while thrashing it on the track. Elon Musk sued TG because it was revealed that Top Gear's shooting script which showed the scenes of the Tesla breaking down, and TG workers pushing the broken Tesla into a garage, and this was written even before they got the car and started filming. So it was all set up to make Tesla look bad, for the sake of entertainment, with little regard for doing an unbiased road/track test. But still a British court dismissed the suit because they said that Top Gear was known by their audiences to do reviews that were designed to be entertaining, but not necessarily factual. But often internet audiences just blindly believe what they see, and take the video on it's face value that it is an honest and accurate comparison test.

Elon Musk made a comment yesterday that Drag Race Times review shows that the numbers were wrong. Either way, Elon Musk said that Tesla was going to do an over the air software update for the Model S that gives it an extra 50HP, so that it easily beats the Taycan Turbo S.
Drag Race Times analysis is correct. Also, there’s a software upgrade for Model S coming out that increases peak power by 50HP, so Model S should beat Porsche Taycan Turbo S by a wider margin in 0 to 60 & 1/4 mile races.

Drag Race Times analysis is correct. Also, there’s a software upgrade for Model S coming out that increases peak power by 50HP, so Model S should beat Porsche Taycan Turbo S by a wider margin in 0 to 60 & 1/4 mile races.

And as a follow up, Drag Race Times recently had a reader with a Raven Model S Performance perform similar tests to Top Gear, even without Launch Control enabled and ran [email protected]

So it's another example of not believing everything that you see on the Internet. Even a slick looking, "professional" video review. But in the end it will be a great plus for Model S Performance buyers, who get an extra 50HP for free, and remotely via an over the air update. When was the last time that you saw a performance car manufacturer add an extra 50HP, for free? The answer is Never.

I can't wait to see a legitimate Taycan "Turbo" S vs. Tesla Model S Performance (Raven + 50HP) race! Unfortunately, an honest race probably won't be coming from Europe any time soon, and Porsche is not handing out Taycan Turbo S press cars for testing in the U.S. yet.

See you in my next story where I am discussing the possible cause of the Honda, Toyota and Hyundai EV delays.

DeanMcManis wrote on November 5, 2019 - 7:54pm Permalink
After the Drag Times (Fake-News-titled) video was posted Top Gear replied and admitted that they had used the older P100D drag race results in this video, but they said that it was because the real test number had the Tesla even slower. But when reviewing the video you could see the Tesla dash and center panel screens showing Range mode on, and not using Launch mode which cuts over 50HP from the Model S, which would explain the slower times. Top Gear responded saying that the Tesla in-car footage was "B-Roll" extra video, which is why it showed not being in Launch mode, etc..But you can clearly see the green Taycan in the real and side mirrors, and if they really did 5 runs how come they wouldn't use any of that video? Especially because it would have shown the 4-car lead that the Taycan would have had if the Tesla got a 11.08 vs 10.68 1/4 mile time.
DeanMcManis wrote on November 10, 2019 - 8:48pm Permalink
So from the badging and dashboard design in the top Gear video it might appear that it was actually a Tesla (Raven) Model S Performance after all (which Brooks from Drag Times never contested) but it still shows up the HUGE gap in performance numbers from TG's "testing" compared to all of the world's current documented Tesla Model S Performance numbers recorded, which are a half second quicker (including many tested on the street). On the positive side, Model S and Model X Performance owners are eagerly awaiting their promised extra 50HP, free, over the air, power upgrade. And in similarly good Tesla performance news, One of the Two "Plaid" Model S prototypes set down back-to-back 7:13 Nürburgring Nordschleife unofficial track record times before heading home last week. Porsche set a new 4-door EV record at the Ring in late August completing the 12.8-mile course in 7 minutes and 42 seconds. Tesla sent a Model S prototype to beat the record, and set a 7:23 time on Sept 17th, obliterating the Taycan Ring time, and they later came back with the same original red car and a blue car which were both tuned for the track. The red car crashed on the (wet) track at speed (nobody got hurt) and the blue Model S "Plaid" later went on to set two 10-second faster lap times when the track was dry. Which is amazing, seeing that the new 7:13 times beat legendary supercars like the Pagani Zonda F Clubsport, Lamborghini Aventador LP 700-4, and Ferrari Enzo, that is an amazing achievement!

Tsingshan's Threat to Tesla: EV Maker Is In Battery Crosshairs
Tesla-Funded Research Reveals One of The Biggest Mysteries of EV Battery
END_OF_DOCUMENT_TOKEN_TO_BE_REPLACED