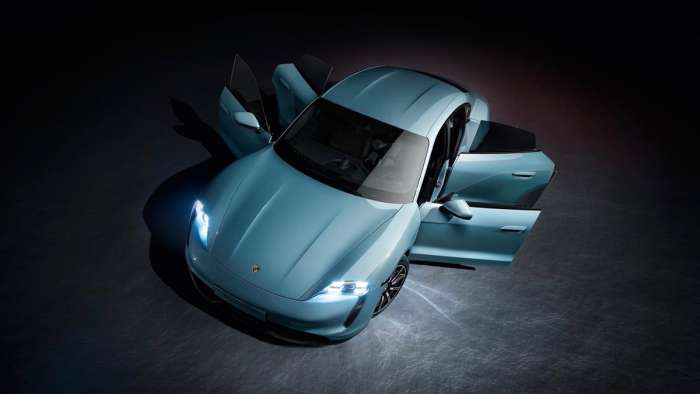 Porsche expands its Taycan model lineup to include the new $105,000 entry model the 4S, with two battery sizes.
Advertisement

A little over a month ago Porsche unveiled its $187K Taycan Turbo S and $153K Taycan Turbo models with much fanfare. Shortly afterwards I released an article comparing Porsche’s first fully electric cars to Tesla’s Model S and Model 3.

In fact, Porsche has decided to make the next generation of its popular Macan fully electric too, which is made in its Leipzig factory, where Torque News editor Armen Hareyan visited yesterday in a trip, organized by Germany Trade & Invest (GTAI) organization.

The Porsche Taycan’s strength is that it offers superior build and materials quality, some new EV design and engineering ideas, and the fact that Porsche has decades of experience building excellent performance/luxury cars. At a price. And that price could easily soar past the $200K mark on the top Taycan Turbo S once you add in a few options. But that top model Taycan still had less power than the top ($99K) Model S Performance, and the Tesla had nearly 100 miles more EV range than the Taycan Turbo S.

Enter in the Taycan 4S

The $105K Taycan 4S is a much closer match in price to the Tesla Model S Performance, but it has a smaller 79.2 kWh battery, with an optional 93.4 kWh battery available (same as the “Turbo” models) for a starting price of $111K with more EV range. Choosing the regular battery pack gives you 429 horsepower and 472 pound-feet of torque, but engaging launch control boosts that power to 522HP. Choosing the bigger battery gives you 482 hp and 479 lb-ft, and using launch control gives you 563HP in boost mode. However both 4S versions apparently still share the same 3.8 second 0-60 time. This still makes the 4S quicker than its more expensive (gas powered) brother, the Porsche Panamera 4S. But the 4S appears to be slower than the entry level ($79K) Tesla Model S, Long Range, which sports a whopping 370 miles of range. And it also looks like it will perform similarly to the ($57K) Model 3 Performance.

But the test was done entirely on a wet racetrack, and they were using last year’s Model S P100D, and not the newer/faster (Raven) Model S Performance, so the results are highly questionable overall. I am very eager to see the Taycan Turbo S take on the current Model S on a dry track to see how they really compare, as well as how the Taycan runs against the Model 3 Performance which has a special Track Mode.

How the Porsche Taycan 4S measures up

The new entry model Taycan 4S does drop its price by nearly $50,000, but unfortunately that still makes it a hair more expensive than the top Model S Performance, with its vastly quicker 2.4 sec 0-60 capability, and far longer battery range. And now the 4S’s acceleration is about the same as the $79K, entry Model S, and potentially slower than the $57K Model 3 Performance. Plus you get smaller, 19” wheels standard on the Taycan 4S. But on the plus side, you still get the Porsche design, brand, and great build quality for the price difference. 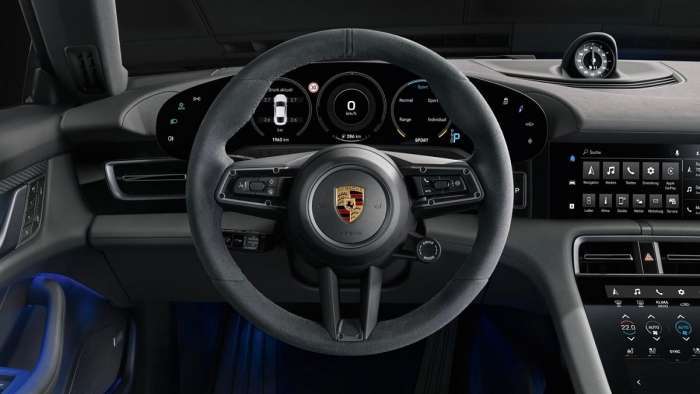 In my mind it was smart that Porsche did not release this Taycan 4S entry model at the car’s introduction, because with the top Taycan Turbo S model at least it competes closely in performance to the top Model S. So then you just have to justify to yourself the 2X price difference. Which loyal Porsche buyers will do in a heartbeat.

For me this new Taycan 4S has a much harder job competing against the Tesla Model S Performance, being much slower and having far less range. And the entry level Taycan highlights that fact that the Model 3 Performance looks like such a superior value at $57K, being almost half the price of the 4S, but offering more performance, handling, and range (310 mi). But on the other hand the Model 3 certainly doesn’t have the Porsche Taycan’s status or image.

How well do you think that they compare in terms of performance value?

Please, also read my latest story about the full Tesla vs Porsche Taycan race and controversy.

DeanMcManis wrote on October 30, 2019 - 8:19pm Permalink
As a follow up on that first German TV show's comparison, racing the Taycan Turbo S against the previous Tesla Model S P100D on a wet track, Top Gear (British car show) just ran a drag race on a dry road and again the top Taycan Turbo S won. But again they were NOT racing against the current Model S Performance (Raven) version, but the previous Model S, and even so the race was VERY close. Top Gear's VBox recorded the Taycan at 0-60: 2.61, 0-100, 6.12, and 1/4 mi [email protected], with the older Tesla P100D managing 0-60 in 2.68, 0-100 in 6.46, and 1/4 mi in [email protected] Now following history Porsche often underrates their cars, and understates the performance. And even though the Porsche's 2nd gear at 60MPH could explain better performance on the top half of the 1/4 mile, the 132MPH trap speed says that the Taycan is making a LOT of power. Still, local drag tests of the new Raven Model S Performance have clocked 0-60 in 2.3, 1/4 mile in [email protected] So a race between the most powerful Taycan and newest Model S would put them neck and neck and my bet is that the Tesla would win the 1/4 mile race, but just barely, with the Porsche catching up in the end.But Top Gear compared all facets of both cars, and barely mentioned that the Porsche Taycan Turbo S costs nearly double what the Model S Performance does. Hmmm.
DeanMcManis wrote on October 31, 2019 - 3:21am Permalink
What has come out after this Top Gear video was released is that the acceleration numbers that Top Gear posted were not even from this Taycan race. They were from an earlier race with a 2016 Model S P100D against a Mercedes E63. www DOT topgear DOT com/car-news/top-gear-drag-races/tesla-model-s-and-merc-amg-e63-vs-stopwatch * Model S P100DL * 0-60: 2.68 * 0-100: 6.46 * 1/4 mile: 11.08 @ 124.0 + "155mph max speed" is for 2016 P100D where 2019 Raven is 162mph... So you can view it as either Lying, Shabby Journalism, Biased Entertainment or all three. Again it is quite possible that the $187K Porsche Taycan Turbo S is quicker than a 2016 P100D, and maybe even quicker than the $99K (Raven) Model S Performance, but Top Gear is not doing Porsche any favors publishing inaccurate information.

Tsingshan's Threat to Tesla: EV Maker Is In Battery Crosshairs
Tesla-Funded Research Reveals One of The Biggest Mysteries of EV Battery
END_OF_DOCUMENT_TOKEN_TO_BE_REPLACED