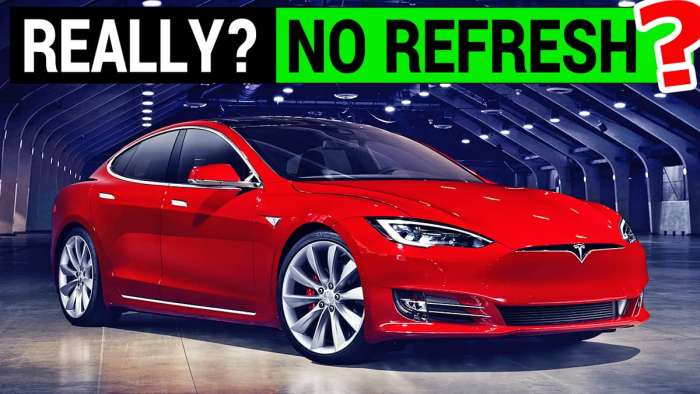 So, about that Tesla Model S and Model X refresh. Electrek first reported on it back in July of 2018, and we have been teased here and there with additional details from purportedly sound sources. Supposedly we were to look forward to an updated interior, upgraded batteries, and some other exciting changes. AJ McGinnis reports.
Advertisement

It looks like some (if not all) of those hopes may have been dashed by a single tweet.

On Monday night, Tesla CEO Elon Musk responded to a tweet on the popular social media platform Twitter with the discouraging news.

There is no “refreshed” Model X or Model S coming, only a series of minor ongoing changes. Most significant change in past few years was to use high efficiency Model 3 rear drive unit as S/X front drive unit. That went into production 3 months ago.

He clearly stated that Tesla is planning “a series of minor ongoing changes” for its older Model S and Model X vehicles, but not a major refresh.

This is in stark contrast to what has been previously reported, even up to and including talk of updating Tesla's Fremont factory to allow for such a refresh.

All A Matter of Wording?

Musk has made it abundantly clear time and time again that he does not like using the word 'refresh' in regards to Tesla vehicles. This may be at least partially because the vehicles are continuously updated via over-the-air software upgrades and occasional hardware improvements. Maybe Musk wants to continue to differentiate his company from other legacy automobile manufacturers, and this is just another area where he does not want to be compared to their practices.

Also watch our video analysis of Elon's announcement that there will be no Model S and X refresh and click to subscribe to Torque News Youtube channel for daily Tesla and Automotive news.

Certain Model S owners would argue that the vehicles had already received a refresh with the redesign of its front fascia several years ago. Also, some owners of the newest Model S and X Raven vehicles claim that their cars feel completely different from the original releases. Musk just refuses to call such exterior design changes a 'refresh'.

While an actual Model S 'refresh' may not be in the works, that "series of minor ongoing changes" may still bear fruit. Incremental changes are still changes.

We will likely see the Model S and Model X released with bigger, lighter battery packs with more power and a better range in the near future. Cars with these newer batteries would likely be able to use the Supercharger V3 Network, meaning that they could charge at 250 kW. We might expect to see an EPA range rating of about 400 miles per charge for both vehicles, too.

Newer Model S and Model X may also come out with a new tri-motor design, with two large rear motors and a smaller one in front. This means more power and better performance, though it is more complex than the previous design.

DeanMcManis wrote on July 9, 2019 - 10:59pm Permalink
This is another example of internet buzz feeding on itself. With rampant stories of a complete and dramatic Model S redesign, being accompanied by new batteries and technology that brings the Model S well past it's competitors. The truth is that even if there were such changes coming, the knowledge of the new models would virtually kill off current sales of model S and X vehicles. I had seen a general buzz of people holding off on a new Model S purchase because of the rumored big changes due later this year. So even though this news pretty much confirms that no dramatic changes are coming (outside of the latest range, performance, and suspension improvements of the new "Raven" versions of Model S and X) there could be further increases in range and performance due this year. It is just speculation (like everything else on the internet) but I suspect that the Model S and X were originally planned to be upgraded later this year with the Model 3's newer/denser batteries, but I believe that Tesla's recent acquisition of Maxwell Technologies may mean that Tesla can now leapfrog the Model 3 battery upgrade and jump directly to Maxwell's new dry electrode lithium battery design, perhaps even with a ultra capacitor hybrid battery pack that would dramatically lower battery pack/vehicle production cost, improve energy density, performance, range, and reliability which would put them ahead of their competitors for years to come. But building all new batteries involves massive R&D and testing, and retrofitting of their factories (including their current in-house Panasonic battery production at the factory) And it is very doubtful that this huge task can be accomplished in a few month's time. Tesla is clearly gearing up for it's Model Y production, and (like the Model 3 before it) Tesla has a LOT riding on the new vehicle's sales. So they cannot let rumors get ahead of near-term sales and profits.
Steve Birkett wrote on July 22, 2019 - 8:48am Permalink
I agree with Dean... don't care about major X/S changes, just get that Model Y in production as soon as possible and enter another mass production segment!