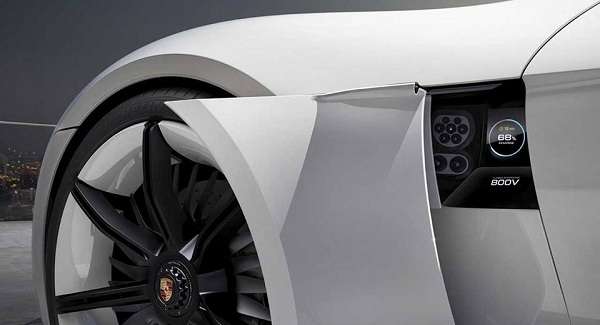 There is a new challenge in the electric car word and it is Tesla Model S vs Porsche Mission E. While the media is reporting promising competition from Porsche the initial production of the Mission E is expected sometimes in 2019. Where will be Tesla by then?
Advertisement

Apparently Porsche has been following Tesla very carefully. They are targeting Tesla as a measuring point and hope the Mission E will do better. Porsche is particularly targeting Tesla's Ludicrous mode. A Porsche engineer, not directly working on Mission E, tells Automobile Magazine that "the thing about [Tesla’s] Ludicrous mode is that it’s a façade. Two launches saps the whole battery. That won’t be the case with the Mission E. You’ll be able to run it hard, over and over; the battery will not overheat, the power control module will not overheat, and the seats will not suck."

As I read in the forums Tesla owners and enthusiasts don't care about the Ludicrous mode very much. "I don't care about Ludicrous mode. It's no better than Ford having the ability to open the rear hatch with waving the foot under the car. It's a silly feature. Range and performance/handling in normal everyday driving are much more important, to me, at least," writes Dave Altman in Electric Cars public group on Facebook.

Let Porsche Build it First
Before competing vs Tesla Model S or Model 3 Porsche has to first built its Mission E concept into production car. Then there is the matter of the charging infrastructure. Porsche should bring it on because there is room for more than one quality player in the electric car market.

I have been readings few forum discussions where Tesla owners are discussing Model S vs Porsche Mission E and the overarching theme is that most people say they want to see the price of the Mission E, the range, the seats and what else it can offer so they can make a fair comparison between the two electric cars.

Porsche Vs Tesla Model S: Wrong Comparison
Frankly I was surprised to see Porsche taking the Tesla Model S as it's target when comparing it vs Mission E. Here is why. I think Porsche is missing the point about the Model S because the Model S is a family Sedan not an electric sports car. Can or will Porsche produce a family sedan that can compete with Tesla? When you look at Mission E pictures and the video it doesn't look like a family sedan. I am all for the competition, but I don't think Tesla will be sitting still for three years until the Porsche Mission E's anticipated production date.

Porsche Can Do It, But It Takes More Than A Press Release
Having written about Tesla's advantages vs Porsche Mission E, we have to also admit that Porsche can make a great car. It can make a great electric car because it's a well established car company and has billions to spend. Also, Porsche's attention to engineering detail is excellent. But getting from an electric concept to a full production Mission E needs more than a press release, and the laws of physics and chemistry need to be handled along the way. I am really glad Porsche is entering the electric car manufacturing sphere with strong aspirations. Porsche's innovation will help our planet a lot. As long as people watch racing, it's better to at least be able to use electric cars for racing that have endurance and the necessary acceleration.

Porsche's goal is a good goal. With its Mission E concept it targets Tesla where the latter has its weakness. Porsche wants to outdo Tesla where it can. That's what competition is all about.

In the first paragraph of this story I wrote that the target production date of the Mission E is somewhere in 2019 and asked where will Tesla be by then? Perhaps Tesla will be on a 2nd generation Model S by the time Mission E is released. I am sure Tesla is watching Porsche too. Overall, the coming of new electric cars in the market is a welcome news for consumers and the environment.

Belz wrote on July 9, 2016 - 10:14am Permalink
The front of this e-mission concept has high air resistance around is lights, not good for highway range. The promised launching advantage is lame - who sets out to launch its car frequently in a short time period? Anyway, the model s would leave this concept car in the dust. This concept is only a four seater and its height is waist high - quite a compromised design. And range will further be limited by its over size wheels. I don't think I ever seen engineers and a self respecting car company having to boast how they will introduce a car several years from now to compete with a car that is available today. This is not very inspiring.
Terry V wrote on November 4, 2017 - 9:55am Permalink
All due respect, Tesla has always introduced cars years before their respective availability. I think Porsche’s early announcement is great for creating general excitement around electric cars, around sports cars, and also great for putting Tesla (and all car manufacturers) on notice in a fun and public manner.

For Some Former Daimler Managers Daimler Is Authority, While Tesla Is Like a Startup
How Daimler Unintentionally Subsidizes Tesla Giga Berlin
END_OF_DOCUMENT_TOKEN_TO_BE_REPLACED