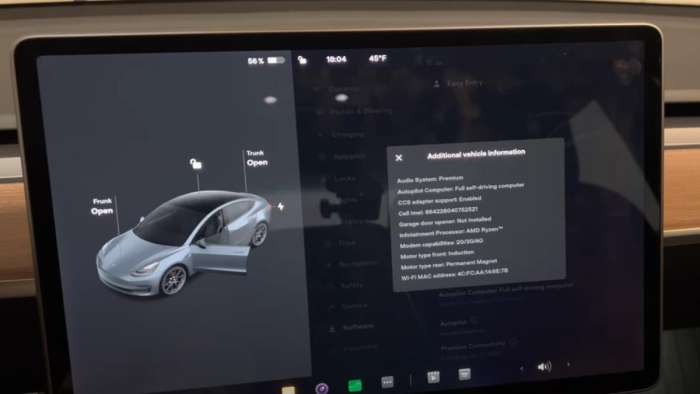 Tesla Owner Gets a Text That His Vehicle Range Has Increased

We just saw a Tweet from a user that was sent a text from Tesla that the range of his vehicle as increased. Why did this occur? We'll go over that now.
Advertisement

Tesla Owner Gets a Message That his Vehicle Range has Increased

Whenever Tesla sends a message to an owner about something, it usually gets a lot of attention. A little while back, we wrote about a Tesla user getting a text from Tesla about their Cybertruck and getting energy setup in their home. That got a lot of attention. So now that Tesla is messaging people that their range is increasing, I think it's worth taking note of.

Let's take a look at what the message said:

A Twitter user was told by Tesla that his Model Y on order got upgraded to 565 km of range. That's about 351 miles of range, putting it ahead of the Model Y in the U.S. by over 20 miles. That's pretty impressive! The Twitter user even upgraded to get FSD because he was so happy with the range increase.

Why Was the Range Increased?

There is speculation from a Twitter user, Phil, that says Europeans will continue to get Model Y LRs from Giga Shanghai. This is because Giga Berlin is not yet ready to produce vehicles.

Tesla seems to have switched to Ryzen and Lithium batteries recently. All the Model Y Performance vehicles will come from Berlin. This was confirmed from Tesla today. I think the range upgrade is from the change to Lithium batteries from Giga Shanghai, but the real reason could be someone at Tesla found a way to make the cars more efficient.

The range increase isn't from the 4680 battery cells because those are going to come from Fremont and Giga Texas to start with. Eventually, Giga Berlin and Giga Shanghai will have battery factories that can produce them, but it won't be for a year or more most likely.

The Twitter user, who got the text From Tesla, was also notified that the AMD Ryzen MCU was also bundled with the vehicle with the range increase. AMD is a chip processor maker, like NVidia, and the MCU is for the infotainment computer, replacing the current Intel Atom A3950 chips in prior models.

So not only is there a range increase from the battery, there is an upgrade in the infotainment system. And all of this is done behind the scenes as Tesla is continually updating and upgrading their vehicles. Tesla truly moves faster than any other company on earth.

What I know is that Europeans will continue to get Model Y LRs from Shanghai. They've switched to Ryzen and Li batteries recently. All the MY Ps will come from Berlin. Confirmed from Tesla today.
4680s will only come from Austin, until CN and DE battery factories are finalized.

Will more Tesla owners get messages that their range has increased? How much further will Tesla ranges go? Is the AMD MCU going to be upgraded to an even better chip this year or next?

Roger wrote on January 20, 2022 - 2:26pm Permalink
Dude, need some educatin'. All of them have Lithium batteries, that is the foundation of every single EV out there in the world. The more recent move is from the Nickel-Cobalt-Aluminum (NCA) formulation of the Lithium battery to the Lithium Ferro-Phosphate (LFP) for some vehicles. Lower energy density but cheaper and lower fire risk, other advantages.
Michaeldot wrote on January 21, 2022 - 12:09pm Permalink
It was a comment on the size of the cell. Not the chemistry.
Dink Singer wrote on January 21, 2022 - 9:08am Permalink
So far all of the Model Ys delivered in Europe have been manufactured at Giga Shanghai. The batteries, which are built by Tesla, contain Tesla designed 2170 cells manufactured by LG Energy Solutions in China. Very soon Tesla will begin to manufacture Model Ys at Giga Brandenburg but, because of the glitch in manufacturing 4680 cells, the batteries will still contain LG 2170 cells shipped from China. While "The range increase isn't from the 4680 battery cells" it is not "because those are going to come from Fremont and Giga Texas to start with. Eventually, Giga Berlin and Giga Shanghai will have battery factories that can produce them, but it won't be for a year or more most likely." There is a pilot plant producing 4680 cells on Kato Road in Fremont but at full scale production 4680 cells for vehicles built there will be manufactured by Panasonic at Giga Nevada where Tesla will build structural batteries containing them. Giga Brandenburg, as well as Giga Texas, was supposed to be producing 4680 cells by now and the equipment to do so is already in place but there was a glitch that as far as we know has not yet been fixed so Tesla switched to the backup plan where the two new plants will initially build non-structural batteries containing 2170 cells manufactured by LG in China for Brandenburg and Panasonic in Nevada for Texas. When this was announced on the Q2 2021 earnings call Elon Musk said "I mean, my guess is, more likely than not, above 50% of reaching a hundred gigawatt hours a year [of 4680 cell manufacture by Tesla itself at the two new plants] by the end of next year on annualized rate. Something like that." To put that in perspective, Panasonic production of 2170 cells at Giga Nevada in 2021 was less than 40 gigawatt hours. My guess is that the range improvement is due to software changes.
Sher l sherpa wrote on January 21, 2022 - 11:18am Permalink
Hello have tesla model y standard range only 204 miles now how do I get increase mileage please let me know thanks
Garry Stiegman wrote on February 11, 2022 - 4:04pm Permalink
I did not receive an email for my existing 2021 MYLR, but noticed my estimated range increased from 114 to 124 miles after SW update 2022.4.5 yesterday.