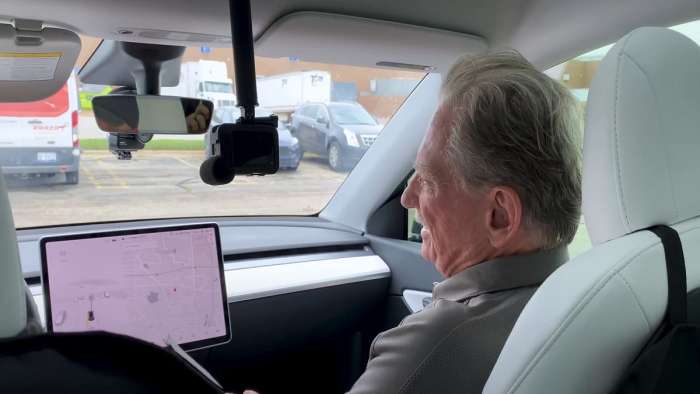 Sandy Munro, a leading automotive expert, took a ride in a Tesla to see Tesla FSD Beta v9 in action. Let's see what he had to say during the drive with Chris from Dirty Tesla.
Advertisement

Let's give a play by play of Sandy Munro and his drive in a Tesla Model S with Chris, from the YouTube channel, Dirty Tesla:

After talking quite a bit, the Tesla finally leaves a parking lot onto city streets and makes a left turn once a stoplight turns green.

Sandy Munro: "Going around a corner, no touchy, all green and no grass."

Chris: "The Tesla FSD software is very good at making turns at green lights when there is no traffic around and the turn is protected. When there is an unprotected left turn with traffic coming, the car isn't as confident."

There was then a left turn at about 120 degrees.

Sandy Munro: "I haven't seen a Tesla car make a turn like this."

The light turned green. Chris gave the Tesla a little tap on the accelerator and the car did the turn with no problem. The Tesla then went into the slow lane.

Sandy Munro: "Left turns were a big deal for everybody, but most people have them under control. I don't like that the car wants to go into the slow lane. It took me a while to get rid of the feature for my Model 3 of going into the slow lane."

Chris: "Well, the Beta is very good at following the rules"

I have to agree with Chris on this one. I want the Tesla FSD Beta software to be a stickler for the rules and drive defensively.

So far, the Tesla has driven with minimal intervention, except a slight accelerator tap.

Chris: "The version of this Beta is very good at turns at creeping forward and giving itself more vision in order to make the turn."

Sandy Munro: "Excellent. What about using the car to pick you up?"

Chris: "I haven't used it too much, it's a little slow. especially in busy areas. I use the full self-driving 98% of the time for regular driving."

Sandy Munro: "The software is picking up the traffic cones, but it does not pick up on the stanchion. I liked that Fleer did pick up on those."

A stanchion is a pole. I have to agree with Sandy on this one. The Tesla FSD driving software does not yet pick out all objects, poles, or pillars. But this will hopefully be fixed in future versions.

Chris: "The car stopped for some deer, but they weren't displayed on the screen. I asked Elon Musk about this and Elon said that the eventual goal was to display reality exactly as it is."

I assume this means that deer, poles, pillars, and all objects will eventually be rendered at some detail. The car then went down a side road in a less busy area. The car went through a 4-way stop successfully, letting another car go first on the right.

Sandy Munro: "I drive with one foot and rarely hit the break when driving."

So far, Chris has done a drive with just a slight tap of the accelerator.

Sandy Munro: "Let's do the other thing I'm interested in. Home. I thought there was a return to previous location function."

Chris: "There's no function for that."

Sandy Munro: "Can you use the microphone to navigate?"

Chris: "Just click this button and issue your voice command."

The car then input a destination, but it was wrong. Sandy then gave more detail and included Auburn Hills, MI in the address and the car began driving to that destination.

The car went through another 4 way stop without issue.

Sandy Munro: "It's mapping the route. Here is a street that is quite big."

The car then makes another right turn without issue. The car is moving at a 10% rate over the normal speed limit. Chris and Sandy talk about the speed limit option.

Sandy Munro: "The real killer is when you start getting into sub-divisions. It doesn't like using autopilot in neighborhoods. The real trick is driving in cramped quarters. Have you experienced any shocking scenarios?"

Chris: "The car has required intervention, but nothing too shocking. You just have to keep your hand on the steering wheel and be prepared for the car doing things it's not supposed to. But I've never been scared."

The car continues to drive through city streets with no problem.

The car drove the entire way without intervention. Traffic was sparse, but there were multiple 4 way stops and several left hand turns, along with right turns on the freeway where autopilot engaged. Tesla FSD performs great when the situations are simple like this. Situations that are dense and complicated are where the Tesla FSD still needs some work.

What do you think about this drive with Chris from Dirty Tesla and Sandy Munro? It looked like a pleasant and pretty straightforward drive.

Al D wrote on July 20, 2021 - 8:03am Permalink
It works fairly well until it screws up. Perhaps the back seat is the best place to be when it does screw up. Until a computer can handle every complex situation imaginable on the road better than I can, I'll continue to trust my deteriorating vision and rotting brain.