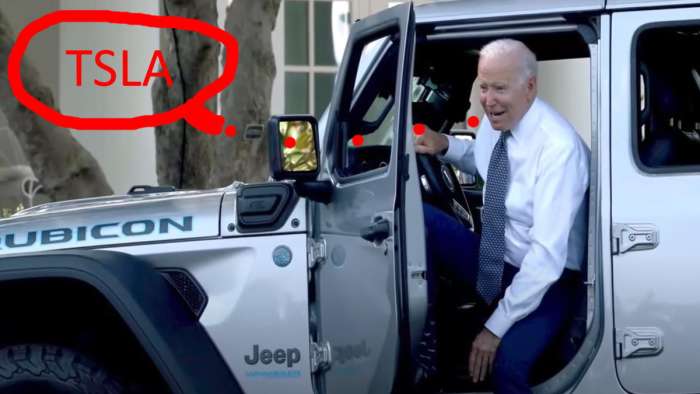 Biden Administration Ready to Talk to Tesla About Chip Shortage

We have word, anonymously from some, and specifically from others, from those inside the White House, that they are ready to talk about the chip shortage and enlist the aid of Elon Musk to help combat supply chain challenges. Will President Biden finally be able to acknowledge Tesla?
Advertisement

Biden Administration Ready to Talk to Tesla About Chip Shortage

According to Bloomberg reports, Joe Biden's Secretary of Commerce, Gina Raimondo says she is ready to consult Elon Musk on how to better handle the chip and supply chain shortages that are plaguing the auto industry. This may come as a surprise to many who see no mention of Elon Musk from Joe Biden or any of his constituents.

There are certainly tensions over President Biden and his administration publicly ignoring Tesla and Elon Musk and avoiding mentioning anything about Tesla's leadership or progress in EVs. There's been very clear and concise Tweets from Elon Musk on Twitter directly to President Biden. The most famous being:

When you look at the numbers, Tesla is clearly the leader in EVs - this is reality and the truth. When you hear public statements from President Biden and CEO of GM, Mary Barra, talking about how GM is leading the EV revolution, it just isn't so. It doesn't mean GM can't produce EVs and succeed at it. It just means they aren't leading right now and the numbers show it. GM produced 26 EVs in Q4, 2021.

Will the President and His Administration Acknowledge Tesla?

Tesla is the top selling EV brand in the US and around the world. Tesla is an American company and its cars are all made right here in the United States. Nothing can be more American than doing that.

Those in the Biden administration are looking to consult Elon Musk and Tesla and they should. The entire world continues to face supply chain challenges and a shortage of components. The most important component is semiconductors. Without an abundance of those, there will be struggles to match the production needed to keep up with EV demand.

Tesla has found a way to navigate the chip and supply chain shortages - that knowledge would be incredibly helpful to all companies trying to make EVs to sell. Tesla has shown innovation and leadership in being able to continue to ramp production above 50% even with the supply chain challenges. Ignoring Tesla is akin to ignoring a fountain of youth that you could drink from and revitalize yourself.

There was a very recent interview with Sara Eisen and Brian Deesenec with CNBC and Sara repeatedly asked about Elon Musk and Tesla and why the White House couldn't mention Tesla and their leadership. The response was always a deflection and focused on the UAW (United Auto Workers) association and GM, Ford, and those companies who have unions and supporting those people.

I'm not sure President Biden will every acknowledge Tesla - not until it's too late anyway. But perhaps a future U.S. President will.

I expect as time goes on, that companies like GM and Ford are going to need help, even if they don't think it right now. They have huge gas car businesses and transitioning away from those isn't going to be easy.

Tesla Contemplates A New Strategy for China Retail even As Sales Boom
Jay Leno on Elon Musk & EVs: “I Think He Should Get ... Credit"
END_OF_DOCUMENT_TOKEN_TO_BE_REPLACED