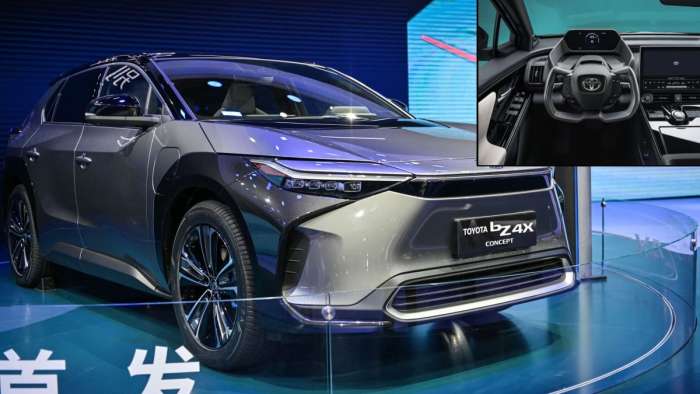 In A World Prototypes, Is A Concept Enough? Is Toyota's bZ4X Its Future?

Toyota, like any car maker, is subject to the whims of the market as much as any other manufacturer. While Toyota’s president Aiko Toyoda seems to be pushing more for his pet project, Gazoo Racing to guide the company forward, the bZ4X has been revealed as a concept. Not a prototype, like the Cybertruck, or F-150 Lightning. Is it too little, too late?
Advertisement

The market seems to be shifting inexorably towards electric vehicles. The on-demand torque and low cost of maintenance of electric vehicles make them a desirable prospect and once we can get the silicon chip shortage and battery chemistry fine-tuned, we should be able to crank out a lot of electric vehicles fairly quickly. As Tesla gets its Giga facilities open, new vehicles will be able to be shipped out en masse to happy new owners. Ford’s Bronco has resumed production and deliveries are starting to be made with that happy little goat.

While the Bronco and Bronco Sport are out and running about, and the Mustang Mach E finds its way into new driveways, Ford is experiencing growth, as can be expected. Toyota’s stock doesn’t seem to have quite as many ‘institutional’ or professionally managed investors as does Ford’s, according to MarketBeat.com. This would seem to imply that these professional investors feel that Ford may be a safer investment, but I wouldn’t presume to offer any sort of financial advice. This implication would also seem to show that maybe Toyota’s lack of a market-ready BEV is harming their growth.

The RAV4 Prime is a plug-in hybrid Toyota. It’s a wonderful vehicle that offers the fastest stock RAV4 Experience while also granting an astonishing battery-only range of over 40 miles, almost 20 more than that of the Ford Fusion Energi plug-in hybrid. While the Fusion Energi is a nice enough vehicle, the RAV4 is honestly more enjoyable to drive, even in its fairly slow ICE version (the XLE that I got to drive takes nearly 9 seconds to hit 60 mph). I find it interesting to note that in California, a BEV version of the RAV4 was available in two different generations; the first from ’97-’03 and the second from 2012 to 2014.

While neither of the two generations of California-only BEV RAV4 were particularly spectacular, they represent a pioneering step towards electrification for Toyota. In 2014, the second generation of RAV4 EV was discontinued. A full seven years later, and Toyota has yet to offer another fully electric vehicle in its place. Yes, the Prius Prime and RAV4 Prime are both capable plug-in hybrids with enough range for most city-dwellers to manage day-to-day driving without ever needing gas, but they aren’t the full electric rides that owners seem to be looking for today.

Enter the bZ4X, another crossover/smaller SUV; this time, fully electrified. It shares a lot in common with the Subaru Solterra, and honestly looks like it could be a great family vehicle. Toyota gave us our sneak peak at the bZ4X concept at the beginning of the month and while many people have implied that it may be a case of “too little, too late”, I feel that we’re honestly just seeing the tip of Toyota’s planned EV Iceberg. They rocked the world two decades ago, when they released the Prius and I honestly think that the ‘concept’ that they showed us of the bZ4X seems just as polished as any of the ‘Prototypes’ that we’ve seen from other companies, like the Cybertruck from Tesla, or the F-150 Lightning’s infamous reveal with President Biden.

The biggest flaw I see with the bZ4X, besides its late entry to the game and that what we were shown was labeled as a “concept” rather than “prototype”, is that the handsome little cross-over that manages to have the same back-seat leg room as a larger D Segment model is equipped with a yoke style steering wheel. While this type of wheel is common in airplanes and even Formula 1 racecars, those applications typically require fewer total rotations than a road-worthy car. When the Tesla Model S Plaid (with its yoke set-up) was taken out onto a track, a pro driver requested the Yoke be replaced with a more traditional steering wheel and I could see people taking the same issue with Toyota’s yoke control. If Toyota’s so called drive-by-wire system is tuned correctly, it seems that you won’t need to move your hands off of the wheel, implying that a 90 degree turn of the steering yolk may manage to move the wheels to their full turn range.

That’s me holding the yoke after Randy told them to remove it after three laps. pic.twitter.com/aMLSHpM3bX

Is this ‘concept’ enough to bring a real Toyota showing in the BEV market, or will ICE vehicles continue to provide Toyota’s bread-and-butter? That part remains to be seen, but I have high hopes for Toyota. Their vehicles, while not my favorite, are excellently wrought and, when they do put out more BEVs, I am sure that those BEVs will be amazingly reliable. Some of the first BEV RAV4s are noted for driving 150,000 miles on their original batteries, though these were crude (by today’s standards) NiMH batteries.

Frank DiMuccio has been interested in the automotive industry since his childhood. In high school, he spent his free-time rebuilding his car and earned a newfound enjoyment of the grease and sweat of working in the garage. He can be followed on Twitter at @Fdimuccio4 for daily automotive news