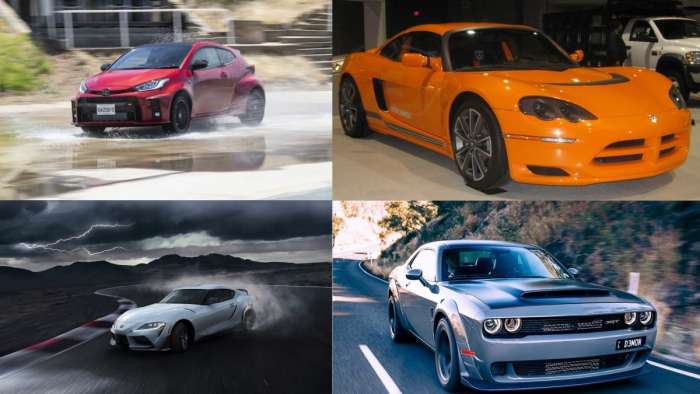 When Toyota brought out the Prius two decades ago, the small, efficient vehicle carved out a niche and a cult following for itself. The RAV4 Prime has earned respect in its own right as well with the plucky hybrid cross-over being a very quick grocery getter. For a company that was so early to adopt electric technology, they seem hesitant to swap over fully. Even Dodge seems more excited to make the swap.
Advertisement

The current president of Toyota, Aiko Toyoda, has begun to guide the company into a more motor-sport friendly direction. Toyota was once famed for not only their reliability, but also for their racing performance. In recent years, Toyota’s race-ready options were slim-pickings. The Toyota 86 or Subaru BRZ is a capable little car powered by a Subaru Boxer engine with power going only to the rear wheels. It’s small and with me being 6 foot 5 inches (nearly 2 meters) tall, it’s too small. For the 2021 model year, Toyota has brought a rally-inspired Yaris to some markets. While the Toyota Racing Development (TRD) name may not be going anywhere, Gazoo Razing (GR), another racing arm of Toyota, has started planning a few vehicles to ship over to America. The GR86 (the updated 86), and GR Supra A91-CF both promise to bring motorsport design to the streets (and tracks) in short order.

Toyota took some flak for getting many of the parts for the new Supra from German manufacturer BMW, but the Gazoo Racing version takes the Bavarian drivetrain to the next level, adding nearly 50 horsepower for the Carbon-fiber festooned Coupe. This nimble, RWD machine will be capable of some excellent performances even if it doesn’t come with a manual transmission.

While Toyota has started to show us teasers for a few different concept EVs, even one from their sister company, Subaru, they’re definitely taking their sweet time actually bringing a purely electric vehicle to market and they don’t seem to even be considering the possibility of an electric motorsports division, though that of course is simply speculation on my part as there’s not been any whisperings about a Toyota or Lexus branded ‘Model S Plaid killer’ that I’ve managed to catch wind of.

Dodge, on the other hand seems to be very aware of the performance capability of electric vehicles and is planning to make full use of it in an electric muscle car. Dodge’s first foray into EVs, the Circuit was in 2009, but never became a reality. So far details about a new electric program are few and far between. We don’t even know if it’ll be a coupe or sedan, just that it should out-perform the Challenger SRT Demon. I’m excited to see what the vehicle ends up being. I hope that it’ll even be able to beat the Hellephant powered Ghoul that seems to be Dodge’s ICE last hurrah of sorts. A reminder, the Hellephant is a 426-cubic-inch motor, just like the engine that was too powerful for Nascar, but unlike the original 426 Hemi, the Hellephant comes straight from the factory with a 3-liter supercharger bolted on. I’d say that’s one hell of a good-bye for the ICE Mopar muscle car.

While Dodge has been even more hush-hush with their full electrification plans, I really like the Stellantis Group’s first American offering, the Jeep Wrangler 4xe. I’m an even bigger supporter of the Magneto concept vehicle. An electric motor hooked up to a manual transmission is not necessary, but like I said about the Mustang Lithium from Ford and Webasto, sign me up. I think that a three pedal set up for an electric car would be a blast. Without a clutch, the Porsche Taycan is capable of doing some really impressive drifts, but a clutch makes drifts so much easier to initiate.

Not everyone wants to drift. My husband gets antsy when I bark the tires a little, and I had a coworker that was terrified to push a Hyundai Accent past 2500 rpm. Driving fast isn’t for everyone. I think that Toyota has an interesting business plan here, though. They’ve estimated that only 15% of their sales in 2030 will be fully electric. The people who seem to be most resistant to electric vehicles seem to fall into a few categories, but the most common one that I deal with are gearheads like myself. Folks that are into working on their car at home because it can bring a sense of calm in the right situation. That mostly goes away with electric cars. These self-same people seem to be frequently entranced with performance vehicles. I think that Toyota may be able to bring in some new customers as other brands completely phase out gas cars, because they’re going to be appealing to those EV-resistant people and if they keep a gas-powered racing division, that attraction will be doubled.

I love electric vehicles. I really don’t mind that they’re taking over the market. I don’t have range anxiety because I believe that the charging network will be robust enough to sustain even shorter-range vehicles taking long trips soon. I would prefer that electric cars come with a gas or alcohol powered range-extender just as an emergency option, but that’s the pragmatist in me. Ford is coming in really strong with an electric line-up and both Dodge and Toyota will have to hustle to keep up with Ford, Porshe, or Tesla in the swiftly evolving EV market.