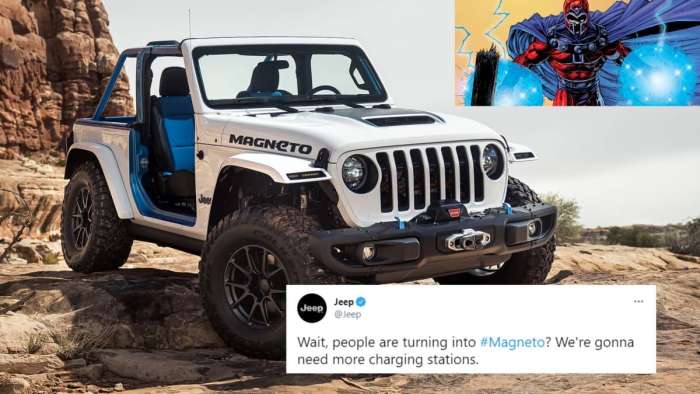 A few months ago, Jeep provided us with the Magneto concept vehicle, a fully electric, 2-door Wrangler. Today, Jeep brought the Magneto back in a witty response to the trending #Magneto on Twitter. Lets take a look at this spectacular off-roader and what could be coming to a trail near you!
Advertisement

#Magneto began trending on Twitter today, not because of Disney’s Marvel’s X-Men, but rather because a certain individual made claims in front of the Ohio House Health Committee that the Covid-19 Vaccine would cause recipients to become magnetic and attract items like forks and keys. With nearly 40% of the American population having already received the full vaccination, it would be impossible to silence reports of side effects with the severity described in the tirade. She also made the claim that the vaccine is related to 5G, which is just absurd. 5G is a Cellular transmission protocol, and not even the most recent, or fastest one.

It is unfortunate that she has been convinced by videos and pictures that were clearly made in jest; please note that most keys are made of brass, a non-magnetic . The fearmongering that has been used to make people terrified of 5G is similar to the tactics used by oil companies to keep electric vehicles and alternative fuel vehicles from taking off.

It is the unfortunate fate of any new technology that it will be feared and scoffed at. When humanity first began writing instead of simply using oratory tradition, naysayers made the claim that humanity would only grow more stupid because they didn’t have to remember facts anymore. Folks also said that computers would never take over for typewriters, that DVD would never replace VHS, and that cars were inferior to horses. Today, we have Blu-Ray, Cell Phones, and the Rimac Nevera that’s capable of sprinting to 100 kph in under 2 seconds… I’d note that it’s also significantly more comfortable than a horse. Just like 4G replaced 3G without generating mutant races, 5G and the satellite integrated 6G will replace 4G as the main Mobile Generation (again, without generating mutants).

Jeep, and it’s parent company, Stellantis, has been fairly slow in adopting EVs. While the Fiat 500e and Chrysler Pacifica Hybrid do exist, Stellantis has been dragging its toes compared to other manufacturers. One of my current favorite hybrids, the Jeep Wrangler 4xe uses a hybrid drivetrain rather than a range extender. I’ve of course discussed the shortcomings of this design, but the Jeep Magneto doesn’t bother with gas or an ICE at all. The Magneto Wrangler is instead an electric, two-door goat.

The Magneto is just awesome. Sure, Jeep didn’t bother putting in a 1000 horsepower motor. They put a modest electric motor capable of putting out 285 ponies and 260 lb-ft of torque into the Magneto. It’s almost an exact match in peak numbers as the v6 that graces most Jeeps, but its torque is available from a stand-still. Because Jeep didn’t try to stuff a hugely over-powered motor into the vehicle, they’re able to fit it with a normal manual transmission that uses a clutch, so not only will we get the fun off-roading that Jeep is famed for, but also we’ll get it in a manual. This seems to be the only EV that may potentially come from the factory with a manual transmission installed, and automotive enthusiasts like myself will rejoice in its glory.

One of the undesirable aspects of adding a transmission to an electric vehicle is the high amount of torque that is available from a stand-still. This massive torque is very rough on gears and only a few manufacturers include more than one ratio to translate the motor’s spin to the wheels. The Porsche Taycan is one of these and it’s known to be a fun drive and has demonstrated some impressive drifting. The Ford Mustang Lithium concept that was released at SEMA in 2019 was fitted with a 6 speed, but much more powerful motors than the Magneto. Despite this concept vehicle’s excellent reception, it’s been suggested that the electric Mustang that’s expected in 2023 will only come with an automatic transmission, and probably only a 1-or-2 speed. Of course the Mustang Mach E most certainly isn’t equipped with three pedals.

If Jeep decides to make the Magneto, I think they’d do right by using a smaller, less powerful motor, just like in the concept vehicle. Its modest 285 horsepower is enough for most off-road challenges, and with gearing, it will be able to hit higher speeds and perform low-speed feats of strength that it would be otherwise incapable of. In their Tweet today, Jeep reminded us of that cool little concept vehicle and, with Ford giving us the promise of the Maverick, a tiny truck with big utility, Stellantis sure could use the publicity. 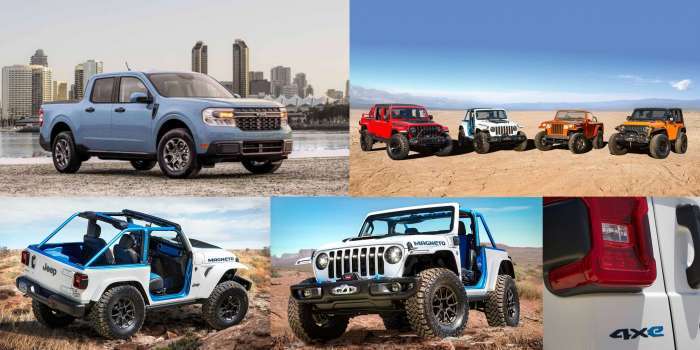 The Jeep Wrangler is a body-on-frame design. This means that it is more rigid and capable of surviving rough impacts than a unibody vehicle like the Hyundai Santa Cruz or that cute truck, the Maverick. A Body-on-frame design is also typically more capable of towing heavier loads, but Jeeps aren’t really made to tow. With its Tweet today, I think it’s safe to conclude that Jeep will be part of Stellantis’ overarching plan to electrify their brands.