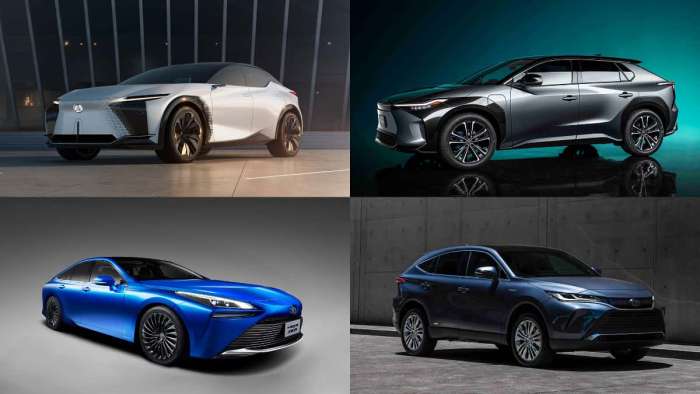 The new plan forward for Toyota is all about BEVs. No kidding.
Advertisement

Toyota learned the meaning of “uncontrollable factors” in business this week. The results of that lesson is that Toyota is now announcing, again, its commitment to electrified vehicles, and yes, battery-electric vehicles (BEVs) are a big part of the newest announcement.

What Are Uncontrollable Factors
In business, and particularly marketing, uncontrollable factors are business environment changes that a company cannot stand in the way of or change to its liking. The “marketing for dummies” class example of uncontrollable factors are often the buggy whip. When horseless carriages emerged in the early part of the 20th century, the folks who made the whips to hit horses pulling carts saw a drastic decline in business. The shift away from internal combustion and to BEVs is a perfect modern example. Toyota’s hybrids are the next buggy whip.

Being Greenest No Longer Counts
Although Toyota has the greenest vehicle models and sales, in most vehicle segments, in all of the markets in which it chooses to dominate, it’s not enough. Policymakers are moving toward BEVs and the automakers will follow. Lawmakers, a meaningful number of whom live in cities and don’t drive themselves anywhere, don’t have an emotional attachment to private transportation, and their advisors counting the heads of the vocal populace they represent understand that it’s BEV or bust going forward with public policy.

Toyota’s Statement Says a Lot
Toyota announced today, “For over 30 years, Toyota has been innovating and investing in technology to reduce vehicle emissions and achieve carbon reductions,” said Chris Reynolds, chief administrative officer, Toyota Motor North America. ”And, although some people believe concentrating resources on one possible solution will achieve the goal more quickly, we believe investing in many different solutions will actually be a faster way to achieve carbon neutrality around the world.” We highlighted "some people."

What that statement means is “We understand that BEVs are the wrong technology for many reasons, but we have no choice but to get on the path to a technology we don’t support because our lobbyists have informed us that the US government is going to incentivize BEVs and eventually outlaw ICE vehicles.” Again, the second quote is our words in case that was unclear.

Have You Heard The One About Hybrodrogen-Powered EVs?
Toyota could not resist including hydrogen-powered fuel cell electric vehicles (FCEV) in its announcement. Those BEV advocates who rolled their eyes at the announcement who also read the details can now smack their foreheads. FCEVs are the EV that even pro-EV people don’t want. Toyota’s shift in thinking is still evolving. Give the company some time to explain why its billion-dollar bet on hydrogen isn’t going to work out.

What Does This Mean For Top Sellers Like the RAV4 Hybrid and RAV4 Prime
Enjoy the short twilight of plug-in hybrids with 600-mile ranges and 40 MPG and 50 MPG gas-electric hybrids without plugs. This writer suspects strongly that the taxpayer-funded price supports that nearly all carmakers and buyers will soon rely upon won’t include PHEVs like the RAV4 Prime and already doesn’t include 40 MPG crossovers like the RAV4 Hybrid. Toyota will continue to trickle them forth since they are already designed and selling well today. There won’t be many more, if any, coming.

Toyota’s BEV Past and Its FCEV Present
Toyota tried battery-electric vehicles before the modern wave we think of today. How long ago was it? The song Candle In the Wind was the top hit of that year. Sort of appropriate. A handful of Toyota’s first-generation and later second-generation BEVs are still on the road. There are Facebook clubs you can join to interact with owners of first and second-generation RAV4 battery-electric crossovers. Toyota also presently “sells” its second-generation Mirai fuel cell electric vehicle in limited markets to the tiny handful of people that live near any place to fuel it.

What About Emission-Free Semi Tractors?
The tractors that pull 18-wheelers are so polluting you can see and smell the pollution coming from them. You can also hear them from more than a mile away as they brake or accelerate. Toyota has zero-emission semi tractors at work in California in a small pilot program right now. Toyota’s new announcement makes no mention of the zero-emission semi-tractors it has been working on. Projects like that can make a meaningful difference in our environment, but there is no advocacy group demanding them, so expect the project to stall in the coming decade. Those resources are needed elsewhere now.

Toyota Looks Back At Its Impact On The Environment
Toyota likes to remind people that it has been making vehicles that have a positive impact on the environment for 30 years. Toyota says that its no longer loved HEVs, PHEVs, and FCEVs have saved 139 million tons of greenhouse-gas emissions worldwide–76 million tons in the U.S. That accomplishment is unmatched by the large full-line automakers combined. Nobody cares because “Tesla’s next car will cost only $5k.”

The Author's View:
Toyota titled its press release, "Toyota's Path To Carbon Neutrality." The title conveys to this green vehicle fan that Toyota is clinging to an old concept. Many EV shoppers/owners/advocates don't really want carbon neutrality anymore. They have moved past that idea. What they primarily want from automakers is gas to be gone. Now. Not later. So, for these vocal advocates of BEVs, any hint that a car company isn't 100% on the fast lane to BEVs is the reason for ridicule. I don't hold that view, but I observe it in my daily research on EVs and shopper trends. If this announcement wins the hearts and minds of the EVangelists that shout down any argument that PHEVs or hybrids are the best solutions for many owners' needs, I will be shocked.

A Second Viewpoint
We are fortunate to have as an affiliate contributor, Dean McManis. Dean is a multiple EV owner past and present. Here's his take: "It is easy to jump on Toyota for moving slowly towards BEVs, and speaking out loud about their reasons for being conservative. But Toyota is just voicing the concerns of many legacy automakers who have invested in ICE technology for decades now. We can applaud Tesla, Rivian, Lucid, and others for being BEV-only advocates, and driving the EV market forward. And we can support big, legacy automakers like VW, GM, Hyundai, and now Ford that have committed to moving to add more BEVs soon. But in the broader spectrum of automakers, Toyota is still moving forward. And despite the fact that they are moving more slowly towards BEVs than they need to, they are still well ahead of countless legacy automakers like Chrysler, who have not even made public plans for any BEVs at all, and are barely moving to add a few plug-in hybrid models today. Experienced EV owners like myself will continue to call Toyota out on their excuses why they are not moving quickly on BEVs yesterday and today, but I'm still encouraging them for the positive EV work that they are doing. Because the world is watching Toyota, along with the other huge, legacy automakers to see if they will lead, go with the flow, drag their feet, or ignore the BEV movement entirely and continue to do business as usual (ICE production)."