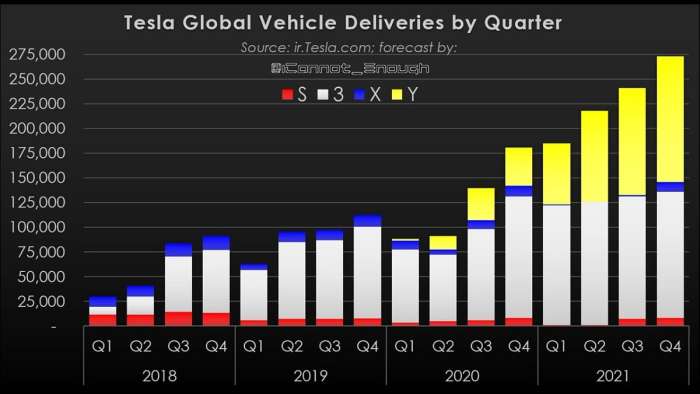 Recently, the Twitter user, James Stephenson, posted 69 Tweets in the most detailed analysis of Tesla I've ever seen. Let's take a look at Tweet #3 of these which focuses on Tesla's delivery of vehicles quarter by quarter, year over year. Here is the details!
Advertisement

Here is Tweet #2, which focused on Tesla's overall revenue growth, quarter by quarter, year over year.

The charts shown by James show deliveries starting in 2018, with the Model S taking just over 1/3 of the deliveries of all Tesla vehicles. At this time, the original Tesla Roadster was no longer being sold. James forecasts Q2, 2021 through Q4, 2021.

Noted is that in Q1, 2018, the Tesla Model S probably sold around 8,000 units with the Model 3 just barely coming online! The Model S used to be Tesla's best selling model!

The Model 3 was Tesla's next car and was designed to appeal to a broader market. In the chart above, the Model 3 is the white bar and you can see more and more deliveries as each quarter has gone by. Even today, the Model 3 is Tesla's best overall vehicle from a delivery standpoint.

The Model 3 will probably be one of Tesla's best sellers for a couple more years.

Tesla has continued to produce more and more Model 3 vehicles and is now producing the Model Y, a car that is designed to give you everything you could want in a car at a price that is more affordable than the Model S and Model X. Tesla Now sells quite a bit Model 3 and Model Y cars and those cars will continue to dominate sales and deliveries until the next year or so.

What Will Tesla Deliver in the Future?

Tesla will eventually release the CyberTruck, with pre-orders of around 1 million vehicles. Once Tesla has its factory ramped up to full production, the CyberTruck will become another best selling vehicle.

Tesla will also release its "Model 2". This is the $25,000 compact car and once this car starts getting produced in mass volume, it's going to be game over for all other auto-makers. Especially if this car can do full self-driving and a robo-taxi fleet comes online.

What do you think about Tesla's delivery metrics? Is the CyberTruck or the Model 2 going to be the next highest delivery vehicle for Tesla? Are there any vehicles that Tesla will deliver in the future?