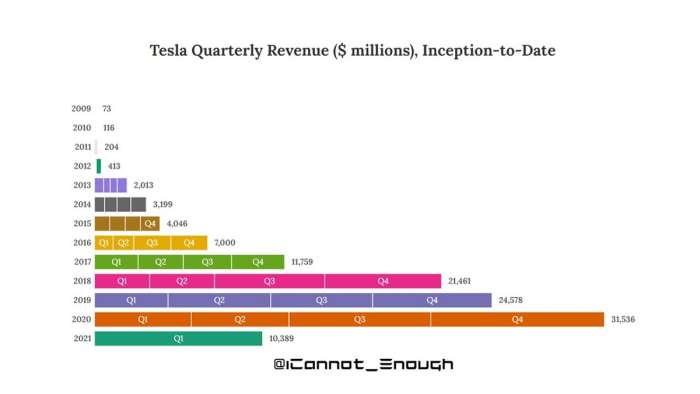 Tesla Revenue Growth - the Growth Story is Just Getting Started

Recently, the Twitter user, James Stephenson, posted 69 Tweets in the most detailed analysis of Tesla I've ever seen. Let's take a look at Tweet #2 of these which focuses on Tesla's revenue growth quarter by quarter, year over year. The result is amazing.
Advertisement

Here's what Tesla's total revenue looks like by year and quarter. These are *actuals*, not my forecast.

It's hard to believe people are still selling this company short and saying "the growth story is over".

I am projecting this kind of revenue growth to continue.
/2 pic.twitter.com/EFbmBJxT27

In the early years of Tesla, back in 2004, when Elon Musk began to get more involved and invested millions of his dollars, Tesla was just getting started. If you look at Tesla's revenue in 2009, it was $73 million dollars. Tesla was far from profitable at this point, but it was beginning the mission to accelerate the world to sustainable energy.

Also notable at this time was the Tesla secret master plan part 1. In a nutshell, it says this:

The sports car is the original Tesla Roadster.

As time went on, Tesla executed on its master plan and built the original Model S. This was June, 2012.

At this time, Tesla's revenue was at $413 million per year. This was over 5 times the revenue from just 3 years ago. I don't know about you, but when I see a company doing 5 times their revenue in 3 years, that equates to about an 180% increase each year. Those investors that saw Tesla's vision at this time and saw the explosive growth, and invested, were very smart.

As time went on, Tesla continued to sell more Model S cars and released its Model X in September, 2015. The Model X was a novel car with car doors opening similar to a Delorean. Once again, Tesla improved upon an existing model S with improvements all around for the Model X.

Time continued on and more affordable models began to be manufactured. In mid, 2017, the Model 3, the cheapest Tesla yet, started to tap into a large market due to the lower cost.

In March, 2020, the Model Y began production and offered a nice blend of cost, performance, and utility. Elon Musk predicts that in a few years, the Tesla Model Y could be the best selling car of its kind in the world.

Is the Growth Story over or Just Getting Started?

The question now is: will Tesla continue to grow at a rapid rate, or is this growth story over? I'm going to have to say that the growth story isn't over and it is continuing. Tesla may not go to 100 times its value that it is now, but I can see it going 20 to 30 times larger than it is, as it begins to build out its Giga factories and make better and better vehicles.

The reason I think the growth story is just getting started is:

What do you think about Tesla and its growth? Is the growth story over or is it just getting started?