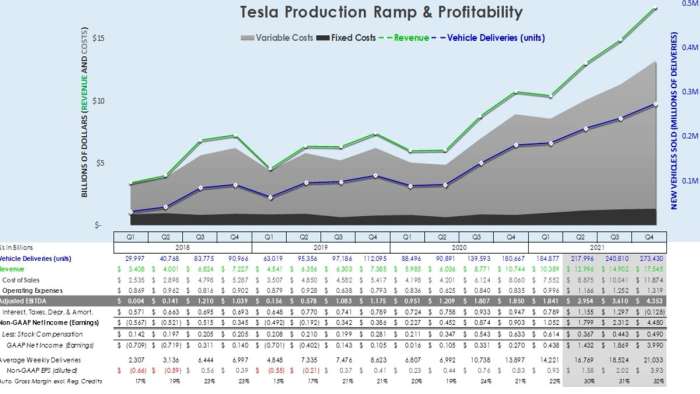 Recently, the Twitter user, James Stephenson, posted 69 Tweets in the most detailed analysis of Tesla I've ever seen. Let's take these and pull out the simple details for them. The first will be Tesla's road map and profitability.
Advertisement

EBITDA stands for earnings before interest, taxes, depreciation, and amortization. This is a good indicator of how profitable a company is and is basically what a company is earning after expenses. There are 3 primary drivers of James predicting a much greater EBITDA. They are:

At some point in Tesla's past, there was a loss of some kind, which James attributes to the negative value for the row just after EBITDA, which is ITDA (interest, taxes, depreciation, and amortization), for Q4, 2021 (his projection). A negative value is a good thing, it means Tesla gets money back in this quarter. It's really an estimate because we don't know when Tesla will decide to realize this loss. Here is what James responded to me with the answer (Tesla has $1.6 billion that they can realize and he is estimating it in Q4, 2021):

It was Warren’s first question:

… and it would have been my first question to me if I’d never seen my forecast before.

But it could hit any quarter, I just forecast it in Q4 because I have to put it somewhere. https://t.co/JHDcfQB1RP

Another predicted driver for this increasing will be full self-driving subscriptions and outright purchases. This will simply add to the bottom line of Tesla as most of the cost is simply the data center and machine learning processing that continues to happen that is already being accounted for. The storage and processing will be greater over time, but the cost of that will be much less than the increase of profit from full self-driving.

Lastly, James mentioned that the quantity of cars from Giga Shanghai and Giga Berlin is only increasing and the profit margin on those cars is much higher than the Tesla factory in Fremont, CA. China has suppliers much closer and overall Tesla's margins are much higher in China.

GAAP Net Income is a measure of a companies final earnings after all expenses including taxes. James shows this being almost $4 billion in Q4, 2021. Many stock prices are based on what is called a price earnings ratio and right now, Tesla is just over 600 for its price earnings ratio (this is considered high).

However, if Tesla achieves the GAAP Net Income that James is describing here, when Tesla has its Q4, 2021 earnings call in early 2022, the trailing twelve months earnings per share will go from where it is now (which is $1) to $7.6, which would make the current stock price of around $600 and price earnings ratio of around 600 to reduce to a price earnings ratio of 79. That's a dramatic reduction and is the reason for Tesla's high price earnings - because the company is growing FAST.

Automotive gross margin is predicted by James to go over 30% in Q2 through Q4 of 2021. I think the three primary drivers for this are:

Full self-driving will greatly add to the value of any Tesla. Elon Musk said that it might even increase the value of a Tesla by 10 times. If an owner of a Tesla can run it as a robo-taxi for a lower cost than Uber and Lyft, then this is indeed true. There are people who have put down $100 deposits for many Tesla cars in hopes that they can operate their own fleet of robo-taxis.

Right now, Tesla has the expenses of its two Giga factories in Shanghai and Berlin, but is not reaping the benefit of cars produced in Berlin and full production ramped in Giga Shanghai. As Tesla's factories expand and Giga Berlin comes online, automotive gross margin will increase.

What do you think about Tesla's future earnings and profitability. I think Tesla is one of the few companies that will survive the decade of automotive disruption. How does energy like the Tesla PowerWall fit into this? Are James numbers too high? If they are too high, what should they be instead?