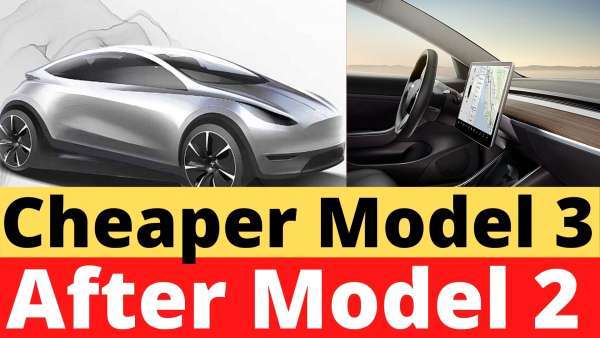 If Tesla Makes Cheaper Model 2 in India, It Will Lower Model 3 Prices Too

Once Tesla builds the affordable under $25,000 new model, expected to be called a Model 2, it may make the Model 3 even cheaper.

First China now and then India? The Indian government wants to persuade Tesla to relocate the production of its vehicles to the subcontinent in order to produce significantly cheaper than in China and thus enable lower end customer prices.

The interesting part of this news is that what will happen to Model 3 once Tesla builds a cheaper Model 2 under $25,000? In India the market for e-vehicles is still very small, nevertheless India could become a production and export center for the world market for this branch and thus soon compete with China. As the news agency Reuters has learned, the country plans to offer corresponding manufacturers of e-vehicles, such as Tesla, high incentives for production in India.

India's Transport Minister Nitin Gadkari said: Instead of assembling the cars in India only, the entire vehicle should be manufactured in the country using regional suppliers. Then we can make even higher concessions to the manufacturers ”Gadkari's promise to Tesla:“ The government will ensure that the production costs for Tesla are lowest compared to the rest of the world, even compared to China. We'll insure it."

Tesla wants and has to get cheaper, writes Lars Schwichtenberg at eFahrer. He says Tesla wants and has to become cheaper in order not to lose touch with the growing e-car market. India could offer good opportunities for this to significantly reduce the costs of the vehicles produced there in the future and thus also to achieve lower prices for buyers. The prices of the cheaper models have meanwhile been reduced several times . But that's not enough for Musk. A fully-fledged, small e-car under 25,000 US dollars should be produced by 2023, it said.

Musk has so far simply lacked a small car that takes into account the limited space, especially in European cities, and thus the requirements of customers there. The construction of the new, smaller vehicle is said to have been approved as early as September 2020. The vehicle, which will reportedly be based on the Model 3 chassis, will function as Tesla's entry-level model and will likely be called Model 2 or Model 1.

So far, there has only been speculation about the technology and appearance of the new Tesla model. Accordingly, it should probably be a smaller four-door model. In the German Gigafactory, too, company boss Elon Musk seems to want to build a small hatchback model in the medium term.

I think once Tesla brings in the new and affordable Model 2, it will also effect the prices of the Model 3. I think the Model 3 prices will fall. What do you think about this? Do you agree with this view?