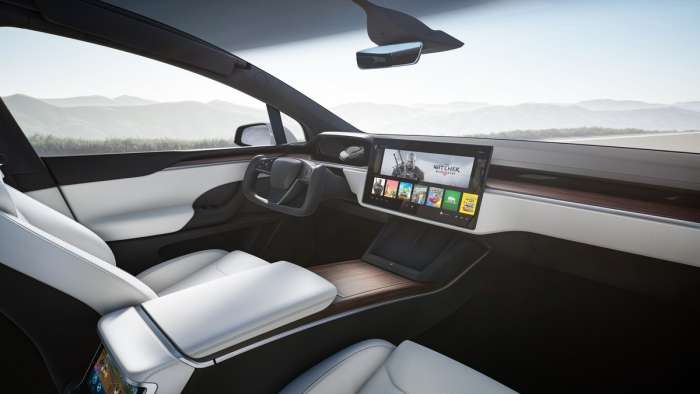 Tesla has made it clear that they don’t plan to drop the yoke steering wheel. The yoke is ultimately the foundation for a car with progressive steering.
Advertisement

There have been a slew of articles talking about the downfalls of the yoke. The critics of the yoke have some good points, but there is a piece of the puzzle they are missing. Many of them don’t talk about where Tesla wants to take this. Tesla wants to install a steer by wire system. Before thinking about the future of Tesla, one has to look at the history of the steering wheel.

History of the steering wheel

The steering wheel has a storied history. Many of the earliest cars didn’t have steering wheels and were controlled by a series of levers. There are videos out there that show how that system of levers worked in those early automobiles. The earliest documented use of a steering wheel was in 1894 by an individual named Alfred P Vacheron. Vacheron slapped a steering wheel onto his 1893 Panhard for the Paris-Rouen race.

Steering wheels initially stood more upright in many early cars. The wheel then became big and circular in lots of cars in the 1950's. Now there are an array of steering wheel designs, and many of them have 3 or 4 spokes, but some cars like the new C8 Corvette only use two.

Tesla has broken orthodoxy with the yoke. There are many out there who have expressed that cars will have no steering wheel in a short time from now. The reality is that we’re living in that future now. There have been driverless cars put together for testing that have no wheel. However, even Tesla whose cars can do most maneuvers without intervention from the driver still had a typical steering wheel up until the yolk. The reality is that the steering wheel probably isn’t going anywhere soon. It may take on a new role in cars that are becoming increasingly autonomous cars, but it doesn’t appear the wheel will be obsolete.

Tesla’s plans with the yoke

Tesla ideally would like to install a steer by wire system. Steer by wire is a system in which steering the car sends electric signals out. There has been criticism that a system like this would remove the driver’s connection to the wheels and the road. This is true, but it seems that car companies like Tesla plan to go ahead with it. Steer by wire is already used in aircrafts. This likely is why aircrafts don’t have round wheels like a car.

The yoke looks cool, and many drivers have said they liked it. The issue is that many of the concerns that have been voiced about the yoke are important points.

Tesla decided to come out with the yoke now, and there is a good chance it won’t backfire. However, the steer by wire technology seems to be a few years out. It isn’t exactly clear whether buyers even want steer by wire. It would be informative to see some polling data on that.

Tesla went ahead with installing the yoke now and it's hard to know why. The yoke does have serious drawbacks such as the fact making tight turns can be hard. There is a photo circulating of a driver with his arms contorted awkwardly trying to steer the car.

John wrote on June 20, 2021 - 11:12pm Permalink
Where do you put the suicide knob?
Gary wrote on June 21, 2021 - 7:59am Permalink
If a positive mechanical connection can be established to allow direct manual steering control in case of an accident or system failure, then steer-by-wire can be legal. Then the dreams began...a yoke could also remain fixed while sensing rotational force; capacitive sensors would detect the presence (or absence of) one or both hands. What was true in the past need not remain so in the present - most computer keyboards still have staggered keys despite the lack of typewriter mechanical hardware.