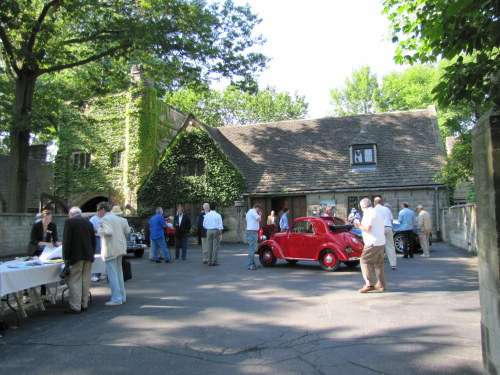 The EyesOn Design Car Show is known worldwide for its creative focus on design themes. In preparation for the 24th annual event, which takes place on Father’s Day, this Sunday, June 19, 2011 on the grounds of the historic Edsel & Eleanor Ford House in Grosse Pointe Shores, Michigan, the media was given insight into the upcoming events plus a view of some auto displays.
Advertisement

Media Day for EyesOn Design is new; and a great idea.

Admission is $20 per person. Children 12 and under are free with adult. Active duty military may enter free with ID.

For the record, the theme for this year’s show is “Designing for the Future.”

Furthermore, this year’s show will present a Lifetime Design Achievement Award to Walter de’Silva, the head of Volkswagen Group Design. He has been chosen as the Lifetime Design Achievement Award winner for the 2011 EyesOn Design Automotive Design Show. The award will be presented to Mr. de’Silva on Friday evening, June 17th at Vision Honored, the formal awards dinner to be held at the historical Ford Piquette Avenue Plant in Detroit.

The award is unique in that only vehicle designers who have previously won the award are allowed to vote. Previous award winners include such designers as Tom Gale, Giorgetto Giugiaro, Chuck Jordan, Shiro Nakamura, Sergio Pininfarina and Jack Telnack among others.

Mr. de’Silva is currently responsible for the design of all Volkswagen Group passenger car brands, including Audi, Bentley, Bugatti, Lamborghini and VW.

When I spoke with Frank Valdez, Chairman for 2011 EyesOn Design, it was obvious the goal for the media day was to raise awareness of the events and the associated organizations.

The Detroit Institute of Ophthalmology (DIO) is the primary recipient, a not-for-profit 501(c)(3) organization in Grosse Point Park, MI founded by Dr. Philip Hessburg. It is extremely devoted to matters pertaining to vision and the eye. That is why two visually-impaired judges demonstrated their process for ‘seeing’ the vehicles with their white-gloved hands. See the next article with video of the event.

The DIO provides support services for the visually impaired through various support groups. In addition, the Institute’s research efforts center on two international research congresses; The Eye and The Chip and The Eye and The Auto.

Each year, EyesON Design picks a unique class of vehicles to showcase in a mini-category. This year, it’s “Design on the Farm.” The media preview example was a 1960 Ford 541 Offset Workmaster tractor, owned by Don Olsen.

Two-wheeled vehciels were included as well, like the 1963 Norton Square Café motorcycle and a 1963 BSA Rocket motorcycle, both owned by Jerry Romano.

The volunteer general chairman for the 2011 EyesOn Design weekend is Frank Valdez. With over two decades of experience at Meadowbrook and other shows, he is one of the most experienced car show executives in the Midwest.

The EyesOn Design events for 2011 include the following:

The Lingenfelter Collection
Saturday, June 18, 2011 9 a.m. – 4 p.m.
Lingenfelter Collection, 7819 Lochlin Drive, Brighton, Michigan
See over 150 Corvettes, muscle cars and rare exotics, including a Bugatti Veyron, an Enzo Ferrari and a
Lamborghini Reventon. The collection is not open to the public, so join us at this private showing which benefits
the Detroit Institute of Ophthalmology.
$15 per person / $20 combo ticket (one admission for this event AND one admission to EyesOn Design Car
Show on Sunday)

robinbrand wrote on June 15, 2011 - 2:48am Permalink
"Auto Insurance Clearance" will give you a break if you buy two or more types of insurance. You may also get a reduction if you have more than one vehicle insured with the same company.