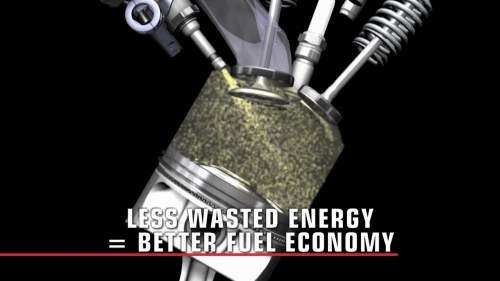 According to the latest Buick news release, across-the-board use of direct injection in the Buick lineup is helping to take translation layers out of the delivery process to reduce both fuel consumption and emissions.
Advertisement

Fact is, direct fuel injection has enabled fuel economy improvements of up to 3 percent on the Buick Enclave, LaCrosse, Regal and the upcoming Verano – without sacrificing performance and still meeting the world’s most-stringent emissions requirements.

Over the past three decades, fuel delivery systems have evolved from the relatively primitive carburetor that relied on the Bernoulli effect to draw fuel through a tiny jet as air accelerated by, to the more-precise throttle body injection that gave way to port and finally direct injection.

For the record, this writer started his design career at Holley Carburetor right after Colt Industries took over the company. I well remember the Bernoulli principle in the venturi area, with a profile much like an airfoil of an airplane wing. At that time, only a few American cars had manifold injection, like the 1963 Corvette.

Today’s high-pressure direct injectors deliver fuel to right the point of combustion in the cylinder so fuel doesn’t get left behind on manifold walls or evaporate up out of a carburetor.

“Spraying fuel directly into the combustion chamber reduces the temperature of the compressed mixture as the fuel evaporates, which enables a higher-compression ratio, allows for more spark advance, and reduces fuel consumption” said Anderson. “The beefier low-end torque and improved drivability of the direct-injected 2.0L turbo makes it a no compromise high-efficiency substitute for a bigger and heavier V6.”

Engines with direct injection also warm up faster thanks to the ability to add a second injection pulse right before the spark plug ignites the fuel following a cold start. This faster warm up can cut emissions of unburned hydrocarbons by up to 25 percent.

With direct injection, the 220 horsepower Buick Regal Turbo beat the Acura TSX by 19 hp and 88 pound-feet of torque from just 2,000 rpm while still achieving up to 32 mpg on the highway, an advantage of 4 mpg.

On the other hand, the Buick Enclave is the most fuel efficient eight-passenger crossover on the market with an EPA estimated 17 mpg city and 24 mpg highway.

It was disconcerting at last year’s SAE World congress when GM engineers could not answer my question as to why all the new engines at GM did not have direct injection. They acted like they did not know.

Now it’s nice to see at least Buick is taking direct fuel injection serious enough to make it across the board.

Of course, I have to ask the next set of questions: When will the rest of GM go this route for all of its car lines? Likewise, when will GM invoke dual fuel beyond ethanol and use natural gas?

An then the final question: When will GM wake up and stop doing incremental improvements when it knows America needs a quantum leap? By that I mean going to an engine design that makes the leap towards maximizing the efficiency of the internal combustion engine. I’m talking 50 mpg minimum here for the city, not just the highway.

Fact is, the only technological step left for the IC Engine is splitting the four cycles into a cold and hot side. And the mandated mileage requirements of 2016 are just around the corner.

For sure the Volt technology is too expensive for the masses. And if you don’t believe that, then ask yourself why less than 2,500 Chevy Volts have been sold; and the Nissan Leaf has not faired any better.

Anonymous wrote on June 5, 2011 - 10:51pm Permalink
You ask why Nissan Leaf sales haven't fared any better? I find this an odd question since Nissan has sold every single Leaf it has produced so far. How do you expect them to sell more when they are supply-locked right now? People who assume that the Leaf sales numbers are because of a lack of demand at this point in time are not bothering to look at the truth that they have customers lined up and can't get the cars off the line fast enough at this moment. You can feel free to make that assumption again in a year or two when they have them on the dealer lots waiting to be sold, but right now they are limited by supply, which will of course lead to low sale numbers. Research your ideas before you blindly assume something...
Frank Sherosky wrote on June 6, 2011 - 2:07pm Permalink
The focus was not on the Leaf, but since you opted to make it one, I will respond. Yes, you are right in that the Leaf is barely out of the gate and the problems in Japan have not helped. Yet the Volt is made here, and it is not faring much better; meaning not flying out of the showooms; and it has an extended driving range. You say back orders are heavy? Well, so does the Volt. Yet, its numbers are still anemic for an historical launch. Every auto launch gets up to speed gradually. If this was the usual automotive launch, though, the maufacturers would have had them in showrooms awaiting the so-called historical demand. Don't get me wrong; I like both vehicles. Truth is, this is the slowest launch by two large OEMs I have ever witnessed, despite all the green and semi-green rhetoric. Fact that the Leaf like the Volt is dependent on government subsidies is most disturbing. Cut those funds off and the story will likely change overnight. Will there be those who will pay the big bucks? Sure! Bottom line is still the same, though: The cost is too high for the masses. And that means cars with gasoline engines with high efficiency will still be a better investment, at least for now. Further add nat-gas as part of dual-fuel sysem, and both EVs will decline until the costs become comparable. Thanks for the comment.
Anonymous wrote on July 3, 2011 - 11:05am Permalink
thanks ford for pushing gm to go to direct injection and turbos without you they would still be building high compression gas guzzling push rod junks.