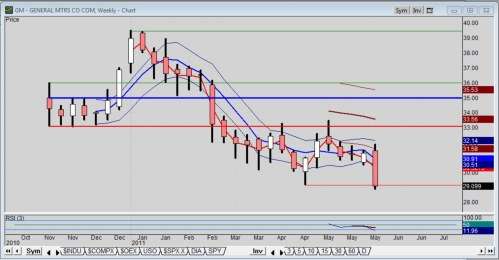 Attention on deck! Since the IPO of the new General Motors Company (NYSE: GM), the stock has failed to meet investor and analysts expectations, with the latest route to a new low, breaking below $29. (Monday, June 6, 2011 Morning Update: GM stock still languishing)
Advertisement

The weekly charts sums it up best for General Motors stock (NYSE: GM). Note that previous low of 29.17 in April has been officially broken intraday to the tune of 28.90. New lows are significant events, because they imply more to come or a bottom event.

Fact is, after completing its 29th week of trading since its IPO, some may wonder if it just coincidence that time has met price at the $29 level. Believers in Gann theory might think it’s significant.

Furthermore, GM stock has not only broken all levels of IPO price support, like the $35 opening, the $33 initial offering, it has also broke the psychologically significant 30 price level once again; and this latest level is a new historical low for the post-IPO stock.

That doesn’t make the government’s investment in GM look very profitable either, does it? I’m sorry, I should have included the taxpayers as the real owners in that investment.

The sell-off action of the general market as noted by the futures market, the ETFs like the SPY, DIA, QQQ and IWM are not helping either. All were down again today, making today's close according to a CNBC report, the fifth straight down week, a first since 2004. Of course Greece and a lack of U.S. jobs were supposedly to blame.

Regardless of what you measure or choose to spin, that doesn’t bode well for auto stocks, let alone GM, which is already in a weak price-technical position.

Where GM stock goes from here is anyone’s guess. If you choose to look for a fundamental reason like a growing auto business in China, or a great acceptance of the Chevy Volt, you still might be disappointed.

Sure, information like that can make those fundamental analysts shiver with joy. However, the technical analysts look at the dynamics of price as a proxies for investor sentiment.

Now, it is well known that the stock market discounts past information and looks forward to the new. And when we look with that set of glasses on, GM stock becomes subject to general market and economic forces which are beyond our control, not that we had much of that anyway.

Unfortunately, as an IPO, GM stock doesn’t have any past history of price dynamics that would clearly define potential support and resistance like mature trading stocks. At this point in time, we know more about upside limits than we know about downside limits.

Truth is, there are no real limits to the downside except zero level. Of course, GM stock has some book value that could stand as a support level, but it also has billions in debt that say otherwise. So, the only recourse for traders and investors alike is to use technical analysis from an absolute reference point.

One of two things will happen next week: The market will pick up due to a dead cat bounce; or the market will slide further under the pressure of this week’s sell-off plus the potential of a QE3 by Bernanke; although I doubt it would be called that to protect the guilty.

As a trader, I cannot ever know for sure what will happen. That may not be what you want to read, but it is the truth; and it’s my attempt at humble admittance that the market knows best, not me.

Perhaps the dollar will set the stage, or oil will send a clear message. Bottom line is, GM stock is in a tough position technically, and has been for many weeks. And since there are no price dynamics known as technicals to guide us, oversold conditions can remain that way for a long time, especially if the general market acts bearish or we get a double dip in this recession.

For the record, this is what I wrote back in April: “Bottom line is, GM is not a stock to trust placing money, in my opinion. Of course it can go up, but it has as much potential to not go up.”

A few weeks before that I wrote, “Once an old high or low is broken as was the weekly low of 30.20 from two weeks ago, means buyers will come in or prices will tumble like a rock from that level.”

Both of those assessment have been spot on.

If you own GM stock, your best bet would be to protect it with put options from any further slide.

If you’re long-term bullish on GM, you’ll simply have to bide your time; of which you may glean some income by selling call options.

On the other hand, if you do not own GM, then pick your spot to buy; but that’s not an easy task.