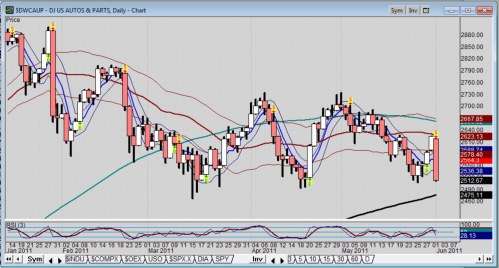 A chart of the Dow Jones US Autos and Parts ($DWCAUP) shows major segments of the auto stock sector following the general market’s downward direction today; in this case, just 37 points from its 200 day moving average.
Advertisement

Whatever was gained in the auto sector the past three days got trashed in one fell market swoop.

The Dow Jones US Autos and Parts ($DWCAUP) is not a true index like the Dow 30 or the S&P 500, but it is the only collection of auto-related stocks in a single basket available to stock investors. Still, major auto stocks and parts companies are reflected in the $DWCAUP.

In the daily chart shown, the candle that represents the entire day’s trading is long; meaning, there was a significant movement to the downside.

This morning, though, the index popped to the downside right at the open, as did the general market which was preceded by the futures market.

In April I wrote about this index and asked whether it was prudent to invest in the auto sector that point. Of course, only you could answer that, but I cautioned the general market was having its sway over trading. In similar fashion that happened today.

Furthermore, aside from the obvious technicals of the chart, like the 200 day moving average (black line) as initial support, the trend bias has been down swings having lower highs and lower lows. In addition, there is a host of fundamental issues to consider.

First, consider the Fed will likely start to wind down QE2 at the end of June. This Quantitative Easing may indeed end slowly over the rest of the year, but it will surely end. And even the hint of it slowing will affect the general market which will affect the auto stock sector.

As I wrote in April, we’ve had historically low interest rates since the economic fall in 2008, but we still have high unemployment. Many believe QE2 is a failure in that respect. Furthermore, low interest rates spawned the commodity bull market, including rises in both gold and silver.

What will happen when Bernanke and company officially turn off the easy money spigot? Will it affect the economy to such a degree the auto sector stock might be drastically affected, at least until all things settle down? And how long might that take. Plus, will there be a QE3?

For sure, the rising cost of oil and its derivative, gasoline have not helped budgets. Fact is, no wind power can match the energy potential of oil, natural gas and gasoline. And despite calls by a Saudi prince to lower oil, the break-even price for oil has risen to $85, the Saudis due to their own economic problems on the home front.

The potential for the US dollar to fall as a reserve currency is real. Only a return to rational thinking and money management by the US government can even begin to curb it; and first on that agenda has to be control over the deficit which the republicans made very plain to the President Obama today.

Bottom line for auto sector stocks: The general market wags the sector, not the other way around. Witness all the autos stocks: Ford - down; GM - down; Toyota - down, and on and on. Only Volkswagen (VLKAY) managed to salvage a minor gain.

sandrasotelo wrote on June 2, 2011 - 3:06am Permalink
yes you can save money on your auto insurance by making few simple changes search on the web for "Auto Insurance Clearance" gave me the lowest rate, most people can simply save money by checking rates with other company.

Toyota vs Tesla: Which Stock To Buy These Days
For Some Former Daimler Managers Daimler Is Authority, While Tesla Is Like a Startup
END_OF_DOCUMENT_TOKEN_TO_BE_REPLACED