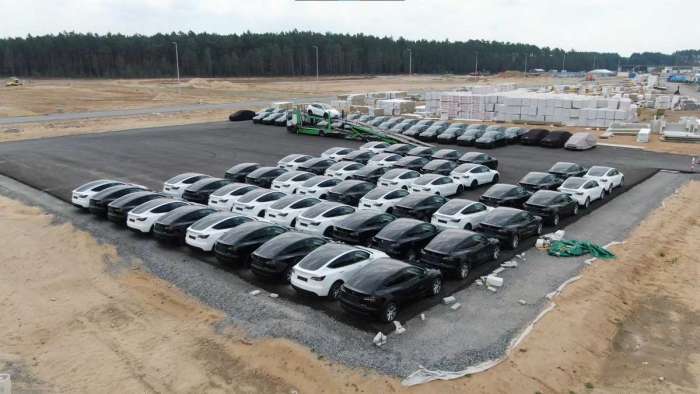 After several months of only selling the Model Y Performance from Giga Berlin, Tesla has finally begun producing the Long Range variant of the all-electric crossover.
Advertisement

Tesla is currently growing vehicle production at a breakneck speed. Just in 2022, Tesla has inaugurated 2 new factories on 2 continents. On top of this Tesla is increasing production capacity at two of its operational plants.

According to Elon Musk, Tesla’s Fremont California plant can increase production by as much as 50%. Recent drone flyovers of the California plant also show the factory busier than at any time in its history.

And in China, Tesla is building a new factory that can produce 450,000 vehicles a year. That is in addition to the expansion work being done to the current factory which already has an annual production rate of 500,000 vehicles.

However, despite all this expansion, Tesla has chosen to restrict initial vehicle production to limited options. Both Tesla’s new factories in Germany and Texas are currently only producing the Model Y.

And given the difficulties associated with ramping up volume production, Telsa’s approach makes sense. Limiting production to a single version allows Tesla to solve issues that inevitably crop up in a timely manner and without risking and losing too much money in the processes.

A few days ago, we reported Tesla has begun producing the Long Range Model Y at Giga Texas, This is in addition to the 4680 version it has been selling for a couple of months now.

And today, thanks to a drone fight over Giga Berlin by Tobias Lindh, we can see Tesla has begun building Model Y Long Range at the factory. In the drone footage, we can see a couple of rows of Model Y with the 19-inch Gemini wheels.

I just noticed: It looks like there are at least two rows of Model Y LR to be delivered from #GigaBerlin. pic.twitter.com/oIeVdblZcN

The previous version of the all-electric crossover Tesla was selling, the Model Y Performance comes standard with the black Ubertrubine wheels. And the whitish silver wheels of the newly spotted vehicles are a good indication that these are indeed the Model Y Long Range variant.

This is great news for anyone interested to get the Model Y. Demand for the vehicle is currently through the roof and has pushed wait times for the Long Range variant to as far as 13 months out.

The high demand has also led Tesla to increase the price of the Model Y by $16,000 just in 2022. However, as Tesla ramps and adds more Model Y variants to the new factories, it will hopefully shorten wait times and decrease the price.

As of now, besides the single drone flight, we don’t have any information regarding when Tesla plans to begin Model Y Long Range deliveries from Giga Texas. However, we will be sure to keep you posted as we get further information.

Until then, visit our site torquenews.com/Tesla regularly for the latest updates.

So what do you think? Excited to learn Tesla has added Model Y Long Range production to Giga Berlin? Also, how do you think this will affect the wait times and the price of the Model Y? Let me know your thoughts in the comments below.