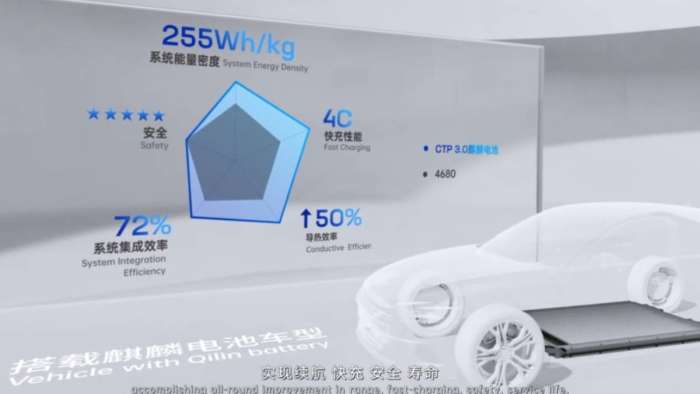 There is an announced battery from CATL, the CTP3.0 battery that has a supposed 621 miles of range to it and various improvement in heat efficiency and energy density. When will this battery come out and will it be better than what Tesla has?
Advertisement

CATL, one of the primary battery manufacturers in China, and a supplier of batteries to Tesla, has released a new battery, the CTP3.0 battery with a power density of up to 225 Wh/Kg.

CATL's new battery was reported by @Sino_Market on Twitter and here are the following specifications for it:

* A world-breaking volume utilization efficiency of 72%
* A range of over 1,000 km or 621 miles
* Increased heat transfer area fourfold
* The thermal control time is cut in half.

225 Wh/Kg is "specific energy" and not "power density". This is often thought of as energy density, but this technically refers to Wh/Liter. Energy is the ability to do work that is stored in the batteries. Power density refers to the power that is immediately available and not the power storage.

What is volume utilization efficiency? I searched for a while online and the best definition I could find was the increase in the ability of an energy system to store, produce, and charge. If this is true, then a 72% increase is very impressive.

The range of over 1,000 km is also impressive. Imagine a Tesla having that kind of range or 621 miles to it. This all depends on how many cells Tesla decides to put in the battery pack for a vehicle, of course, and what the cost of doing so is.

Increased heat transfer is a good thing - it means the battery is less likely to overheat and is also more efficient. The thermal control time being cut in half is also an efficiency improvement to manage the energy transfer and heat of the battery.

What is important to note is that this will definitely not happen with any of Tesla's "standard range" vehicles anytime soon, specifically for the Model 3 and Model Y. Also, with LFP battery systems, there will be a 160 Wh/Kg energy density.

There is a stated 13% more power generation than the 4680 batteries, accomplishing an all-around improvement in range, fast charging, safety, service life, and the efficiency of having lower temperatures throughout the battery system.

These CTP 3.0 batteries are expected to come to the market sometime in 2023. That's an entire year and there's been no mention of whether this will be at the beginning or end of 2023. If it's the end of 2023, I would expect that Tesla will be matching the performance of this battery - or exceeding it - at that time.

Either way, a 621 mile range Tesla is unlikely anytime soon and the reason is cost. Tesla would not add hundreds of miles of range to their vehicles just because they could. Cost optimization and managing profits matters, along with the scarcity of batteries, and I would expect Tesla vehicle range to steadily increase over time with battery improvements, but not jump drastically.

What do you think of this new battery from CATL? Will this battery exceed what Tesla's batteries can do?

DeanMcManis wrote on June 28, 2022 - 12:49am Permalink
There are new "breakthrough" battery announcements made every week. And most of them are only research tech announcements, that could be years away, or never. But CATL is huge, and their claims and timeline for production are specific (well, sometime in 2023). But they have a lot to live up to with this new battery. Hopefully CATL will release the battery for evaluation, and we will get some professional technical reviews of this new battery. It could be a real battery breakthrough, or it could be typical Chinese salesmanship. We will see.