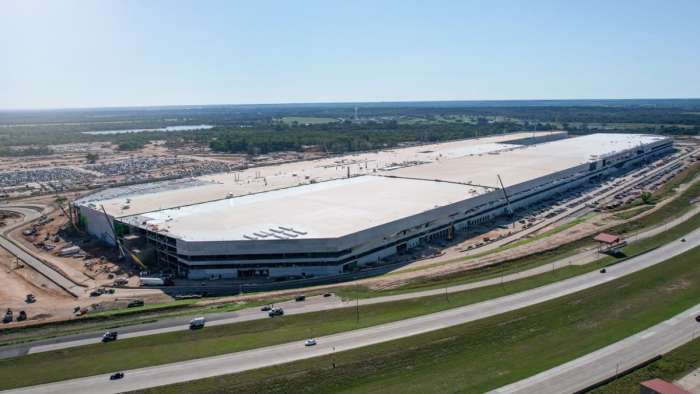 Tesla's Texas Gigafactory, although the largest building in the world, is still slightly less than a mile long. And now Musk says the EV maker will be extending Giga Texas to make it an even mile. Musk also explains the practical reason why Tesla's factories need to be so large.
Advertisement

Tesla is currently expanding its production capacity at an incredible pace. The EV maker is adding a new plant to Giga Shanghai that can produce 400,000 vehicles a year; Tesla is also adding production capacity to its Fremont California plant by as much as 50%. Recent drone flights over the Fremont factory show the plant with more activity than ever before.

In Germany, Tesla is ramping up Giga Berlin production albeit slowly with the plant reportedly only being able to produce 86 vehicles a day. However, new leaks suggest Tesla is planning a significant production ramp at Giga Berlin in the second half of July.

These are some of the production capacity increases Tesla is planning, however, the biggest of all is Giga Texas. When Tesla first opened the plant with the Cyber Rodeo party, Elon Musk said this is the largest production facility in the world.

Musk also compared Giga Texas’ length, with the tallest building in the world such as the Burj Khalifa, which measures 830 meters to the tip. Given all this, you would think Tesla would consider Giga Texas more than large enough.

However, according to Elon Musk’s recent appearance at the All-In conference, the plant still needs to grow a little bit more. And the reason, Giga Texas although the largest building in the world, is still slightly less than a mile.

You might think Tesla wants to have the biggest and greatest factories as some sort of bragging rights, however, during the All-In interview Musk explained the practical reason behind Tesla’s decisions saying…

“for a manufacturing situation, things that really define manufacturing competitiveness are economies of scale and technology. And so if you've got an ace on economy, like if you sort of maximize your ace level on technology and you maximize your ace level on scale, this is obviously going to be the most competitive situation and that's why [Tesla factories] are so freaking giant”

As of now, it’s not exactly clear how Tesla plans to extend Giga Texas. However, we will be sure to keep you posted as the EV maker grows its Austin plant. Until then, make sure to follow our site torquenews.com/Tesla regularly for the latest updates

So what do you think? Excited to see Tesla growing Giga Texas even larger? Do you think it’s worth the effort making the plant exactly a mile long? Let me know your thoughts in the comments below.