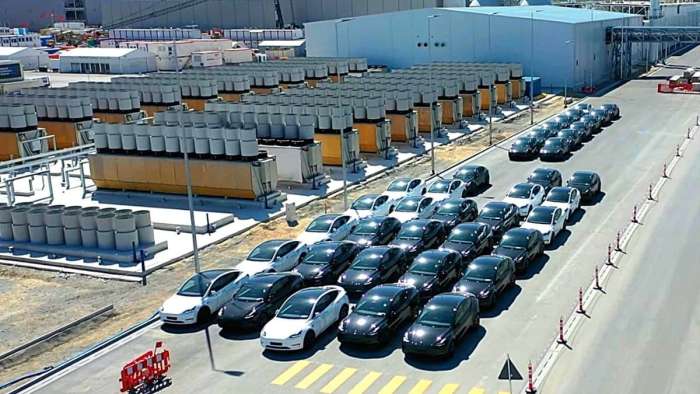 Tesla is making rapid improvements at Giga Berlin to increase the Model Y production. But even with only one shift per day, reducing the station time to a quarter would mean four times of the current production volume, i.e. about 350 Model Ys per day or 7000 per month.
Advertisement

The ramp-up of production at Tesla Giga Berlin is only making moderate progress. This is based on information from two well-informed sources that reached teslamag.de in the past week. According to this information, provided by Teslamag's sources, only 86 Model Y Performance Tesla crossovers are currently produced at Giga Berlin per day, and the work at the individual stations takes about twice as long, instead of the planned 90 seconds.

These Model Y vehicles, made at Giga Berlin, then also have to be intensively revised. However, local production of drives is scheduled to start in June, and a significantly increased pace is planned from the second half of July.

The new Tesla factories in Germany and in the US state of Texas would increase production faster than those in China, CEO Elon Musk said in late April. At the beginning, the ramp-up always looks slow, but then it enters an exponential phase. But at least the German factory is currently lagging behind the Chinese in their early days. For February 2020 as the second month of the Tesla Gigafactory in China, a good 3900 Model 3s were reported to have been produced. For those in Grünheide, which officially started at the end of March, with 86 Model Ys per day and 21 working days in May, there would only be about half in the second full month.

On the one hand quality and on the other hand personnel problems seem to contribute to the German gap to China. For example, Model Ys produced in Grünheide are currently not driven straight to the collection areas on the Gigafactory site, but are initially parked in a cordoned-off area of ​​the factory. There is rework to fix ill-fitting sheet metal, paint defects or scratches. In addition, Tesla is not progressing quickly enough in the search for personnel: teslamag.de was told that there is currently a lack of employees for the commissioning of a second line in the Gigafactory. Brandenburg's Economics Minister recently mentioned a current level of a good 4,000 employees in the German Tesla factory and a second shift from the next quarter. Currently, 50 nations work at Giga Berlin.

It was also confirmed to teslamag.de that drives and batteries for the German Model Y are currently still being supplied entirely from China. It was already running out of energy storage last week, probably because of the lockdown in Shanghai since the end of March: There should still be batteries for about 14 days in Grünheide. At least for the drives, however, local production is planned from June. The outbuilding for this was not even ready when Tesla production started at the end of March, but now the necessary systems have been installed there and the first parts are to be produced next month.

Giga Berlin's Increase Will Start From July With 2-Week Break

The exponential development mentioned by Tesla boss Musk could then start at the end of July. Because at the beginning of the second quarter, German production should be on hold for two weeks for major changes. The new goal is then, among other things with more staff, 30 seconds per station instead of the currently planned 90 seconds and achieved 180 seconds. The final inspection should be distributed to the individual areas, so that rework on actually finished Model Y is no longer necessary. If particularly unsuccessful specimens arrive on the line, they should be taken out of the ongoing process.

All in all, this does not sound like the hoped-for smooth ramp-up, but it also does not sound like devastating problems in the German gigafactory. In any case, the plan remains ambitious. Even with only one shift per day, reducing the station time to a quarter would mean four times the production volume, i.e. about 350 Model Ys per day or 7000 per month. Customers may still have to wait a long time for the Model Y Long Range from the German factory: In Grünheide, there are rumors of 2 million orders for the Model Y Performance from markets that are to be served by the electric car factory in Brandenburg . A request from Tesla for information about production and plans there initially went unanswered.