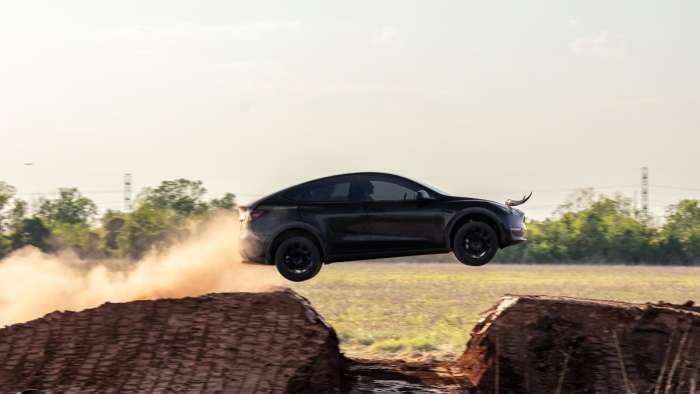 According to new sources, Tesla has begun selling a second variant of the refreshed Model Y with 4680 cells & structural battery pack. The new vehicle, produced in Giga Texas, is a Model Y Long Range and starts $9,500 cheaper than the Long Range Model Y produced at Tesla's Fremont California pant.
Advertisement

Tesla began initial deliveries of the refreshed Model Y, with 4680 cells and a structural battery pack, at the so-called Cyber Rodeo party held to mark the opening of Tesla’s newest factory in Austin Texas.

At the Giga Texas opening ceremony, Tesla did not share the specs of the refreshed Model Y, and all the vehicles at the time went to Tesla employees.

However, soon after we were able to learn a lot about the refreshed Model Y which is the first vehicle to come with Tesla’s purportedly revolutionary 4680 cells and a structural battery pack.

According to Tesla’s Battery Day presentation, the 4680 cells, and structural battery pack design are expected to increase vehicle range by as much as 54%, decrease the weight of the vehicle, improve acceleration, and overall be cheaper and more sustainable to produce.

Given Tesla’s claims, we were expecting when the refreshed Model Y arrives to have a 475 miles range and a 0 to 60 time of under 3 seconds.

However, based on information shared by owners of the refreshed vehicle, we learned that the new Model Y has a 279-mile EPA range, 5 seconds 0 to 60 times, and a starting price of $59,990.

This was somewhat of a shock to Tesla enthusiasts and has even led some to conclude Tesla’s Battery Day presentation was a complete farce.

However, soon after, Tesla sent out an email to employees explaining why the Model Y AWD (Tesla’s name for the refreshed Model Y), despite having the 4680 cells and structural pack, has a shorter range and worse performance than the current Model Y,

According to Tesla, the reason for the lower-than-expected range and performance numbers of the 4680 Model Y is that Tesla has chosen to put a smaller battery pack in the new vehicle.

However, less than two months after introducing the Model Y AWD, today we got our first report that suggests Tesla has started selling a Giga Texa produced Long Range version of the Model Y.

The information comes from a post in the Tesla Model Y Facebook group. According to the Facebook post, a soon-to-be Tesla Model Y owner asks “anyone know about the MYLR [Model Y Long Range] being produced in Austin. Mine is coming next week and VIN shows made in Austin. Will I have a 4680? Ryzen?”

Most people dismissed the post saying the Giga Texas Model Y is the AWD version however, the person shared the VIN of his vehicle showing it is indeed made in Austin. The person also shared his vehicle purchase agreement showing that it’s a Long Range version.

If this wasn’t surprising enough, the new vehicle also has a starting price of $58,440. This is $9,500 cheaper than the current Model Y Long Range which starts at $67,990 but for practically similar specs.

As of now, it’s difficult to wrap our heads around how Tesla was able to introduce a new version of the 4680 Model Y so soon and how the vehicle could be $9,500 cheaper than practically the same vehicle.

However, we will be sure to keep you posted as we get further information. Until then, make sure to visit our site torquenews.com/Tesla regularly for the latest updates.

So what do you think? Surprised to learn Tesla has introduced a new variant of the Model Y from Giga Texas so soon? Also, what do you make of the significant price differences between the Austin and Fremont California-made Long Range Model Y? Let me know your thoughts in the comments below.

For more information check out: Tesla's Biggest Risk Factor For the Coming Years