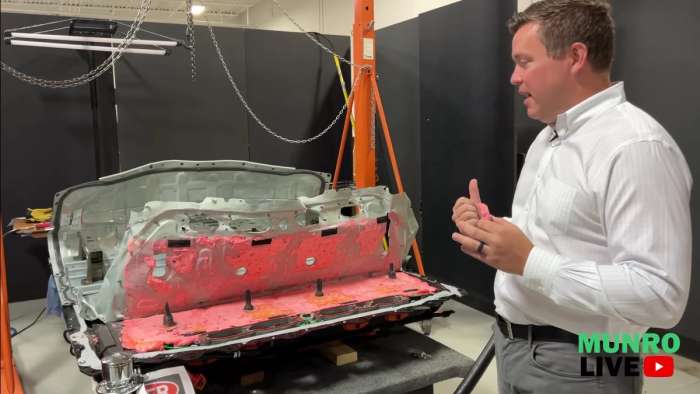 Munro & Associates is currently in the process of tearing down a refreshed Model Y with 4680 cells and a structural pack. And in the tear-down process, they have found getting to the batteries extremely challenging. This has led some individuals to believe the 4680 cells are non-recyclable. However, Elon Musk reassured us that the new cells are indeed recyclable.
Advertisement

Currently, Tesla has two versions of the Model Y out on the market. The first version is the one that Tesla has been selling since 2019 and that comes with the last generation 2170 cells.

And the second version is the refreshed Model Y with the 4680 cells and a structural battery pack. Tesla first started selling this new version of the Model Y at the Giga Texas opening party back in April.

The refreshed Model Y incorporates all the breakthroughs Tesla shared at the company’s Battery Day event which together were supposed to amount to a 54% improvement in range, make the vehicle lighter and improve performance and handling.

This has caused a lot of confusion amongst the Tesla community, the subpar specs of the refreshed Model Y have even led some people to believe Tesla’s Battery Day presentation was a lie.

However, soon after the release of the Model Y AWD, Tesla sent out a letter to employees explaining why the refreshed Model Y, despite coming with the 4680 cells and a structural pack, has lower range and performance numbers than the Model Y Long Range with the last generation 2170 cells and non-structural battery pack.

According to Tesla the main reason for lower specs is that the Model Y AWD is fitted with a smaller battery pack. This explanation, although it answers some questions regarding the specs of the refreshed Model Y sadly raises even bigger questions.

According to the EPA, the Model Y AWD has a “fuel economy” rating of 123 MPGe (Miles Per Gallon equivalent). On its own, this number doesn’t mean much however, when we compare it to the Model Y Long Range, this is where the issues start to crop up.

The Model Y Long Range, with a 330-mile EPA range and a larger battery pack, has a fuel economy rating of 122 MPGe. This is practically equivalent to that of the refreshed Model Y which has a smaller battery pack, and a new cell and architecture that were supposed to make the weight of the vehicle even less.

So if the 4680 Model Y has significantly more energy-dense cells, and a smaller battery pack, why is it not more efficient than Model Y Long Range? Currently, this is the question going through the minds of Tesla watchers.

And lucky for us, we won’t have to wait long to get the answers to this question as Munro & Associates, the engineering firm headed by Sandy Munro, has begun the first tear-down of a 4680 Model Y with a structural pack.

As of now, the Munro Live YouTube channel has shared 3 videos showing various aspects of the refreshed Model Y. One exciting tidbit we were able to see is that in the new Model Y, the seats get directly installed on the battery pack before being mated to the car. 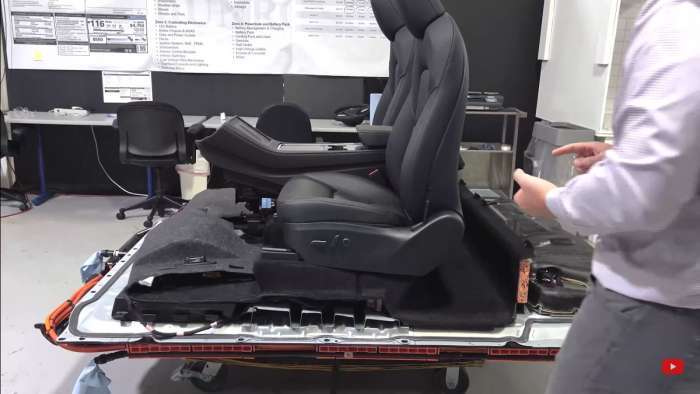 Munro Live has also shared with us other minor changes throughout the vehicle however, the main reason for the teardown, which is to uncover the inner workings of the 4680 cells and the structural battery is still not done.

And the reason this process is taking up more time than anticipated is that Munro & Associates are having difficulties separating the steel cover of the battery pack from the lower portions as the two are strongly bonded together by a pink polyurethane material.

According to Munro & Associates President Cory Steuben, removing this pink material to get through to the batteries “has proven to be much more difficult so when you are talking about a truly structural pack and the repairability of this is essentially zero. It has been a monumental task for our team to get to this point.”

Alex responded by saying “the battery pack seems to be designed for easy large-scale recycling of active materials via the bottom of the pack, not via the top cover.” and tagged Elon Musk for further explanation.

Musk in his response reiterated that the new pack is indeed recyclable saying “no problem to recycle the 4680 pack. Just think of any battery pack as super high-grade ore – it is always better to start with high grade ore than low grade!”

No problem to recycle the 4680 pack. Just think of any battery pack as super high grade ore – it is always better to start with high grade ore than low grade!

This is great news for the environment as recycling batteries will eliminate the need for mining raw materials which is the biggest source of pollution when it comes to battery electric vehicles.

Having said that, the destructive process Munro & Associates has been forced to use to open the 4680 pack still leaves questions on repairability and ease of recyclability. We will be sure to bring you the answers to these questions when Munro Live posts the next video of the refreshed Model Y tear-down process.

So what do you think? Excited to learn the 4680 packs are recyclable? Also, how would you feel if you learned that the structural pack is unrepairable? Let me know your thoughts in the comments below.