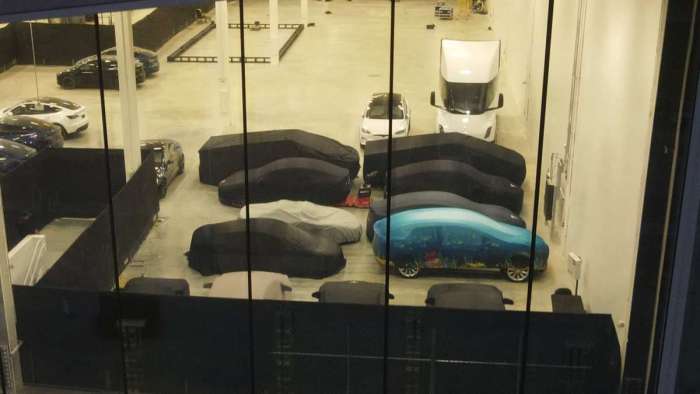 At a recent flyover of Tesla's Texas Gigafactory, we spot two different-sized Cybertruck prototypes parked next to each other. The 2 prototypes were under a car cover still, the difference is easily noticeable.
Advertisement

Tesla announced the Cybertruck back in 2019. At the unveiling event, CEO Elon Musk said production will begin in late 2021. However, by the middle of 2021, Tesla updated the company’s online configurator stating Cybertruck deliveries will not begin until 2022.

At the time, most Tesla analysts expected Cybertruck production to begin in early 2022. However, at Tesla’s AI Day presentation, held in August 2021, Musk made comments which suggest the futuristic truck won’t come until August 2022.

Musk’s comments at the time confirmed that the Cybertruck has been delayed to the second half of 2022. However, that wasn’t the end of the delays. At Tesla’s Q4 2021 earnings call, held early this year, Musk said Tesla plans to begin Cybertruck production “hopefully come next year” further delaying production of the truck to 2023.

And recently, during the Model Y delivery event at Giga Berlin, Musk made further comments regarding Cybertruck’s production which suggest that volume production might be delayed to late 2023 or perhaps as far out as 2024.

The delays have certainly been disappointing for the more than a million Cybertruck reservation holders. However, a recent drone flyover over Giga Texas by Joe Tegtmeyer gives us hope that Tesla hasn’t totally put Cybertruck’s development on the back burner. Joe flew his drone over the Texas gigafactory 2 days before the factory’s opening part, officially called Cyber Rodeo.

In his 23 minute video, Joe shows Giga Texas’ construction progress, but even more interestingly, we get to see multiple clad Tesla vehicles presumable covered until the Cyber Rodeo party.

From the shapes of the covered vehicles, we can make out the first-generation Roadster, a couple of Model Ys, and Model X. However, stealing the show, we get to see two different-sized Cybertrucks parked one in front of the other.

Related news: Tesla Is Benchmarking The Lucid Air At Its Fremont Factory

Although the vehicles are entirely covered, from their outline, we can clearly see the one on the right is bigger than the one on the left. Most likely, the larger-sized Cybertruck is the original prototype unveiled back in 2019.

And the smaller one is most likely, the more finalized prototype recently spotted testing at Tesla’s Fremont California plant. Musk has said the final Cybertruck design has been shrunk by about 3% overall.

Having both Cybertruck prototypes present at the Cyber Rodeo party will be a great opportunity for attendees to see what changes Tesla made. Musk has previously hinted at laser windshield wipers for the redesigned Cybertruck, in addition, there have also been rumors of a quad motor Cybertruck that can go 0 to 60 in 1.99 seconds.

As of now, the vehicles are completely covered and any differences between the two prototypes are impossible to make out. However, we should have a more clear image at the Cyber Rodeo event on April 7. We will be sure to keep you posted as we get more information. Until then, make sure to visit our site torquenews.com/Tesla regularly for the latest updates.

So what do you think? Excited to see 2 different-sized Cybertruck prototypes together? Do you think one of them could be the smaller Cybertruck Musk has promised to build for Europe? Let me know your thoughts in the comments below.