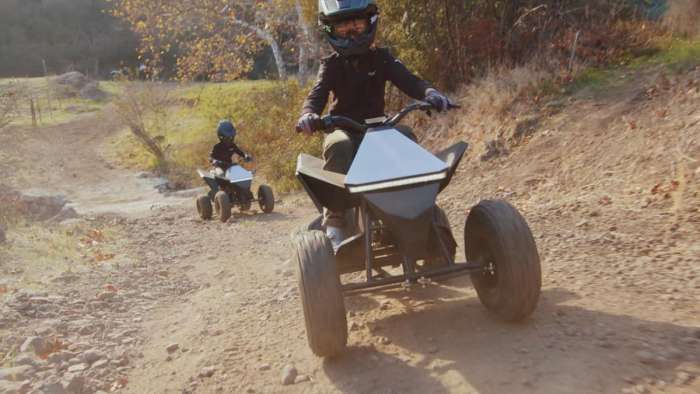 Tesla has introduced a new Cybertruck inspired ATV called the Cyberquad for Kids. The vehicle is produced in partnership with Radio Flyer and is meant for Children. However, the ATV is so impressive and overpowered it can possibly work for smaller adults.
Advertisement

Tesla announced the Cybertruck back in 2019. At the unveiling event, in addition to the futuristic full-sized truck, the EV maker also showed off a four-wheel ATV (all-terrain vehicle). Tesla calls the Cybertruck inspired ATV, Cyberquad.

According to Tesla, the Cyberquad is initially expected to be offered as a Cybertruck accessory, meaning it can only be ordered as an option with a Cybertruck order. In the past, Elon Musk speaking about the Cyberquad has said “the ATV is an interesting design challenge because ATVs are pretty dangerous, we want to make an ATV that is the least dangerous.”

Besides Musk’s aspiration to make the safest ATV, there isn’t much known about the Cyberquad’s specs. All the information we have so far includes that it can carry two people, it will have a really low center of gravity because the battery packs will be placed down low, and according to Musk the Cyberquad will also have a suspension that will ensure the vehicle won’t roll.”

Get ready for any adventure with the all-electric Cyberquad for Kids. Inspired by our iconic Cybertruck design, the four-wheel ATV features a full steel frame, cushioned seat, and adjustable suspension with rear disk braking and LED light bars. Powered by a lithium-ion battery with up to 15 miles of range and a configurable top speed of 10 mph, Cyberquad for Kids is suitable for anyone 8-years old and up.

Additional specs of the Cyberquad for Kids include a 150lbs maximum weight carrying capacity, 36V lithium-ion battery, and performance disc brakes. The Cyberquad for kids is so over-specced it actually feels like it will be able to handle smaller adults with no problem.

Currently, Tesla is selling the Cyberquad for Kids on the EV maker’s website for $1,900 apiece. Deliveries are expected to begin in the next 2 to 4 weeks. Unlike the Cyberwhitle which sold out within minutes, you can still buy the Cybertquad online in the Tesla store.

Related news: Camp Mode Lets You Camp the Night Away in Your Tesla

Just from the specs and Tesla’s description, the Cyberquad for Kids is certainly shaping up to be the EV maker’s most exciting novelty product. As of now, this is all the information we have on the miniature ATV but, we will be sure to keep you up to date as more information comes out. Make sure to visit our site torquenews.com/Tesla regularly for the latest news.

So what do you think? Excited about Cyberquad for Kids? With 150 lbs carrying capacity do you think it is good enough for adults? Let me know your thoughts down in the comments below.