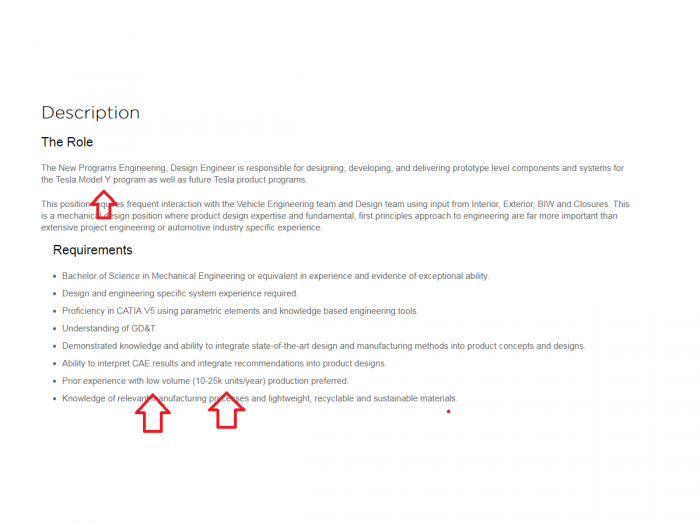 A job posting for a new position at Tesla hints that the company isn’t expecting to sell very many.
Advertisement

Tesla’s Model 3 was meant to be selling in the range of about 20,000 units per month by the end of 2017. We all know that the launch of the Tesla Model 3 was a disaster, but going forward we assume Tesla will get its production line and delivery services in order and, eventually, be selling the new luxury compact car hand over fist. But what about the next Tesla model, a crossover called Y. What are Tesla’s sales goals for that model? One would assume higher since crossovers outsell cars these days. Nope.

A new job posting at the Tesla.com Careers page may have revealed how many Model Y crossovers the company plans to build. The job is for a mechanical design engineer (hey, that was the author’s college major). The Role section states, “The New Programs Engineering, Design Engineer is responsible for designing, developing, and delivering prototype level components and systems for the Tesla Model Y program as well as future Tesla product programs.” There is then a long description of all the responsibilities and qualifications required. None are much of a surprise until we get to the end.

In addition to a BSME degree and a lot of CADD experience (which is part of the course of study going back to the 1980s) the successful candidate should note that “Prior experience with low volume (10-25k units/year) production preferred.”

So by dividing by 12 months per year, we come up with about 800 to 2,100 units per month for the product that the new Tesla employee will be engaged in developing. Almost exactly the number of Model S, Model X, and Model 3 cars Tesla has always averaged. That sure does not coincide with the volume that Elon Musk predicted when he told investors during a shareholders’ meeting. Musk said, “I mean, also to be clear like the priority vehicle development after the Model 3 would be the Model Y, the compact SUV because that’s also a car that where we expect to see demand in the 500,000 to 1,000,000 unit per year level.”

See the posting here until Tesla takes it down.