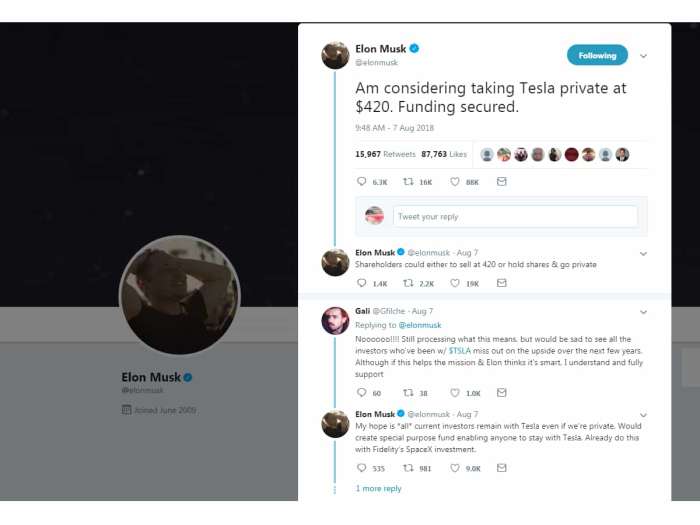 The Securities and Exchange Commission (SEC) filed suit against the CEO of Tesla, Inc. Elon Musk on Thursday, September 27th, 2018. The suit by the SEC has been filed in federal district court in the Southern District of New York. It alleges Musk violated antifraud provisions of the federal securities laws, and seeks a permanent injunction, disgorgement, civil penalties, and a bar prohibiting Musk from serving as an officer or director of a public company. In other words, Musk will be out at Tesla if the SEC wins and gets what it is asking for.

The suit alleges that Elon Musk engaged in fraud by prematurely and improperly announcing that he had plans underway to take the publically traded company private and that shareholders would be reimbursed at share price higher (significantly higher) than the stock value at that time.

Musk had been under investigation by the SEC since shortly after this now infamous tweet was released and then further supported by Musk in subsequent tweets and in other ways. Musk included the phrase "Funding secured." Media outlets are reporting that the SEC says in its filing today that "In truth and in fact, Musk had not even discussed, much less confirmed, key deal terms, including price, with any potential funding source." Musk says that the funding he referred to was from big oil. Specifically, Saudi oil profits in an investment fund.

Here is a quote from the SEC posted to its media page: "On August 7, 2018, Musk tweeted to his 22 million Twitter followers that he could take Tesla private at $420 per share (a substantial premium to its trading price at the time), that funding for the transaction had been secured, and that the only remaining uncertainty was a shareholder vote. The SEC’s complaint alleges that, in truth, Musk had not discussed specific deal terms with any potential financing partners, and he allegedly knew that the potential transaction was uncertain and subject to numerous contingencies. According to the SEC’s complaint, Musk’s tweets caused Tesla’s stock price to jump by over six percent on August 7, and led to significant market disruption."

The SEC suit was announced late Thursday after trading had closed. At that time, Tesla stock was valued at $308 per share. Upon the opening of the market the following morning, the value had dropped to $269.

DeanMcManis wrote on September 29, 2018 - 7:41pm Permalink
Today the SEC quickly settled the charges. Musk will remain CEO, but lose his seat on the board for 3 years, and Musk and Tesla will pay a $20 million dollar fine each.