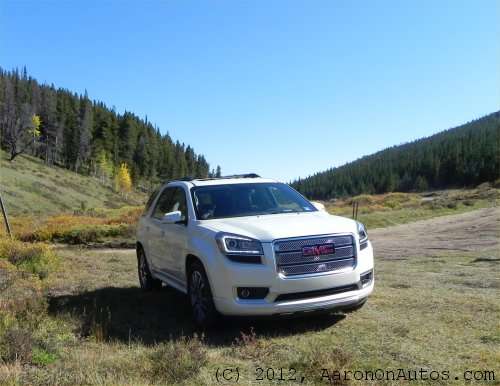 The re-designed and re-appointed 3-row, full-sized SUV gets priced in both its base level and high-end Denali trims. New standard features also detailed.
Advertisement

General Motors Corporation has announced manufacturer's suggested retail pricing for the base level and top-level trims in the all-new 2013 Acadia. Along with upgraded interior materials, new standard features such as Rear Park Assist, a rearview camera, a leather-wrapped steering wheel with audio controls, Color Touch Radio with HD radio, a USB port, signature LED daytime running lights, and interior ambient lighting are included at the base level.

Most Acadia trim levels will also come standard with IntelliLink connectivity and the industry's first front-center air bag, designed to protect the driver and front passenger during a side-impact crash. The Denali upper trim level includes standard telescoping steering, Head-Up Display, Side Blind Zone Alert, and Rear Cross Traffic Alert. The latter two are safety features which alert the driver when something is in the blind zone either next to the vehicle or behind and approaching, such as in a parking lot when exiting a parking stall.

New design features include the LED daytime running lights in an offset horseshoe pattern, a smoother and less aggressive front clip (Denali trims retain their signature rounded mesh grille pattern), a more sleek body that cuts away some of the former boxiness, and finer interior amenities. The Acadia is one of the few 3-row SUVs which can realistically seat full-sized adults in the third row.

The Acadia sports a larger, more powerful 3.6-liter direct-injected V6 variable valve train (VVT) and six-speed automatic transmission in all trim levels. Despite the larger displacement (up from 3.0L), fuel economy has improved to 17/24 city/highway mpg. The 2013 Acadia's 3.6L produces 288 horsepower and 270 lb-ft of torque at 6,300 and 3,400 RPM respectively. Towing capacity is a respectable 5,200 pounds. It is being built at GMC's Lansing Delta Township, Michigan plant.

Most of us attending the recent Rocky Mountain Automotive Press 4xFall event that drove the 2013 Acadia Denali were very impressed with the combination of power, trim level, and economy. It was, in my opinion, one of the smoothest highway drivers in the day's lineup of SUVs.