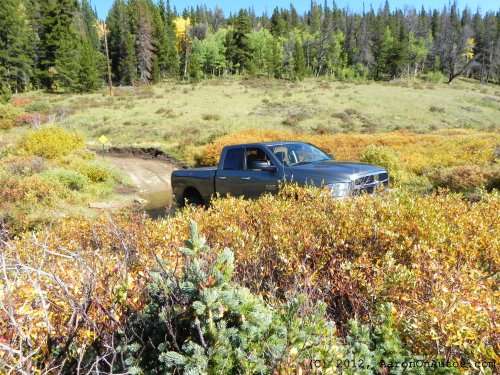 RMAP members, including our own Don Bain and Aaron Turpen, had the unique opportunity to take a dozen crossovers, SUVs, and trucks into the Rocky Mountains for some off-road adventures. Several 2013 models were on hand to climb rocks and sling mud.
Advertisement

The Rocky Mountain Automotive Press held its first annual 4xFall event, which puts journalists together with manufacturers in unique off road situations under the beautiful fall colors on the high altitude of Colorado's Rocky Mountains. On hand were twelve vehicles, many of which were 2013 model year trucks and SUVs that will not be in showrooms for several more weeks.

This year's 4xFall began in historic downtown Boulder, Colorado where breakfast was followed by a presentation by sponsor GMC, who showcased the new 2013 Acadia and Terrain, both in Denali trim and all-wheel-drive (AWD). Following this, we all chose a vehicle from the impressive lineup of offerings from the seven manufacturers on hand and drove to an abandoned mining town called Caribou, high in the foothills at an altitude of just over 10,000 feet.

There, several tracks and trails are open to off road enthusiasts and take you through some of the most beautiful scenery in the world. This was accentuated even further by heavy rains the day before, washing everything into a clean newness that belied the slow color changing death that is fall in the mountains of Colorado.

Three trails were marked and designated for the vehicles on hand, based on their capabilities and the trail's difficulty. After a few hours, which allowed each of the 20 or so journalists attending time with each vehicle, we formed a caravan down the hill to nearby Nederlands, Colorado for lunch, sponsored by Ram Trucks, whose game-changing 2013 Ram 1500 V6 and V8 models were a big part of our day. We then formed another caravan and began down the winding and scenic dirt track towards Boulder called Switzer Trail. During this trek, we stopped to swap vehicles occasionally, allowing us more time in each of the offerings during the two hour crawl down the mountain.

The vehicles on hand for this year's 4xFall and my quick impressions of each follow.

2013 GMC Terrain Denali AWD - a large and in charge SUV, this machine is a very comfortable ride both on and off road and was one of the smoothest highway drivers in the lineup.

2013 Hyundai Santa Fe Sport 2.0T AWD - is a great offering from this Korean automaker and is one of their best-sellers in the U.S. for good reason.

2012 Infiniti QX56 - is a very posh machine with excellent off road capability. It shares some supply components with Land Rover and it definitely shows.

2012 Jeep Grand Cherokee - was in its highest trim and definitely ready for action, despite it's over-comfortable appearance. Chrysler representative Wendy Orthman's bubbly sarcasm only added to the fun.

2013 Jeep Wrangler - not many changes to the Wrangler this model year, but even without the added Rubicon fittings (which we witnessed at RMDE earlier this year), the Jeep remains the King of Off Road.

2013 Kia Sorento EX AWD - the Korean automaker is working hard to make a name for itself with segment-unique styling and value. The Sorento definitely emphasizes these points and shows why this company grows every year.

2013 Kia Sportage SX AWD - is another solid offering from this company, offering a comfortable ride and great value.

2012 Nissan Frontier Pro-4x - is the current of this capable model's long history of surprising offroad prowess. I was comfortable enough in this truck to carry on an easy conversation with Steve Perrett, Nissan's regional representative, while piloting over rocks and stumps in hard core off-track situations.

2012 Nissan XTerra Pro-4x - has the same capability of the Frontier, but in an SUV format.

2013 Ram 1500 V6 4x4 - is a basically all-new offering from Ram Trucks. Body styling hasn't changed much, but a lot of improvements underneath the skin are immediately noticeable behind the wheel. This truck will drastically change this stagnant market segment.

2013 Ram 1500 V8 4x4 - was brought to us in base model configuration, showing that even in its lowest trim level, the Ram comes well prepared for hard, daily use.