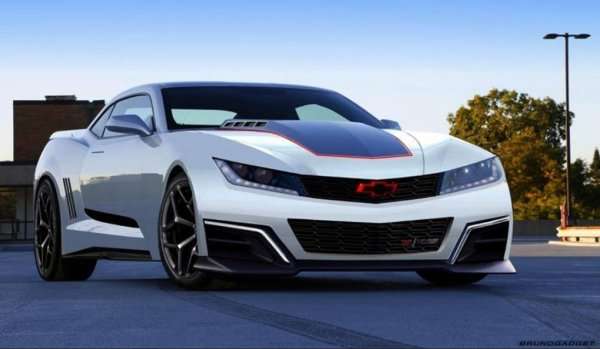 Now This is a 2016 Chevrolet Camaro Rendering I Could Love

It has been at least a few weeks since we featured any images of the 2016 Chevrolet Camaro as imagined by an automotive artist, but having come across this 6th gen Camaro design from Brunogadget, I wanted to introduce it for conversation – as this is a Camaro design that I really, really like.
Advertisement

We have featured a handful of 2016 Chevrolet Camaro renderings that have surfaced online and they have ranged in their basic design from mild to wild. This new 6g Camaro rendering is a nice mix of the two; incorporating the basic design of the current Camaro with a super aggressive facelift that might not be true to life – but I think that it is awesome.

For those wondering who Brunogadget is, an internet search revealed that he is a popular photoshop artist at Camaro5.com. He does photo editing work for the members, changing colors of other members’ cars, adding stripes, etc…and in this case, he has penned a cool rendering of the 2016 Camaro.

An Evolution of the 5th gen Camaro
While some rumors suggested that the 2016 Chevrolet Camaro would draw more of its styling from the 1970 Camaro with a long, narrow body design, General Motors insiders have been quoted as saying that the 2016 Camaro would look more like a facelifted 2015 Camaro. The 6th generation Camaro is expected to be an evolution of the current models rather than introducing an entirely new look like we had between the 3rd and 4th generation or between the 4th and 5th generation. These expectations have been backed up by spyshots of a 2016 Camaro test car that looks a great deal like the current generation Camaro.

In looking over this image above of the 2016 Chevrolet Camaro, you might notice that this car really looks like a current (2010-2014) Camaro with some unique shading along the sides and a revamped front end. Critics will say “all he did was change the front end”, but from what we can see, those could be the only major changes with the actual 2016 Camaro.

This imagined 2016 Camaro front end has a hood that dips much further towards the ground than does the current design, giving this 6th gen Camaro a curvier look while the big, bulging hood helps to preserve the muscular feel of the GM muscle car. The grille and headlight design is similar to the current generation, except the deeper dipping hood has pushed the grille down a bit while the headlights are left higher up – giving the Camaro a very angry look. There is also a huge lower grille opening for improved cooling, large vents on the corners to help cool the brakes and an aggressive splitter/dive plane design that gives this Camaro a race ready look. Fittingly, he has also added the Z/28 logo to the lower grille as there is no way that the “normal” 6th gen Camaro will be this aggressive – but the Z/28 could be.

Realistically, this Camaro is probably a touch too aggressive in the angling of the grille and headlights, as well as in the location of the front of the hood. While I love the look of this Camaro front end, I wouldn’t expect to see something this angular – even though it would make for one great looking 2016 Camaro…in my opinion anyway.

Auto Motive wrote on August 7, 2014 - 3:05pm Permalink
Absolutely stunning. The only change is carbon fiber 360, front and rear spoilers and side rails. Lastly a carbon fiber hood. Hopefully this new gen Camaro will loose at least 300 lbs and get down to 3500-3600 lbs. At this weight the LT4 Z engine will be competitive with the hellcat. If the ZL1 has the LT4 option I will consider this before getting the hellcat. Great design.
Rathmullan wrote on August 8, 2014 - 10:35am Permalink
Sorry, Too much 5th gen and not enough 2nd gen for my taste. The ground effects might make sense for a Z/28 variant but seems a bit overwrought and impractical for a daily driver.