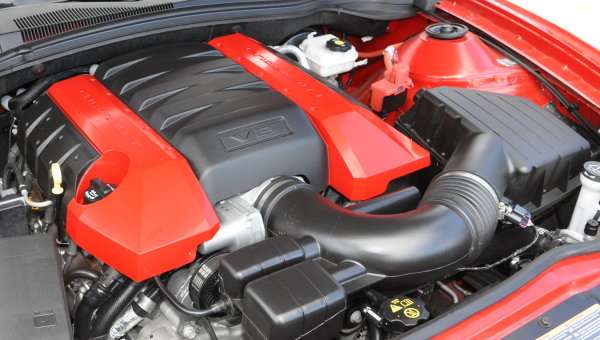 We expect that the 6th generation Chevrolet Camaro which will likely arrive for the 2016 model year will be powered by a V6, a naturally aspirated V8 and a supercharged V8, the reveal of the 2015 Ford Mustang and 2015 Dodge Challenger power figures leads us to take a guess as to the power figures of the 2016 Camaro when it arrives sometime next year.
Advertisement

Since before we knew anything about the 2015 Ford Mustang or the 2016 Chevrolet Camaro, the introduction of the 2014 Chevrolet Corvette Stingray with the new LT1 V8 offered a hint as to what might power the next generation Camaro. The Camaro has traditionally been powered by the same engine as the Corvette, traditionally a model year or two after the engine in question debuts in the Corvette so in this case I fully expect to see the LT1 V8 from the Corvette Stingray to power the 2016 Camaro SS.

It is common sense that the 2016 Camaro will also have a base model V6 for the LS and LT models along with a supercharged V8 that will power the future Camaro ZL1 or some other ultra high performance model. There is also the possibility of a 4-cylinder turbocharged model, but I have my doubts that we will see a turbo-4 right away.

We know what we can expect the engine lineup for the 2016 Chevrolet Camaro to look like, but what about power figures? Today, TorqueNews takes a look at what we could see from the 6th gen Camaro.

The Base V6
The current Chevrolet Camaro in both LS and LT trimlines is powered by a 3.6L V6 that is used pretty much across the entire GM vehicle lineup. If a Chevy, Cadillac, Buick or GMC brand has a V6 – it is some variation of the 3.6L mill that offers owners of the 2014 Camaro 323 horsepower and 278lb-ft of torque. That is a fair amount more horsepower and a similar torque output to the 2015 Mustang base V6 that offers 300hp and 280lb-ft of torque. That is also 13 more horsepower than the new Mustang EcoBoost, although the turbocharged 4-cylinder Mustang packs 22lb-ft more torque than the current Camaro V6.

Based on those numbers, I wouldn’t expect to see a big power increase for the 2016 Chevrolet Camaro LS or LT – unless GM opts to beef up the V6 to fight the EcoBoost. It seems unlikely that GM could tune the 3.6L V6 enough to squeeze out more torque than what you get from the turbo Mustang, but a touch more horsepower and a bit more torque could make a big difference.

The Camaro SS
I expect very much that the 2016 Chevrolet Camaro SS will be powered by the same LT1 that is offered in the Corvette Stingray. For 2016, I believe that the Camaro will offer a touch less than the 455 horsepower and 460lb-ft of torque that is featured by the Stingray – something like 450 horsepower and 450lb-ft of torque. This will allow the Camaro SS bragging rights over the Mustang GT, while still leaving a small gap between itself and the Corvette. Of course, there have been rumors that the Stingray will get a jump in power for 2016 to something in the area of 475hp, which would allow GM to give the Camaro SS 460 horsepower without any concern of the Camaro posing too much of a challenge to the Corvette.

Should GM get the Camaro SS up to 460-470 horsepower, it would not only have a significantly higher power level than the 2015 Ford Mustang GT, but it would also come very close to the new 2015 Dodge Challenger Scat Pack with 485hp.

The Super Camaro
While it is hard to say if it will still be called the ZL1, I expect to see a new super Camaro for the 6th generation...although it might not arrive for the 2016 model year. Much like Ford holding off on introducing the new Shelby Mustang, GM might keep the next Camaro ZL1 in their pocket until the interest in the 6th generation Camaro SS has faded a bit. In any case, I expect that the 2016/2017 Camaro ZL1 will pack the same LT4 that will motivate the 2015 Corvette Z06. This engine will deliver 650 horsepower and 650lb-ft of torque under the hood of the Z06 so even if GM detunes the LT4 a bit, it will still be a great deal more powerful than the current ZL1 with 580hp and 556lb-ft of torque. GM could load the ZL1 with something like 625 horsepower and 635lb-ft of torque and it would be much stronger than the current models. It would still be less powerful than the Hellcat Challenger, but I expect that GM will not go after the Hellcat with the Camaro until they have increased the power of the Z06 to more than 700hp.

The 4-Cylinder Question
The 2015 Ford Mustang EcoBoost is powered by a 2.3L turbocharged 4-cylinder that will offer 310 horsepower, 320lb-ft of torque and likely the best fuel economy by a muscle car ever. Some insist that since Ford is introducing a turbocharged 4-cylinder Mustang, General Motors will roll out a Camaro with a similar turbocharged engine. However, GM officials have stated that there would not be a 4-cylinder Camaro in the near future – and I’m inclined to buy the comments of the folks calling the shot before I buy the rumors.

Rumors also suggest that the next generation 2016 Chevrolet Camaro will be introduced at the 2015 North American International Auto Show in Detroit…but that isn’t official so it could debut before that in LA – or after the Detroit show in either Chicago or New York.

Rathmullan wrote on August 5, 2014 - 3:43pm Permalink
I think and hope your assessment is accurate Patrick. Assuming GM can knock a few hundred pounds off of the 6th generation Camaro by moving to the Alpha platform, all those engines will make the Camaro a fierce competitor (including a 625 Horse ZL1 against the heavy Hellcat Challenger). Should GM offer an SS Camaro with the LT1 paired to either the old (yet venerable) 6L90 auto transmission or the newer 8 Speed auto transmission, I will be first in line ordering one at my local Chevy dealer!!
Brian wrote on August 5, 2014 - 7:19pm Permalink
I agree you and I will be in a fight to get to that line first! I think the new camaro will run circles around those other 2 tubs of shit!
OneQuickSS wrote on August 6, 2014 - 11:02am Permalink
Been loving my SS since 2010 and I am definitely curious about the next generation coming in 2016 but the one thing that would for sure get me in line day 1 would be if they were to bring back T-tops. Oh what I wouldn't give for that.....
Brian wrote on August 7, 2014 - 3:28am Permalink
Can they still do t tops with the crash ratings today
musclehead wrote on August 24, 2014 - 1:20pm Permalink
Actually the ecoboost offers 42lb-ft more torque then the V6 Camaro not 22lb-ft. Mustang I4 ecoboost 320 TQ - Camaro V6 272 TQ. I would love to see a race between the 2.
Brian wrote on August 25, 2014 - 8:41pm Permalink
If somebody's worrying about what lower range engine's are going to be in the new camaro then you must not be a gear head! Last I checked nobody cares about the non v8 engine choices!
Kerry Jon Kirby wrote on November 15, 2014 - 5:04am Permalink
I think you are fairly accurate. I also think thereis a possibilty for a midscale RS with a gen V 5.3-5.5 liter but not the truck engine more likely one based on the LS3 with about 425HP or the 3.6 twin turbo with the 450 that the ATS-V called the RS/SS that would be capable of over 30 mpg. The Z28 lightened like the 2015; but will have a LT1 bore to a 396 with DI with about 525hp or they may stay with the 427 but add DI should make about 555hp. Either way with the DI will have more power and be slightly more economical. That said,with the same suspenion work and less weight you would have a super track car even better than the current one, but the price point on the Z28 is way to high it should be in the 50-55k range right now. I would also expect and hope that LT1 396 bore may just be on the new Grand Sport Corvette for 2016 as a midlevel upgrade to the Z06 with lighter magnesium 19" wheels and titanium exhaust, less speakersmore carbon probably 75-100 pounds lighter as well as havethe Z06 body package probably coming in at 65k base for those wanting a stronger Vette but not quite Z06 level. It would probably the perfect blend. 0-60mph about 3.5 seconds, 11.5quarter and 201mph top speed with the 8 peed auto or the new dual clutch they are working on.
cliff wrote on February 23, 2015 - 1:17am Permalink
I think they should go all out with the SS...like they did with the LT5 vette back in the 90s...that thing got 457hp when it wad said and done with...had the DOHC style heads and better intake...put that kind of power in the new SS and make it even lighter by doing as they did in the z28. Thinner glass (but still street and safety legal) lighter but comfortable material in the seats along with the lighter wheels on top of the weight already deducted from the SS for the 2016 model year and put the no-lift-shift clutch for the 6sp. Make this camaro give ford and dodge fans something to remember. I PROMISE you....you do that to this 2016 model SS and there isn't gonna be much coming off the lot that's gonna be able to touch it.