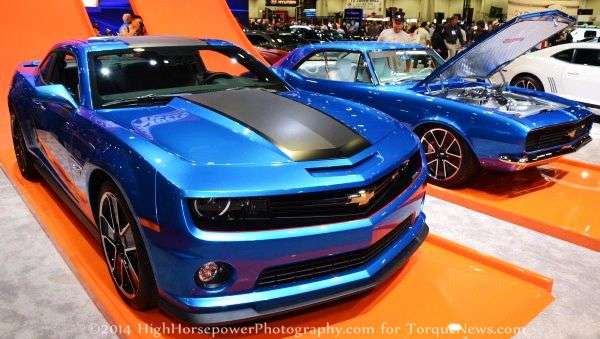 The 2014 Woodward Dream Cruise will introduce attendees to the newest model specific show area as the new Camaro Corral is introduced to rival Mustang Alley; with the Chevrolet sponsored area offering space for 150 Camaros at this year’s world renown rolling car show.
Advertisement

For years now, the Ford Motor Company display at the Woodward Dream Cruise has had a massive area known as Mustang Alley, which is filled with every imaginable Mustang from the last 50 years. There have always been plenty of Chevrolet Camaros in attendance at the Dream Cruise and while there are parking areas dominated by the bowtie clad muscle car, Camaro owners have never had a specific parking area along Woodward that is similar to Mustang Alley – until 2014.

The 2014 Woodward Dream Cruise will include the new Camaro Corral, which is just south of I696 along Woodward Avenue (near 10 mile and Woodward). Sponsored by Chevrolet and organized by Brian Meissen of MIFBody.com, the Camaro Corral will give Camaro fans a chance to check out a huge collection of their favorite muscle car in one place, while also giving Camaro owners an area where they can show off their car with other Camaros across the 5 generations.

The Camaro Corral Will Showcase the History of the Chevy Muscle Car
One of the most interesting aspects of Mustang Alley is that you can see the evolution of the Ford pony car from 1964 to the present model year and that is what will make the Camaro Corral so interesting as well. Seeing so many different Camaro models from the last 48 years will illustrate how much the car has changed, while also showing how design cues from the older models helped to shape the newest Camaro. It is this walk through the evolution of the model that will draw spectators to the Camaro Corral in much the same way that people are drawn to Mustang Alley.

Of course, you will have your Camaro, Chevrolet and GM fans who come to the Camaro Corral because they love the model and want to see 150 of them parked in one parking area, but the detail of the area will also draw those folks who love cars in general.

Now, I’m sure that my Camaro hating readers will point out that the Camaro Corral is much smaller than Mustang Alley, with space for ‘only” 150 Camaros falling well short of the 800+ cars that will line Mustang Alley. However, considering that this is the first time the Chevrolet has sponsored an area for the Camaro, this could be the first step towards a Camaro Corral that could rival the Mustang display in coming years.

There Is Still Space Available
With the 2014 Woodward Dream Cruise a few weeks away, there is still space available in the new Camaro Corral so if you have a Camaro, you are headed to Woodward for the big event and you want to park your car with a large group of Camaro owners, you will need to head to the official Camaro Corral Facebook page by clicking here and speak with Brian Meissen to reserve your spot. Oh, and did I mention that it is free to Camaro owners? Again, with space limited to just 150 spots and the Camaro being one of the most popular vehicles at the Dream Cruise, parking is likely to be at a premium so don’t delay! As this piece is published on TorqueNews, Brian has accepted reservations for 76 of the 150 spots so about half are spoken for with less than a month before the August 16th date of the big event.