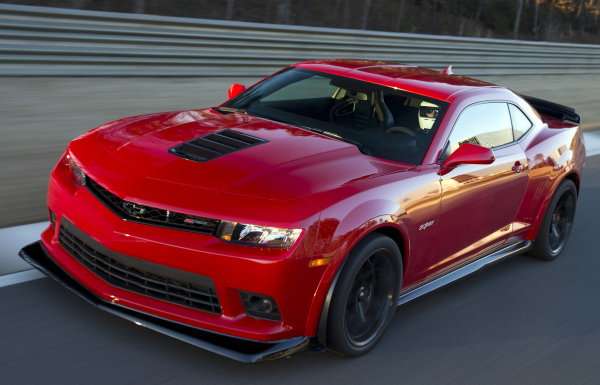 For the 4th straight month and the 5th time this year, there were more Chevrolet Camaro models sold than any other sports car in America – comfortably crushing both the Ford Mustang and the Dodge Challenger while also building the lead in the annual sales race.
Advertisement

In July 2014, there was an interesting occurrence in the muscle car segment as while prospective Mustang buyers are waiting for the 2015 models, Chevrolet Camaro buyers are snatching up new models left and right. July was one of the best sales months for the Camaro in the past few years and it was the best July since 1995! On the other hand, things were slow for both the Ford Mustang and the Dodge Challenger as hopeful owners of those two American muscle cars wait patiently for the 2015 models to arrive – and for the discounts that hit the 2014 models when the new units arrive. This means that there was a distinct drop in sales for those two models and that allowed the Camaro to hand out a serious sales sheet beating last month.

The Camaro Builds a Bigger Lead
The Chevrolet Camaro moved 9,961 new models in July 2014, marking the best July since 1995 and the second best month of 2014 while also representing a huge increase over the same month in 2013. We know that there is a new Camaro on the way in the next year to 18 months, but that sure isnt slowing people down from buying the current models. In fact, the strong sales of the GM muscle car have allowed it to move 12% move units this year than they did through the first seven months of 2013 – up to 56,633 on the year. That lofty figure has helped the Camaro widen its lead over the Ford Mustang in the 2014 muscle car sales race to almost 5,900 units. At this rate, the introduction of the 2015 Ford Mustang later this year might not bring about a big enough sales spike for the Mustang to catch the Camaro and prevent GM from claiming the title of the bestselling sports car in America for the 5th straight year.

The Mustang Stumbles as Buyers Wait for 2015 Models
As expected, sales numbers for the Ford Mustang continued to slump in July as consumers wait for the arrival of the new 2015 Mustang – and the big incentives that will come for the 2014 models once the 2015s are in dealerships. With 6,564 new Mustangs sold in July, Ford had one of its worst muscle car sales months of the year, but Ford knows that there are greener pastures ahead. We can expect to see a big spike in Mustang sales once the 2015 models arrive, both for the sales of new models as well as a jump in 2014 model year sales thanks to the dealership incentives to get the “old” models off of the lot.

The Dodge Challenger Also Sees a Drop with the Upcoming 2015 Models
The Dodge Challenger is always the “worst selling” of the American muscle cars, but with 4,294 examples of the brawny coupe sold last month, it is still one of the bestselling sports cars in America. 4,294 units is a fairly poor month for the Challenger, but like the Mustang, I would expect to see this lull in sales followed by a big spike when the 2015 models arrive. The 2015 Dodge Challenger introduces a new look on the outside, a far nicer interior and a revamped drivetrain lineup that includes the stunning new Hellcat Hemi. The Hellcat models may not bring about a big spike, but the new and improved SXT, R/T and Scat Pack models will most certainly help the Challenger post some big sales numbers over the few months following the dealership debut.