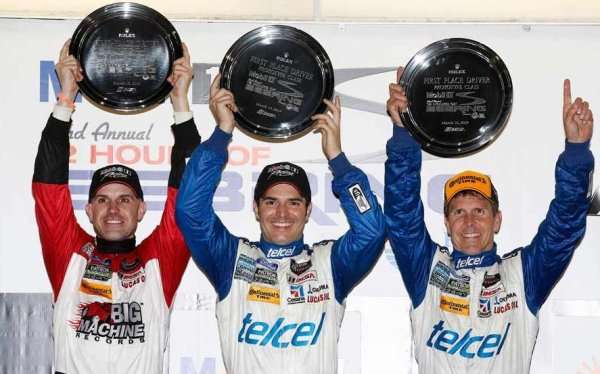 The Ford F150 EcoBoost Engine Wins the 12 Hours of Sebring

The Ford F150 EcoBoost V6 continues to show that it really can do everything as this powerful twin turbocharged engine helped win the 2014 12 Hours of Sebring endurance race – marking the first endurance racing win for the EcoBoost in only its second try.
Advertisement

While the 2014 IMSA endurance racing season is just two events old, the Corvette Daytona Prototype race cars have dominated the Prototype class in which the Riley Technologies Ford EcoBoost powered cars compete. Ford announced their new partnership with Riley during the offseason and unlike the Corvette prototype cars which are powered by a big V8, the new Riley Ford race cars would feature the same EcoBoost engine that powers the Ford Taurus SHO, the Ford F150 and a handful of other Ford Motor Company vehicles. Well, this EcoBoost V6 obviously isn’t the exact same engine that we find under the hood of so many new Ford F150 pickups, but this race ready mill is based directly on the same engine that powers the hardest working new F150s.

The Ford EcoBoost Riley race cars didn’t get the start to the season that they had hoped as the Corvette Daytona Prototype (DP) race cars dominated the Rolex 24 at Daytona and the winter Sebring testing. A Corvette DP also claimed the top starting spot for the 12 Hours of Sebring while the EcoBoost cars grabbed the 6th, 9th and 11th starting positions. However, the Ford EcoBoost race cars were among the quickest cars on the track during the final testing sessions last week leading up to the historic road race in Florida.

The 2014 12 Hours of Sebring race was among the most competitive in the 62 year history of the race with an astonishing 30 lead changes and throughout the race, the Ford EcoBoost race cars found themselves in the hunt. The Riley race cars did well in the early stages at Daytona, but faded through the middle of the race while the Corvette DPs built a big enough lead to eventually claim the top five finishing positions. At Sebring, the EcoBoost cars wouldn’t fade so as the final stages of the race played out – the Ford powered Riley race cars were battling for the lead. When the Honda leading the race came down pit road for its final stop of the 12 hour long race, the #01 Ford took the lead and never looked back. With a half hour left and a comfortable lead, it appeared as though the Ford EcoBoost Riley team would cruise to victory, but a late race caution bunched up the field and forced a 20 minute shootout to the checkered flag. The #01 EcoBoost Ford Riley was able to hold off the #1 Honda to claim the Sebring win – allowing Ganassi Racing drivers Scott Pruett, Memo Rojas and Marino Franchitti to stand on the top step of the podium.

Since the Ford 3.5L V6 EcoBoost engine was introduced a few years back for the F150, skeptics have questioned the durability of such a hardworking turbocharged V6. Ford conducted a handful of publicity stunts to show just how durable this twin turbo V6 is in almost any condition including finishing the Baja 1000 with a production spec EcoBoost V6 from the F150. While the V6 EcoBoost engine used by the Riley Technologies race cars are far from production specifications, winning such a major race in the world of motorsports further shows how tough this boosted V6 is – even under the most grueling conditions in the world of racing.

As mentioned above, the #1 Honda HPD ARX-03b finished second, followed by the #5 Action Express Corvette Daytona Prototype (the team that won the Rolex 24 and qualified first overall) finished third. A Nissan powered Morgan race car and another Honda rounded out the top five in the 2014 running of the 12 Hours of Sebring.